In Photos: A Three-Day Mass Sit-In Demonstration at Jantar Mantar for 'Greater Tripraland'

The Tipraha Indigenous Progressive Regional Alliance's demand for the separate state of 'Greater Tripraland' emerged in light of a dwindling indigenous population, now making up less than 30% of Tripura's total. 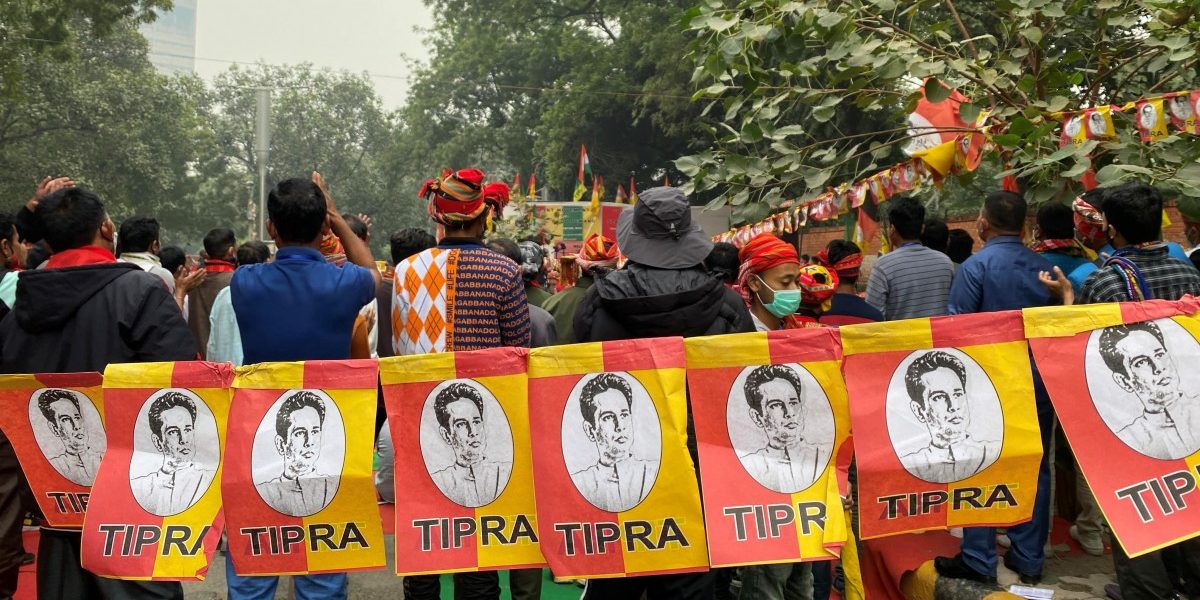 New Delhi: A crowd of over 1,500 supporters and members of two of Tripura’s regional parties  – the Indigenous People’s Front of Tripura (IPFT) and the Tipraha Indigenous Progressive Regional Alliance (TIPRA) – have been camping out at New Delhi’s Jantar Mantar since November 29, raising slogans for creation of ‘Greater Tipraland’.

The party leaders, who have the support of as many as 55 civil society organisations from the Northeastern state, have raised the demand through a three-day mass sit-in demonstration in the national capital, citing as its cause the “question of survival” of the indigenous tribal population of Tripura, which borders Bangladesh. IPFT supporters with the demand for Tipraland painted on their bodies. Photo: Sangeeta Barooah Pisharoty/The Wire

While the demand for ‘Tipraland’ has been raised earlier by the IPFT, an ally of the ruling BJP government in the state, TIPRA president and erstwhile king of the princely state of Tripura, Pradyot Manikya Debbarman is leading from the front in calling for a ‘Greater Tipraland’. 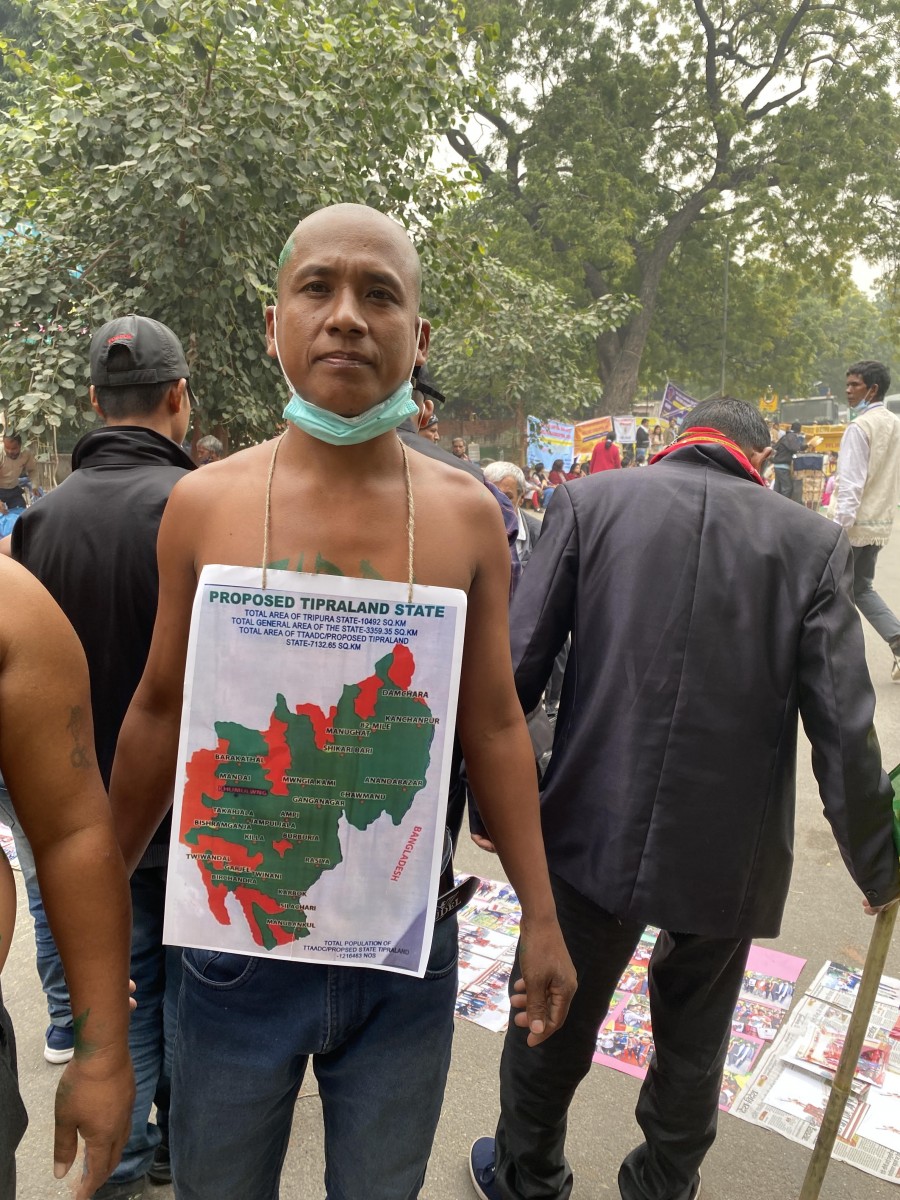 A supporter of the ‘Greater Tipraland’ hanging a map of the proposed state from his neck. Photo: Sangeeta Barooah Pisharoty/The Wire

While stating that both these demands are the same, Debbarman has also spoken about including Tripuris residing outside of the Tripura Tribal Areas Autonomous District Council (TTAADC) in the model. The TTAADC is led by the TIPRA, with Debbarman as its chairperson.

When The Wire visited the sit-in demonstration on its last day – December 1 – a large number of participants who had travelled from the border state were seen holding TIPRA and IPFT flags, along with the national flag. The majority of the participants were women, mostly clad in their traditional outfits and jewellery. A participant looking for his photograph among a row of images clicked by local photographers at the protest site which had been put up for sale. Photo: Sangeeta Barooah Pisharoty/The Wire

TIPRA has a considerable support-base among tribal women voters. Debbarman had announced not only one year maternity leave and one month with paid leave to women employees of the TTAADC, but also paternity leave, a first in the Northeast. Speaking to The Wire, Debbarman, present at Jantar Mantar, said, “We, all indigenous people, have decided to come forward for Thansa, the unity of all our tribal people for our betterment, by shedding our political identity and personal interest. Not only IPFT, we are being supported by 55 civil society organisations.”

In these three-days, Congress leaders Jairam Ramesh and Deepender Hooda, Priyanka Chaturvedi from Shiv Sena and Sanjay Singh from Aam Aadmi Party, among others, have addressed the supporters. “The regional party from Assam, the Assam Jatiya Parishad (AJP) has also shown its support for our demand. Independent Lok sabha MP from Assam, Naba Sarania, came here, too, to extend his support,” Debbarman added.

The long-pending demand for a separate state for Tiprasas has hinged on the fact that the indigenous tribal community has now been reduced to around 30% of the state’s population, principally due to influx of non-tribal Bengali speakers from across the border, during and after Partition. When categorically asked if the movement is against the Bengali speakers of the state, who are now in the majority, Debbarman said, “We are not against any community. We have people from the Bengali community supporting us too. People from all faiths are here. Also, since the time TIPRA came to power at the TTAADC, there has been no violence in our areas. The entire violence can be seen outside, in Agartala.”

Debbarman was referring to the recent violence during the state’s civic polls, allegedly unleashed by the ruling BJP on members and supporters of opposition parties. Highlighting the win of TIPRA candidate, Seba Kalai, in those polls from Ambassa, he stated, “It is for the first time a tribal person has won an urban seat in these elections.”