The Bengal chief minister held a rally at Shantiniketan, where former BJP chief Amit Shah had done the same a few days ago. 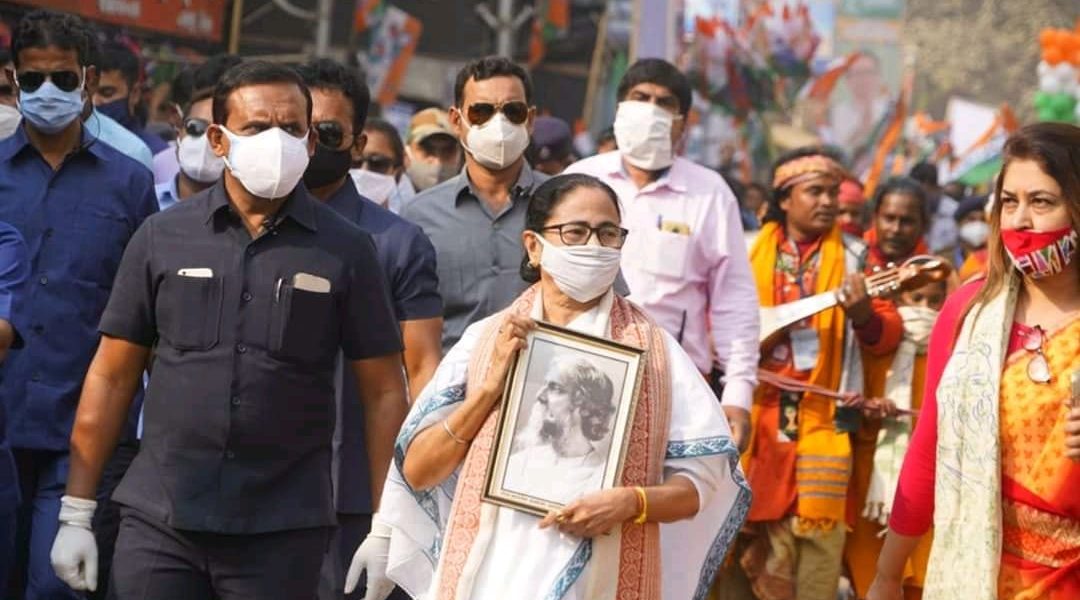 Mamata Banerjee in Shantiniketan on December 29. Photo: By arrangement.

Shantiniketan: People thronged the streets of Shantiniketan, the university town founded by Rabindranath Tagore, as early as 8.30 am, for West Bengal chief minister Mamata Banerjee’s roadshow at noon.

“We are here for Didi,” said Manju Saha, a 48-year-old resident of Suri block who arrived at Banerjee’s rally with her daughter.

As time passed, crowds swelled at the Tourist Lodge crossing, dhak (indigenous drum) players assembled, and bauls (folk singers of the region) gathered with their instruments. Two trucks decorated in tricolours, and a blown up portrait of Rabindranath Tagore arrived at the location. A bust of the bard was placed atop the truck. Songs by Tagore played loud.

Banerjee arrived a little after noon and walked towards Tagore’s statue at the Jambuni crossing, around 4 kilometres from the starting point.

A longtime Trinamool Congress (TMC) leader from Bolpur told The Wire, “She is the most popular leader in the state, even BJP admits that. Amit Shah or Modi can’t match her in Bengal. We were always confident of this kind of turnout.”

Banerjee’s roadshow took place just nine days after Union home minister Amit Shah held a similar one in Shantiniketan. While addressing the crowd, Shah had said, “Today’s rally clearly reflects that the people of West Bengal have decided to wipe out the corrupt TMC government.”

These pictures clearly reflect that the people of West Bengal have decided to wipe out the corrupt TMC government. #BengalWithBJP pic.twitter.com/tbwY4tDFLB

“Unlike BJP, we didn’t get people from other districts and states. I called people only from four blocks. We were expecting around 2.5 lakh people. My workers are saying it is over three lakhs. I want to thank the people of Birbhum. There is only one mass leader in Bengal, that is Mamata Banerjee,” TMC district president of Birbhum and a close aide of Banerjee, Anubrata Mondal, told The Wire. 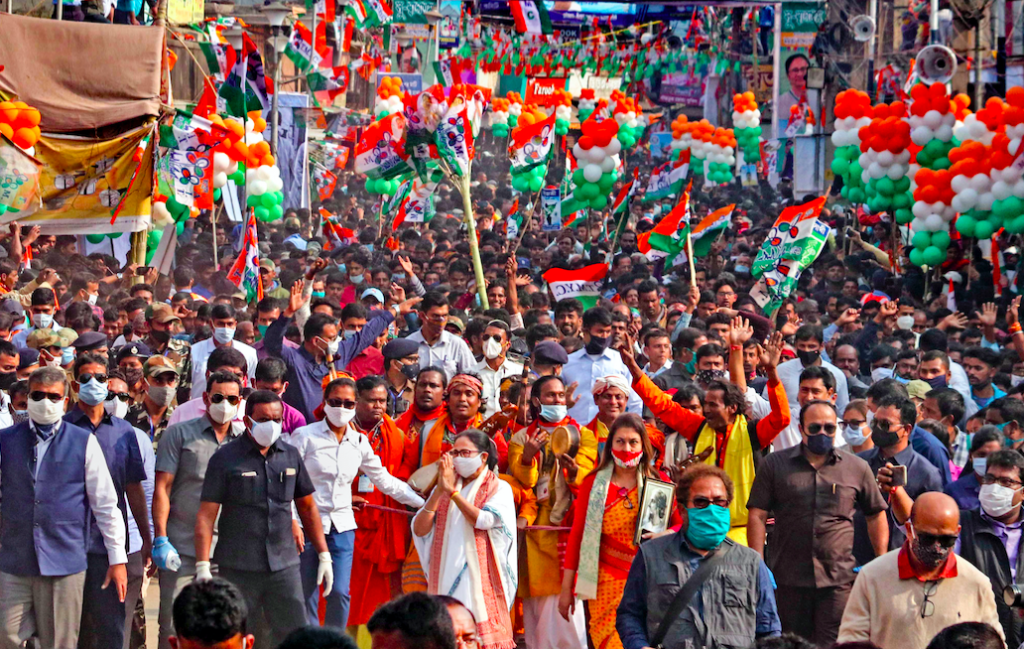 While Mamata’s Tuesday event was intended to be a show of political strength, the chief minister focused more on her ‘cultural’ superiority over her rivals.

“A party is importing narrow, discriminating and divisive politics in Bengal. We won’t let you do that,” she said.

“Those who don’t respect Mahatma Gandhi and other icons of the country are talking of building ‘sonar Bangla (golden Bengal). Tagore has already built sonar Bangla. We all need to protect it from the communal onslaught of outsiders,” she added, continuing a rhetoric she has stuck to, against the BJP.

Banerjee dedicated most of her 32-minute-long speech in invoking Bengali pride, proving an organic connect with icons from the state and attempting to show how BJP is respecting Tagore. It is interesting that she did not say ‘CPI(M)’ or ‘Congress’ even once in her speech.

The TMC supremo accused the saffron party of ‘buying TMC MLAs’ ahead of the state assembly elections slated in April next year. “They (BJP) are thinking that they can destroy Trinamool by buying some rotten MLAs. Our party’s strength is our grassroots and that can’t be eliminated. No use driving a nail into the rock. The nail will break,” she said.

Banerjee also brought the Citizenship Amendment Act (CAA) and National Register of Citizens (NRC) to the forefront and said, “Get yourself registered in the voter’s list. I will take care of the rest. Not a single person will go anywhere, this is your land.”

The BJP, which championed the contentious CAA and NRC, is currently downplaying the implementation of CAA and has virtually dropped the NRC five months ahead of the crucial assembly elections.

While interacting with the media, after the completion of his two-day visit in Bengal, Shah said: “Rules for CAA are yet to be framed. Because of COVID-19, the exercise on CAA cannot take place. When the vaccination process starts and we manage to break the cycle of the coronavirus, we will think about it.”

Interestingly, ‘Amar Sonar Bangla’ written by Tagore, which is also the national anthem of Bangladesh, was playing while Banerjee was marching with Tagore’s portrait.