In Fielding Terror-Tainted Pragya Thakur, What Message is the BJP Sending?

The saffron party's move is a part of a concerted electoral tactic that is premised on riling up majoritarian sentiments against other communities. 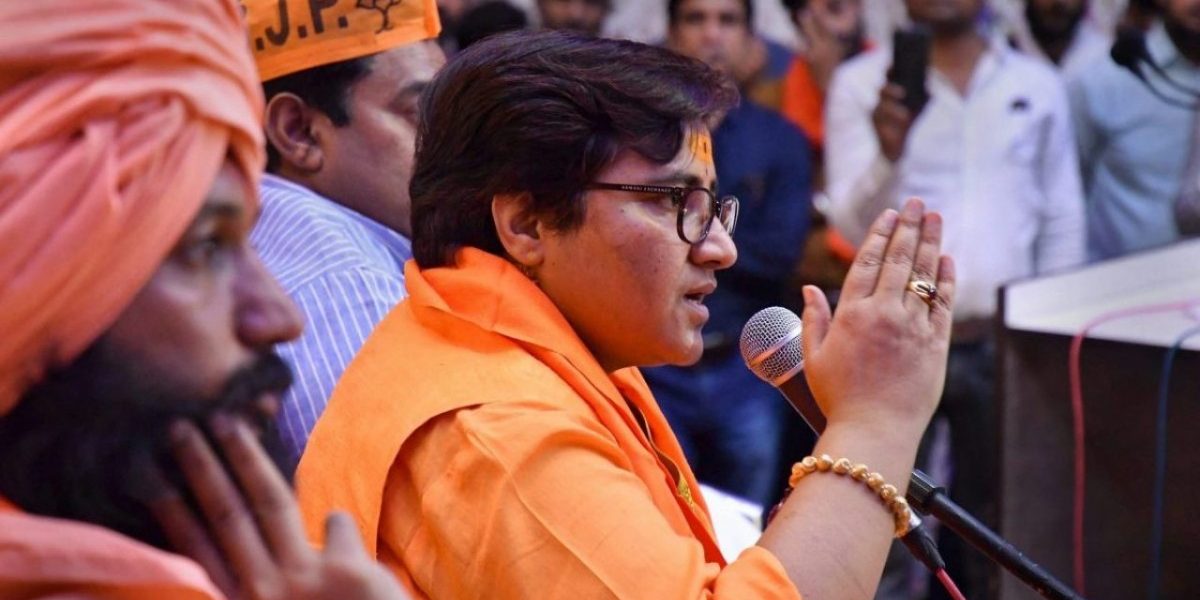 The 2019 Lok Sabha election campaign has set many alarming precedents. Fielding a candidate accused of terrorism is the latest one among them.

After turning Hindu majoritarianism into a key poll plank, the Bharatiya Janata Party (BJP) fielded Pragya Singh Thakur, an accused in the 2008 Malegaon blast, as its nominee from the Bhopal Lok Sabha constituency in Madhya Pradesh. Thakur, facing trial under the draconian Unlawful Activities Prevention Act (UAPA), is currently out on bail. She has been pitted against Congress leader Digvijaya Singh, who has, on several occasions, accused the Rashtriya Swayamsevak Sangh (RSS) of promoting “Sanghi terror.”

On September 29, 2008, a bomb went off near a mosque in Malegaon, Maharashtra, killing six people and injuring dozens of others. Maharashtra’s Anti-Terrorism Squad (ATS) labelled Thakur one of the “principal conspirators” in the violence. Arrested in 2008, she spent nine years in jail. In 2015, a year after Narendra Modi became prime minister, the National Investigation Agency (NIA) changed tack and sought to drop the charges against her. However, the trial court refused to go along with the agency’s decision on the grounds that Thakur’s motorcycle was used in the blast.

Much like the Samjhauta Express blast case (which killed 68 people, of whom 43 were Pakistani citizens), the Malegaon case is marked by suspicious twists and turns gesturing towards institutional and political complicity. Nearly four years ago, Rohini Salian, a senior law officer and the special public prosecutor in the Malegaon case, made a public statement alleging that the Modi government was putting pressure on her to “go soft” on the case.

This is the first time a mainstream political party – that too a party ruling at the Centre – has fielded a candidate implicated in a terror case.

It may be argued that Indian politics is no stranger to fielding candidates implicated in incidents of violence, many of whom later go on to become legislators. We are well aware that political parties of all ideological stripes field candidates suspected of having a hand in riots, communal killings and various other acts of violence, which are collective as well as individualistic in nature.

In fact, these tainted candidates are picked as nominees for the very reasons that make them criminals in the eyes of the law.

It’s this very legacy of violence they carry that endears them to the party leadership and adds to their winning potential. The systemic perversion and popular acceptance of such candidates is a comment on the state of the political system, on those who preside over it as well as those who help them to get them to this position of supremacy. Pragya Singh Thakur’s candidacy is born out of this murky lineage.

It would be facile to compare and measure the degree of heinousness involved in riots or acts of terror. It would be cynical – even perverse – to ask which kind of violence is more heinous than others, which perpetrators are guiltier, which victims more traumatised, more deserving of justice. Yet, these are questions that have assumed urgency in the absence of political morality.

Moreover, the BJP has chosen to field a terror-tainted candidate at a time when the party is running a shrill campaign on the issue of national security. In fact, if there’s any dominant theme noticeable in the BJP’s campaign, it’s the prime minister’s repeated projection of himself and his party as the only guarantors of India’s national security. The contradictions underlining the BJP’s strident anti-terror campaign and the party’s deliberate move to field Thakur, who is herself implicated in an act of terror, are too glaring to ignore.

On the other hand, it may be argued that Thakur’s candidacy and BJP’s campaign around majoritarian nationalism are a chip off the same block. Throughout the Lok Sabha campaign so far, BJP leaders have played upon the “hurt Hindu” sentiment and tried to turn that sentiment into resentment and anger against Muslims. The poll narrative scripted by the BJP has been dominated by a “saint” and a “villain” situated at two ends of the political and ideological spectrum, each seeming to stand in for two religious communities. It’s necessary to locate Thakur’s candidacy within this larger BJP/RSS narrative to understand its implications.

Pragya Singh Thakur’s candidacy also comes on the heels of last month’s acquittal of Swami Aseemanand and three others in the Samjhauta train blast case. Significantly, Jagdeep Singh, the special judge presiding in the case, said he was constrained to acquit the accused in the face of the NIA’s failure to furnish the best evidence.

Also read: Samjhauta Express Bombing: With a Prosecutor Like the NIA, Who Needs Defence?

Those defending Thakur’s candidature invoke the “innocent till proven guilty” principle to buttress their argument. But the question is: how would the BJP respond if a mainstream opposition party chose to field rights activists, charged under UAPA in the Elgar Parishad case, even if they manage to get bail?

Consider for instance what Narendra Modi said at an election rally in Korba, in Chhattisgarh, earlier this week. Pointing fingers at the Congress-ruled state government for the suspected attack by Maoists which led to the killing of BJP legislator Bheema Mandavi and four others on April 9, the prime minister asked: “Question is why did the attack happen?” Accusing the Congress of encouraging Maoists who want to split the country, Modi went on: “Does the Congress ‘hand’ favour development or destruction?”

A report in the Indian Express draws attention to the statement of Yashpal Bandana, an RSS member, who claimed to have attended two meetings in Bhopal on April 11, 2008, where the Malegaon blast was planned. Among others attending the meeting were Col Purohit and Pragya Thakur. Quoting from Bandana’s statement on the second meeting, the Express report says:

“Col Purohit said that we must do something quickly to take revenge against Muslims… In Maharashtra’s Malegaon the population of Muslims is very high. If we explode bombs there then we can avenge the atrocities against Hindus. On this, Sadhvi Pragya Singh said that she would arrange for men for the work.”

Some may even argue that if Kanhaiya Kumar, charged with sedition, can contest an election, why can’t Pragya Thakur? The charges levelled against Thakur and those against Kanhaiya are hardly comparable in terms of content and gravity. Kanhaiya, then JNU students’ union president, has been accused of raising slogans threatening to “break” India. The authenticity of the video purportedly showing Kanhaiya raising such seditious slogans, is in serious question.

In April 2016, the Delhi government lodged a criminal case in the Patiala house court against two Hindi channels and one English channel, charging them with telecasting doctored videos. Besides, the Delhi government is yet to give its sanction to the police to prosecute Kanhaiya, currently contesting from the Communist Party of India (CPI) in Bihar’s Begusarai constituency. Moreover, the frequency with which the present dispensation has started slapping sedition charges on more and more people, particularly dissidents of all hues, has stripped the charge of the gravity it was originally meant to carry.

Also read: Kanhaiya Kumar: This Election is About the Struggles of Past and Our Hopes of the Future

Then there is the issue of Thakur’s torture in jail. The use of torture on prisoners has to be condemned in no uncertain terms and without exception. And Thakur’s imprisonment under a law such as the UAPA must also be wholeheartedly condemned. However, we are all too selective in our condemnation of what happens to people in prisons. To cite just one example, take the case of Soni Sori, arrested on the charge of working as an intermediary for the Maoists. She was sexually assaulted in jail in 2011. A Supreme Court inquiry confirmed the sexual assault in jail. What fallout befell her torturers?

Or take the case of professor G.N. Saibaba, undergoing life imprisonment in Nagpur central prison after his conviction under the UAPA as a Maoist in 2017. Formerly a professor of English at Delhi University, Saibaba is bound to a wheelchair due to post-polio paralysis. Suffering from severe ailments, Saibaba’s medical condition has worsened in jail. The Nagpur bench of Bombay high court last month rejected a petition seeking suspension of life imprisonment and bail on medical grounds under section 389 of Code of Criminal Procedure. We need scarcely make mention of Binayak Sen too in this context.

So where does this leave us? Arguably, by fielding Sadhvi Pragya, the BJP is sending a very clear message that it does not consider some acts of violence to be terrorism if those acts are committed by members of the Hindu community. One hardly needs much imagination to speculate about what would happen if a political party fielded, say, a Muslim person accused of terrorism as a candidate in a general election.

Beyond the pale of whataboutery, we have to understand this move by the BJP not as an isolated incident of putting up a controversial candidate for a prestigious seat, but as part of a concerted electoral tactic that is premised on riling up majoritarian sentiments against other communities.