If the students’ movement is to become something of a moral dividend for India, it must remain scrupulously non-violent, in thought, word and deed. 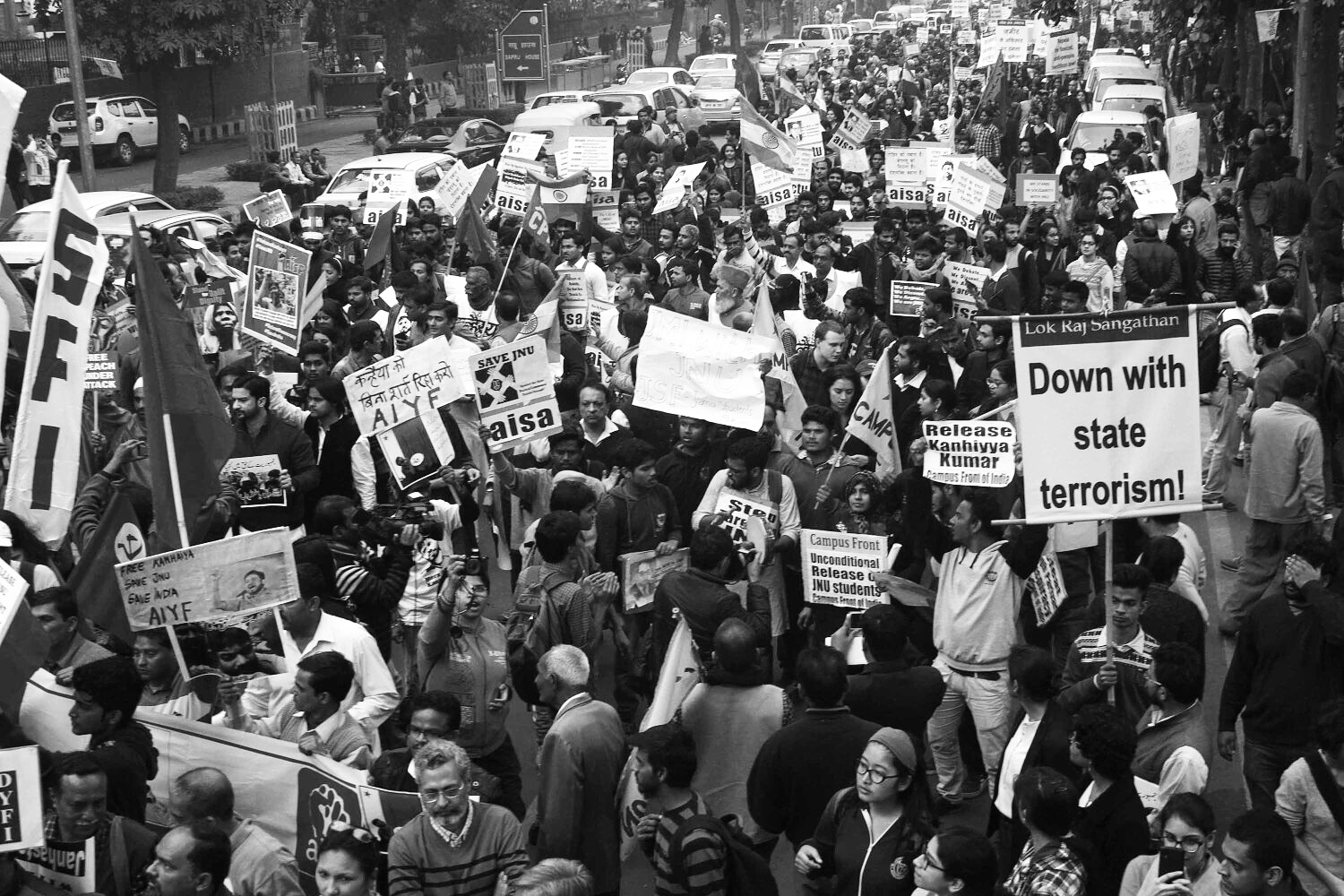 A view of a protest in defence JNU students. Credit: Shome Basu

There can be no doubt that what we are witnessing in the country is the rise of a students’ movement. From Hyderabad to Delhi, they are astir.

How far will it go? Does it have the potential to become a movement of the kind Jayaprakash Narayan catalysed in the mid-1970s?

Time will tell, but this we can be certain of – Rohith Vemula’s note, written just before he withdrew from life, and Kanhaiya Kumar’s speech, delivered just before he was withdrawn from freedom, are thus far the two greatest testaments of 21st century India. They have been made out of the razor’s edge of truth. They will last for all time.

Sedition by any meaning of that word must involve a practice of, or an incitement to violence, strife, revolt, rebellion or mutiny. Our colonial masters found it convenient to club dissent, free thought, free speech and the desire for swaraj, under the red umbrella of sedition, and through Section 124A of the IPC, try Indian freedom fighters, such as Gandhi and Bhagat Singh, for sedition. But what of our own democratic masters?

Despite Jawaharlal Nehru’s expressly stated opposition to keeping that section alive in the IPC it has not been removed. Why? Power, shakti, is insecure and nervous. There was a time when victory or defeat at elections was taken as a democratic experience. Now it is taken as a matter of life and death. Not everybody is an EMS Namboodiripad or a K Kamaraj. So when the basic falsehoods of a regime, a system or an order are challenged, what is the reaction? Sedition is invoked and one’s patriotism is questioned. Our parliament must now drastically amend, if not end this outdated, outmoded and outrageous provision.

One’s patriotism cannot be questioned any more than one’s loyalty to their parents or teachers can be questioned. Bal Gangadhar Tilak said ‘Swaraj is my birth right’. Let us say to sedition-mongers that Mother India is not your proprietary right. See Abanindranath Tagore’s great painting of Bharat Mata to see what she is. She is not a litigious, insecure, intolerant keeper of jails. Watch Mehboob Khan’s film ‘Mother India’ to see what the mother Radha is about. That is Mother India – alive to her daughters, her un-empowered, her minorities, her destitute OBCs, her Dalits, her tribals and, yes, her elderly, differently abled and orientated children, her prisoners and her undertrials. Do not convert that oceanic Mother India into a political totem. Do not try to appropriate her. Do not try to insinuate the brute spirit of a Reich-like fatherland into our motherland.

JNU is being called a haven of seditionists. At one level, JNU should take that as an acknowledgment of its role as a catalyst of independent thinking. But at another level, and a very important one at that, this development is a matter of grave concern to our future as a democracy and a republic. The dubbing of free thought as anti-national, of dissent as un-patriotic and of outrage as violence is a coin of which the other side upholds jingoism as nationalism, chauvinism as patriotism and extols hatred of perceived enemies, within and outside our borders, as a dharma. The humanistic and political legatees of Tagore, Gandhi, Nehru, Periyar and Ambedkar must also see that right from the assassination of Gandhi down to the murders in recent months of Narendra Dabholkar, Govind Pansare and MM Kalburgi, the lynching at Dadri and the mob-fury at JNU and Patiala House, there is a clear and unmistakable pattern of intolerance that believes in physical extermination.

It is important that liberals become radical about their liberalism and radicals become liberal about their radicalism. What does this mean? It means, simply this: the time has come for liberals and radicals in the cause of India’s democratic culture to close their ranks and confront the totalitarian, authoritarian, majoritarian behemoth as one. We, the people and voters of India, must not be asked to make subordinate choices, within the larger choice between the communal right and social democrats. And after the coming assembly elections are over and done with,  the Congress, the Left and all social democrats in the states must together realise that their state-level scrimmages apart, the bigger and greater challenge is that posed by the  forces of bigotry in India, Hindu and Muslim, backed by political and corporate opportunism.

I will conclude with one thought for the consideration of the protesting students. Their protest may either fizzle out or become something of a moral dividend for the nation. If it is to be the latter, it must remain scrupulously non-violent, in thought, word and deed.  They must remember that if the students movement that Narayan led in the mid-1970s had a nation-wide impact, it was not because it threatened the nation’s political system with violence but because it challenged wrongdoing, corruption being the foremost of those, with a moral voltage.

Gopalkrishna Gandhi, a former Governor of West Bengal and a former high commissioner to Sri Lanka, is now Distinguished Professor in History and Politics, Ashoka University.