In Chhattisgarh's Kardana, Biometric Failures Are Depriving Old Villagers of Their Pension

The government is not releasing pensions for people who have failed to submit their Aadhaar number to the bank. This is not only a violation of Supreme Court orders but also an infringement of the fundamental right to life. 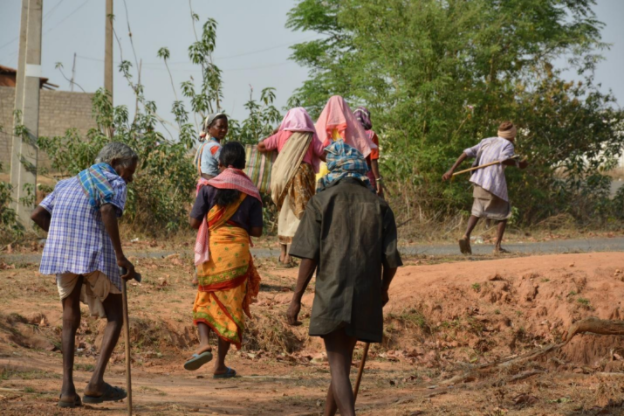 Kardana village is situated in Batauli block of Surguja district in Chhattisgarh – about 12 km from Batauli and 60 km from the district headquarters in Ambikapur. It is surrounded by hills and inhabited by Adivasis, including particularly vulnerable tribal groups (PVTGs). The village has 946 residents, of which 195 are widowed or elderly pensioners.

There are no bank branches in Kardana nor does it have mobile connectivity. The nearest connectivity spot is in Chiranga, about 9 km away across the hill.

Pensions in Kardana used to originally be paid in cash and later through post-office accounts. More recently, pension payments were shifted from post offices to banks. Pensioners were told to open accounts with the Union Bank of India (UBI), which has only one branch in the district, far away from Kardana, in Ambikapur.

Pension payments have also gone through many technological changes. The latest development is the introduction of biometric point-of-sale (PoS) machines, handled by bank mitras, also known as business correspondents, in places where there are no banks. The PoS machine requires connectivity and since there is none in Kardana, UBI has appointed a bank mitra in Chiranga.

The system works as follows. Pensions are paid into the recipients’ accounts. Meanwhile, the bank mitra authenticates the recipients by verifying their fingerprints against the Aadhaar database over the internet using the PoS machine and gives them a receipt. He then collects the aggregate pension amounts of the authenticated pensioners from the bank in Ambikapur and distributes them to those who have authentication receipts. In other words, the bank mitra acts as a proxy for the authenticated pensioners when he goes to the bank. But what if there is no connectivity when the pensioners come to Chiranga, or if the machine does not recognise someone’s fingerprints?

These hurdles have affected many villages in Chhattisgarh. Kardana pensioners, many of whom walk with great difficulty, have had to trek 9 km down the hill to Chiranga to collect their meagre pensions. Even when they manage to reach, it often happens that the PoS machine refuses to recognise their fingerprints, forcing them to walk back in vain. They live, literally, at the mercy of the PoS machine. In Kardana village alone, seven persons have stopped getting their pension since biometric authentication was introduced.

Before biometrics were introduced, cash payment of pensions through gram panchayats was replaced with post-office payments to avoid rent-seeking behaviour. The post office turned out to be short of staff for this purpose, so banks took charge. The bank mitra system, however, is also vulnerable to corruption. Many pensioners are not clear about the amount they are supposed to receive. With payments often kept pending for two or three months, they are unable to keep track, all the more so as they get flimsy receipts that become illegible within a few weeks as the ink vanishes. In the absence of any bank branch nearby, they are unable to get their passbooks updated. In this confusion, many villagers claim that the bank mitra often cheats the pensioners. The PoS machine is no protection against this sort of fraud.

Going to the bank in Ambikapur is very difficult for old people in Kardana (the nearest bus stop is in Batauli). Travelling to Ambikapur would also cost them half of their monthly pension. In any case, bank employees often refuse to print passbook entries on the pretext that ‘the machine is not working’. There again, pensioners are often victims of the tyranny of the machine!

The use of Aadhaar in welfare schemes has been a contentious issue lately. The government’s desperate attempt to link numerous facilities with Aadhaar has put many people in a difficult situation. Even if they have an Aadhaar number, correctly seeded in the relevant database, they are vulnerable to biometric failures. The locus of authority, which is supposed to lie with the people in a democracy, seems to be shifting to inanimate machines. It also emerged, in a recent discussion with government officials, that pensions are not being released for people who have failed to submit their Aadhaar number to the bank. This is not only a violation of Supreme Court orders on Aadhaar but also an infringement of the fundamental right to life inherent in Article 21 of the constitution.

Of the seven persons in Kardana who stopped getting their pension because of biometric failures, one (Devnath) died waiting for his pension. The causes of biometric failure may be many, from old people having rough hands to technical glitches with the PoS machine. But there is an injustice being done by denying the needy their pensions. Unfortunately, this is not getting enough attention in the din of the Aadhaar debate.