In Bengal's CPI(M)-Congress Pact, an Understanding Emerges of Who the 'Principal Enemy' Is

Communists believe that despite sharing a troubled history with the Congress, they have no option but to join hands in the 2021 assembly elections to prevent its eroding political significance. 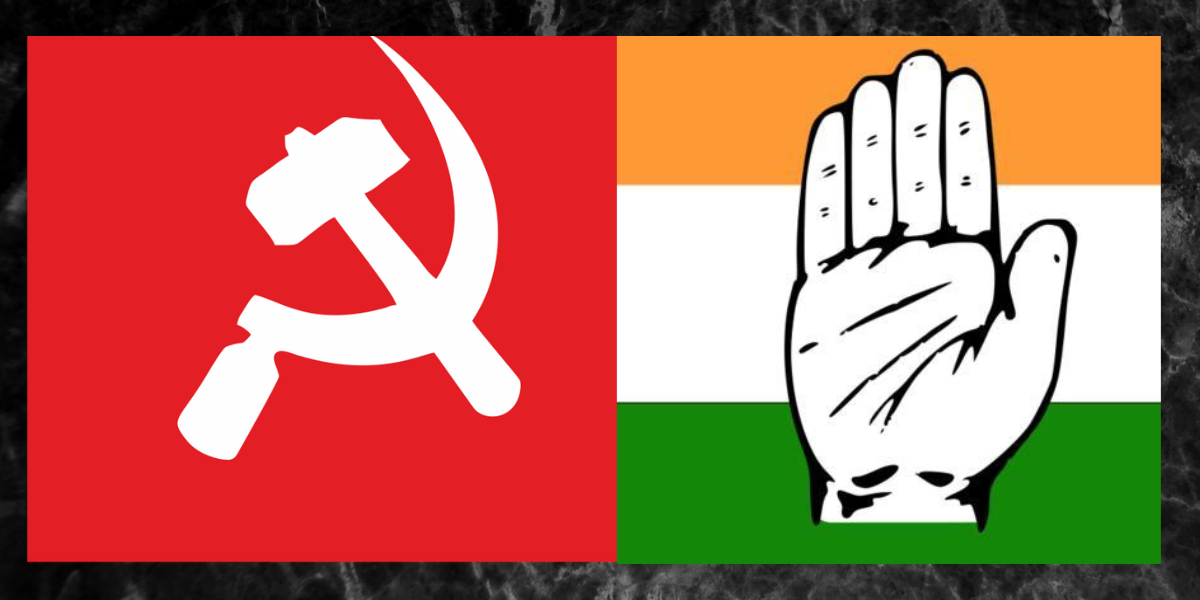 Despite the fact that the idea of forming an alliance has been around since 2016, a lot has to be done to make CPI(M) and Congress workers to work together at the ground level. Photo: Wikimedia Commons

The newly-hatched entente between the Communist Party of India (Marxist)-led Left Front and the Congress in West Bengal is an alternative that has been launched to fight against the incumbent Trinamool Congress and the challenger, the Bharatiya Janata Party (BJP) in the high stakes West Bengal assembly elections due by May 2021.

Within the CPI(M), it is being described as a “tactical” move for the crucial state elections, where the party once ruled for an uninterrupted 34 years.

It is a candid admission that the once formidable Marxists are an enfeebled force that cannot fight the 2021 elections in the intensely competitive and confrontational, often murderously confrontational, politics in West Bengal. Down to 26 seats after the 2016 elections, in the state assembly which has a total of 294 seats, the CPI(M) has its back to a tiny corner of the wall.

The defection of the party’s MLA from Basirhat in North 24 Parganas, Rafiqul Islam, last week to the Trinamool Congress is a measure of how vulnerable the CPI(M) has become since it lost power in 2011.

The party’s resuscitation efforts have only recently shown some response, with more people willing to take up the red flag and walk in a variety of protest rallies focusing on the Citizenship Amendment Act (CAA) and National Register of Citizens (NRC), farmers distress, mismanagement by the Narendra Modi government and the Mamata Banerjee government of the pandemic, unemployment and changes to the labour laws, rising food prices and local corruption.

After its 2011 defeat, the CPI(M) had been decimated by the “terror” unleashed by the Trinamool Congress, which resulted in local offices of the Marxist party shutting down and, in many places, being taken over by the ruling regime.

The partnership with the Congress is therefore a survival strategy for the CPI (M); party leaders acknowledge that the organisation is in no shape to take on the Trinamool Congress on the one hand and the BJP on the other. The CPI(M) needs a partner to bolster its position and withstand the pressure and the power of the ruling party in West Bengal as well as the BJP, which is positioned as the principal challenger and only alternative.

In West Bengal, where the BJP is using its majoritarian agenda to destabilise by breaking up the old political-social order of a compact to maintain communal harmony and build its appeal by branding all other political parties as appeasers of the Muslim minority, the selling point of the CPI(M)-Congress entente is a secular push to save the state and by extension the country and the Constitution from the religious rightwing capture of the Sangh Parivar.

A proverbial Hobson’s choice for CPI(M)

The CPI(M)-Congress entente has one other selling point; the enormity of the economic crisis that has revealed in stark detail the political and policy priorities of the Narendra Modi government at the Centre and also the unstoppable leakages of government resources into the hands of the Trinamool Congress local strongmen that mark the response of the Mamata Banerjee government in West Bengal. It implies that for the CPI(M), at this particular moment, the Congress is an associate that it needs to fight against the BJP. It is a tacit acknowledgment by the Marxist party that even though the Congress may not be a satisfactory partner, because its economic policies are ideologically anathema, and it has in the past done serious damage to democratic rights and institutions, at this particular moment, it is the only available associate.

The entente is, in reality, a signal that the CPI(M) is identifying the BJP as the “principal enemy” and that in order to fight against its majoritarian, communally divisive and authoritarian politics, which is incrementally destroying the secular fabric, communal harmony, democracy and wrecking the constitution by undermining the basic principles, it needs partners that can be relied upon to remain committed to fighting the BJP.

Papering over a troubled history

The CPI(M) and the Congress, in West Bengal, have a shared history of suspicion, hostility and a confrontation that has been violent, often murderously violent. The history of the confrontation has been vividly described in various accounts, including West Bengal’s former finance minister Ashok Mitra’s book, Hoodlum Years. The deepest levels of distrust and hostility of supporters from both parties against each other fester at the grassroots and this is an obstacle that will need to overcome for the partnership to present itself as a viable political choice for voters.

The decision that the coordination between the two parties will be operational from the booth level, with cadres-workers-local leaders from the two parties working together to organise and mobilise voters, build momentum through jointly organised protests on a slew of issues by the CPI(M) and the Congress, is as much a signal to wary voters, as it is to party workers.

Despite the baggage, the idea of a Congress-CPI(M) partnership to fight in elections in West Bengal has been around since the 2016 state assembly elections, when the first experiment turned into a fiasco for the Marxists and a windfall for the Congress.

In 2016, the CPI(M) won an all-time low of 26 seats and the Congress won 44 out of 294 seats in the assembly. The failed gamble intensified hard line resistance to the idea of partnership with the Congress within the CPI(M).

Even so, the Congress and the CPI(M), at the national level were keen on a seat sharing arrangement in West Bengal in the general elections in 2019. It fell through, but the idea of pooling forces went through a significant iteration when the Congress, in 2020, offered to transfer votes to the CPI(M), if the party nominated Sitaram Yechury for a Rajya Sabha seat from West Bengal. The CPI(M)’s politburo rejected the offer, but the idea of a partnership between the two parties did not die even after the snub.

An alliance in the making

CPI(M)’s 2021 West Bengal election plan is similar to the tactics it has embraced in Bihar. The Congress and the Communist Party of India (Marxist-Leninist) are part of the Rashtriya Janata Dal-led Mahagathbandhan (grand alliance) in the elections now underway. Given that the CPI(M) rejected a seat-sharing proposal in Bihar for the Lok Sabha elections in 2019, because it was squeamish about the politics and ideology of the Congress on the one hand and the RJD on the other, the West Bengal entente of the Congress and the CPI (M) takes the partnership another step forward.

The anti-BJP consolidation is proceeding one act at a time, in a drama that has multiple acts. Underpinning the election partnerships in Bihar and West Bengal is the fact that the trade unions and farmers organisations along with political parties have planned for a massive protest rally in New Delhi and the all India strike in November. The joint platforms of trade unions and farmer organisations opposing – the Industrial Relations Code Bill, 2020, the Code on Social Security, 2020 and the Occupational Health and Safety Bill, 2020 and the Farmers’ Produce Trade and Commerce (Promotion and Facilitation) Bill, the Farmers (Empowerment and Protection) Agreement on Price Assurance and Farm Services Bill, and the Essential Commodities Amendment Bill – include those that are affiliated to the Congress and the CPI(M).

These are pointers that the complex process of consolidation is a continuing exercise.

There is a high probability that the emerging alliance of the CPI(M) and the Congress would unsettle the Trinamool Congress because the combine could eat into its minority vote bank.

Having positioned itself as the only alternative, the BJP is banking on picking up most of the disgruntled voters from all other parties by projecting itself as an untested and so, untainted choice. The flaw in the BJP’s strategy is that as a brand-new option in West Bengal, its attraction could be offset if the popularity of the Narendra Modi government tanks in the next five months.

In formally setting themselves up as an alternative, the CPI(M)-Congress entente is taking upon itself a challenge that neither party can predict, with any degree of certainty, will work. There is no unreal expectation that the combination of forces will outdo the principal contenders for power in the state in the 2021 assembly election. The BJP and the Trinamool are the favourites and have more heft than the Congress and the CPI(M)-led Left Front.

Within the CPI(M) there are concerns that the mobilisation required of its organisation, which is no longer the well-oiled machine that it once was, could falter, especially in places where the “terror” that is murderous confrontations by the Trinamool Congress has driven party workers to seek safety by either joining the ruling party or attaching themselves to the emerging BJP. The next five months will be testing times for the CPI(M), to revive its organisation at the grassroots and rebuild from scratch in many places.

CPI(M) leaders are concerned that the BJP-RSS strategy will leverage the CAA-NRC to trigger Hindu sentiment in a state that has deep-rooted anxieties about the Muslim minority and partition. There are concerns that the Centre will play the jihadi card by timing the unearthing of more Al Qaeda cells in the Muslim majority district of Murshidabad or other districts where the Muslim population is between 20 to 40%.

The CPI(M)’s partnership with the Congress for the 2021 assembly elections is at best a plan that works as a spoiler. The flaw in the plan is that the entente has two targets, namely the Trinamool Congress and the BJP instead of just one.

Over the next five months, the two partners will have to work on working together and wooing back voters who had switched loyalties as well as convince uncertain voters not to switch sides. The success of the plan depends heavily on how the booth-level leadership of the CPI(M) and the Congress handle this complicated politics.