In Murshidabad Murders, a Chance for BJP to Slam TMC, Tug at Communal Heartstrings

BJP has been loud in its claim that one of the victims is an RSS member even in the face of the police's insistence that there is no evidence to link his political affiliation to the murder. 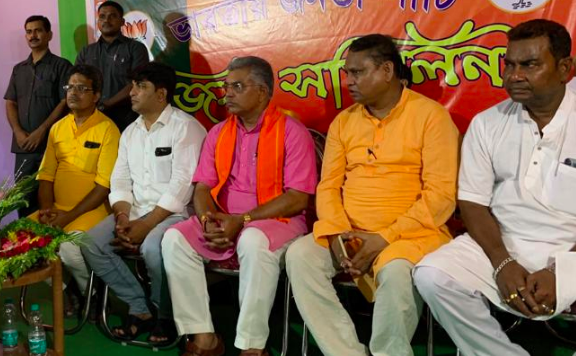 New Delhi: The tragic murder of a 35-year-old primary school teacher and his family has set off a political battle in West Bengal, with the fledgling Bharatiya Janata Party choosing to corner the Trinamool Congress government on the incident.

Bondhu Gopal Pal, his wife and eight-year-old son were found to have been murdered at their residence on Wednesday in Jiaganj area of Murshidabad district.

Since then, the Sangh parivar has hyped the incident of triple murder as a case of political violence. According to ANI, Rashtriya Swayamsevak Sangh’s Bengal secretary Jishnu Basu said that Pal was “also an RSS [cadre] and was recently associated with a ‘weekly milan’.”

He said that a fact-finding team of the RSS visited Jiaganj and that the police had assured him of quick action.

He held the state government responsible for “a poor law and order situation” in the state.

West Bengal: A teacher, his wife and child were murdered by unidentified miscreants in West Bengal’s Murshidabad district yesterday. As per RSS West Bengal secretary Jishnu Basu, he was also an RSS worker and was recently associated with a ‘weekly milan’.

The Sangh parivar advanced its campaign despite the fact that the district police categorically said on Wednesday that the murders were committed by “unidentified miscreants” and it was difficult to confirm the facts about the case at this stage.

PTI quoted a police official saying that police recovered the bodies lying in a pool of blood from their residence.

The official said that Pal’s neighbours informed police after they found his family absent in the Dussehra celebrations. “After locals did not see them at the puja pandal on Vijayadashami, they visited their Pal house, only to find the door bolted from inside,” the official said.

Yet the Sangh parivar remains unrelenting in its efforts to run an organised campaign to attack the state government.

At the national level, BJP’s national spokesperson Sambit Patra hit out at “liberals” and eminent citizens who recently wrote a letter to prime minister Narendra Modi, requesting him to take action against incidents of communal lynchings.

“Warning:Gruesome video. This has shaken my conscience …a RSS worker Sh Bandhu Prakash Pal,his eight months pregnant wife & his kid were brutally slaughtered in West Bengal’s Murshidabad; Not a word by the liberals; Not a letter by 59 liberals to Mamata. Nauseating Selectivism,” he wrote while posting a video featuring the dead bodies of the three victims,” Patra tweeted.

The Wire has chosen not to share the video here because of its gory content and sensitive nature.

West Bengal governor Jagdeep Dhankar also reacted to the murder and in doing so, contributed to the Sangh parivar’s political agenda. “I am in deep pain. My heart is bleeding. What was in Murshidabad, a brutal murder took place, putting humanity to shame. A teacher, his pregnant wife and eight-year-old child were killed in a barbaric manner and there has been no response from the state machinery so far. This is a very, very serious reflection of the situation we are living in. I would urge the authority for a quick and real investigation,” he said.

Also read: Trinamool Must Check Its Own Intolerance to Counter the Rise of BJP in Bengal

The RSS mouthpiece Organiser has also attacked the state government for “deteriorating law and order” and questioned liberals for allegedly remaining mute. It also demanded a CBI investigation in the case.

However, Tanmoy Sarkar, additional superintendent of police of Murshidabad, told the press on Thursday that it appeared that the murderers may have known Pal and his family from earlier.

“We have inspected the scene of the crime and it appears that the perpetrators of the crime were known to the victim as there was little or no resistance,” Sarkar said. He said that it was also possible that the victims were poisoned before being attacked.

He also said that the police have recovered a note, written possibly by Pal’s wife, which suggested that Pal may have landed himself in a financial dispute. “Pal and his family stayed in Sagardighi area of Murshidabad around one and a half years ago. He shifted to Jiaganj after he borrowed some money from people and got into some trouble over it,” Sarkar said, adding that Pal had also ventured into a few small businesses, along with taking up teaching.

He said there were no indications to suggest that the murders were political in nature. He added that it would be premature to say anything convincing about the motive behind the murders as the investigation is still in a primary stage. Urging people not to spread misinformation, he said that evidence collected from the crime scene is still being investigated.

Despite this uncertainty, top BJP leaders like Sambit Patra and party supporters have attempted to turn the incident into a case of political violence. BJP’s Bengal unit president Dilip Ghosh too visited Jiaganj on Thursday.

Only the Murshidabad (South) BJP vice president Humayun Kabir distanced himself from the party’s campaign. He said Pal was indeed an RSS member but insisted that his political identity had no connection with the murder.

The saffron party’s campaign has come at a time when it has just ended its outreach programme in Bengal. It had asked its leaders and cadres to reach out to as many people as possible during the five-day long Durga Puja and spread the party’s ideology and policies.

India Today reported that “the saffron party this time had set up more than 10,000 stalls outside puja pandals to display books on its ideology” and on making people aware of the National Register of Citizens and the Citizenship Amendment Bill.

Political violence is a common phenomenon in the state. However, unlike this case of triple murder, most of these incidents play out in the open.

For instance, a 38- year-old BJP worker was shot at the South 24 Parganas on Thursday. Sheikh Farid and Raju Kurmi, both TMC leaders, were also attacked fired at in the North 24 Parganas. Kurmi died as a result while Farid is critically injured.

A similar incident was also reported in East Midnapore district where a TMC leader, Kurban Sheikh, was killed.