In Aurangabad, Dalits, Muslims and other communities who faced communal violence united to buck the national trend.

Aurangabad: Anyone visiting Aurangabad can sense the brewing emergency in the air. In late April, in the thick of the election, a video surfaced of a teenager – seemingly a Muslim – who abused prominent personalities of Maharashtra. Rival parties alleged that the video was being distributed by the All India Majlis-E-Ittehadul Muslimeen (AIMIM), a newcomer to the city’s politics.

Harshvardhan Jadhav, an independent candidate who was formerly with the Shiv Sena, responded with his own video, demanding an apology from the AIMIM and threatening to ransack its offices. Jadhav is also the son-in-law of the state BJP president, Raosaheb Danve.

Imtiaz Jaleel, the AIMIM’s candidate, shared another video in response, which helped calm the situation. In the video, Jaleel, while appealing for peace, denied all allegations against the AIMIM and urged the police to take strict action against those trying to instigate violence in the city. Jadhav was forced to share another video taking back his threat and apologising to the city police. This timely and sensible intervention both by the police and Imtiaz Jaleel, who represents the alliance of Vanchit Bahujan Aghadi (VBA) and AIMIM from the Aurangabad constituency, saved the city from another bout of violence.

Also Read: Why a Former Journalist’s Electoral Victory in Aurangabad Is So Significant

During the campaign, the city witnessed a new solidarity, especially between Muslims and Dalit-Bahujans of the city, regularly on display at the party office of MIM at Buddi Lane near Jama Masjid in the old part of the city. In my conversations with supporters of Imtiaz Jaleel, everyone was enthusiastic about the cross-community alliance – and its potential as a watershed moment for the growth of and peace in Aurangabad in the coming years.

With a Muslim population of about 31% and Schedule Caste population of 15.7%, Aurangabad, in the heartland of Marathwada, is a hotbed of communal polarisation. Incessant violence since the 1980s, and the militant politics of the Shiv Sena resulted in a deep segregation of the city on religious and caste lines. The demand to rename Aurangabad as Sambhaji Nagar has created a more recent spectacle of Hindutva power-politics.

In January 2018, the city was hit by violence after the Bhima-Koregaon clashes. That May, again, two people died and many shops and properties were destroyed in communal violence.

The city seems on the edge of descending into a curfew-like situation. Even on the day of the Lok Sabha election results, offices and shops closed early as rumors of possible violence spread.

Urban local body elections in Aurangabad are essential for control over the city. The first corporation elections in 1988 turned the city into a battleground, and many people died. In 1985, just three years before the elections, the Shiv Sena had inaugurated the party’s city branch. There was full-scale rioting during the municipal elections in 1988 because of the Sena’s anti-Muslim politics. It won 27 of the 60 seats in the first municipal corporation elections of the city. Since then, it has been the main contender. Its dominance has led to deep-fissures in the city’s social fabric.

From the late 1980s, the Shiv Sena would dominate the parliamentary constituency; Chandrakant Khaire held his seat from 1999 to 2014. 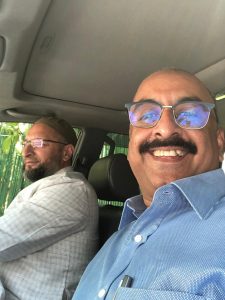 In 2015, AIMIM made its debut in civic body polls. It won 25 of the 113 seats, and emerged as the second-largest party, after the Sena-BJP alliance. In the 2014 Maharashtra assembly elections, the AIMIM’s Imtiaz Jaleel won the Aurangabad Central seat. In later municipal elections, the party worked to consolidate Dalit, Muslim and OBC votes. It has worked in its favor, presenting a secular and accommodative image on the ground.

After last year’s Bhima-Koregaon attacks, many Dalit voters moved away from the Shiv Sena. Four-term MP Chandrakant Khaire lost the citizens’ confidence more generally. His interference in the municipal corporation and zilla parishad had alienated residents, and the city’s garbage and water crisis had become his signature failures. This also contributed to Harshvardhan Jadhav’s split from the Sena-BJP alliance. As a result, this election was a battle between two pro-Hindutva candidates, Jadhav and Khaire. This allowed the MIM-VBA candidate to win by a margin of just 4,492 votes over Khaire.

Post-1980, incessant violence in cities like Mumbai, Ahmedabad and Aurangabad has forced Muslims into geographic areas where they are cut-off from the mainstream. This spatial division has made Muslim spaces more vulnerable to violence, and irrelevant and invisible to the larger electoral and cultural politics of the nation.

Also Read: In Maharashtra, Congress Proved to be Its Own Enemy

Since the communal violence of 1988 in Aurangabad, the city has become more segregated everyday due to the capture of the political stage by Hindutva parties. In the absence of a progressive politics to bridge the gaps between the communities, ties could not be rebuilt.

In 2019, however, a new assertion – bringing together Dalits, Muslims and other communities who faced the worst of the violence these last three decades – offered a glimpse of a new politics, and of a city turning from hate and toward assimilation and peace.

Asaf Ali Lone is an independent researcher. His research interests are urban segregation, marginalities and resistances.