Though the BJP is touting that there is no alternative to the Modi team in 2019, India's political history proves that the TINA factor should never be upheld as a foregone conclusion when it comes to poll results. 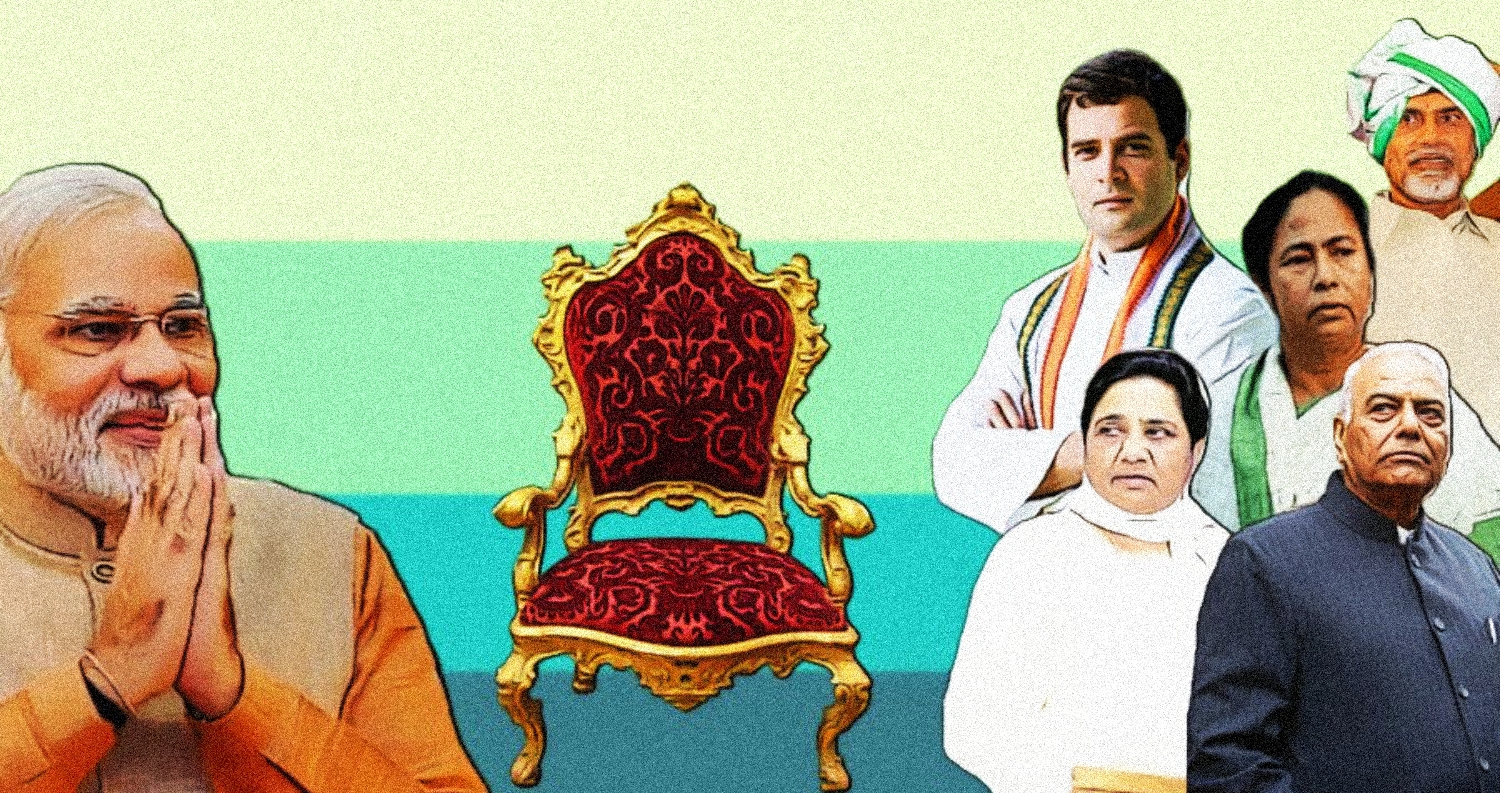 Even among political analysts who believe that the performance of the Narendra Modi government has been unsatisfactory, few seem to believe the Bharatiya Janata Party won’t return to power. The anti-incumbency factor against this government won’t crystallise, they argue, in the absence of an alternative leader who can match the national popularity and stature of the prime minister.

The BJP, of course, has made the ‘there is no alternative’ or TINA factor a central poll plank, contrasting the fragmented, contradictory nature of the incipient opposition alliance with the strong, unified leadership under Modi.

Maharashtra chief minister Devendra Fadnavis in April echoed this mantra. “The people know the contradictions of the opposition. They want only power… but they have no alternative to the leadership of PM Modi,” he claimed.

However, this is merely the latest iteration of the elusive TINA factor being held out as the decisive factor in a national election, evidence to the contrary be damned.

In February 1988, India Today commissioned a comprehensive opinion poll on the upcoming general election. Analysed by Prannoy Roy, then more known for his role as a psephologist, the results were succinctly put.

“The message of the poll is simple and direct: because of a fragmented opposition, There Is No Alternative (TINA) to Prime Minister Rajiv Gandhi and the Congress(I),” the survey claimed.

The findings exuded certainty in the conviction that this TINA factor, and not actual issues, was ultimately going to be the decisive variable.

“No matter how much of a battering Rajiv Gandhi may seem to have taken – from Bofors, Fairfax, growing economic problems, and persistent headaches like Sri Lanka and Punjab – he and the Congress(I) remain the country’s first choice in an election.”

In little over a year after this poll, however, the Congress suffered an ignominious defeat, losing over half of its seats. It turned out that a loose, hurriedly cobbled anti-Congress coalition cutting across ideological divides was indeed a viable alternative against a government that had demonstrably failed to deliver on its promises. Rajiv Gandhi had raised expectations by promising economic modernisation, institutional reforms and political devolution, but squandered his vast political capital in blunders and scandals, achieving little. He was, therefore, suitably punished.

The 1989 results underlined the message that in our parliamentary democracy, elections were less a presidential contest between two leaders and more a combination of local factors and a referendum on the performance of the government, relative to their promises.

Despite this hard lesson, analysts glibly brandished the spectre of TINA again in 2004. Writing just ahead of the elections, Prabhu Chawla wrote:

“Naidu’s casual remark that it is going to be Vajpayee vs Question Mark may well turn out to be the only issue for the 650 million voters for sending 542 members to the next Lok Sabha.“

Like almost all pollsters and media personalities of the time, Chawla considered the results of the elections to be a foregone conclusion, hailing Vajpayee as both “the leader and the slogan” of the ruling NDA.

No one predicted an upset in 2004 because no one could foresee how a party led by such a popular prime minister – to whom recurring surveys gave a huge lead in popularity ratings against all his rivals – could be defeated by a party led by a relatively inexperienced politician weighed down by the controversy over her ‘foreign origins’.

The relentless viciousness of the ‘foreign origin’ campaign unleashed against Sonia Gandhi makes the present ‘Pappu’ campaign run against her son seem mild in comparison. Many analysts believed that this ‘foreign’ label attached to Sonia Gandhi might dent the Congress’s chances while Vajpayee was unanimously considered to be more popular than this party. The BJP had just romped home in three states, leading them to call for early elections, with anti-incumbency seemingly nowhere in sight.

As it happened, against all odds and predictions, the loosely tailored coalition that became the UPA prevailed over the BJP-led NDA simply because its constituents ran an issue-based campaign that exploited the inherent vulnerabilities in the BJP’s platform. In rally after rally, the Congress attacked the government for catering to the elite and urban classes, and highlighted its failures on various fronts, particularly rural issues, poverty and unemployment. The “India Shining” and other “feel good” bubbles were just waiting to be burst, as the fruits of economic growth had left untouched the vast majority of the population, with these campaigns only feeding into a widely felt sense of dissatisfaction.

The opposition didn’t require an alternative leader that rivalled the popularity of Vajpayee, just a campaign that highlighted the failures of the government. In other words, the government tripped over its own failures, and the opposition merely needed to give a determined push. Many were left to wonder how Vajpayee could suffer his biggest defeat at “the peak of his popularity,” as Outlook put it. Analysing the 2004 elections, Zoya Hasan noted that the “much-hyped Vajpayee factor, which was supposed to render the general election into a one horse race, failed to deliver”.

The “campaign against Sonia Gandhi’s foreign origins clearly backfired,” she said, “as did the highly personalised attacks against her family”. She summed up the defining lesson of the election with these words:

“What verdict 2004 highlights is that something as complex and multi-faceted as an Indian general election cannot, through hype and propaganda, be turned into a presidential style contest between two leaders.”

Going further back to 1977, no individual leader could hope to match the political stature of Indira Gandhi, whose figure loomed as large as ever over the country. A little more than half a decade earlier, she had single-handedly swept the national elections and dealt a crushing blow to Pakistan.

Yet a ragtag coalition, ideologically diverse and with no clear agenda other than to ‘save democracy’ – and with no single projected leader – was able to humiliate Mrs Gandhi. What doomed Indira was not the appeal of the opposition, but the burden of her own failures – from abjectly failing in her promise of ‘Garibi Hatao‘ to the imposition of the horrific Emergency. Again, the opposition, whose chief slogan was ‘Indira hatao, desh bachao‘, didn’t so much win the election as Mrs Gandhi lost it.

The rules of Indian politics

Thus, in the last half century, we have three telling instances of the tallest leaders of their times – who were supposed to be re-elected simply because ‘there was no alternative’ –  being brought to their knees because they failed to meet the expectations they had created. Anti-incumbency, that fabled rule of Indian politics, has always trumped the illusory TINA factor.

Another reason why sweeping triumphs are difficult to reproduce is the factor of constituency-level anti incumbency. While in the British House of Commons, less than one-third of the seats change hands, and in the US House of Representatives, less that even 15%, in India an astonishing 50% of sitting MPs lose their seats. This trend has only heightened since 1991 with the further fracturing of the polity.

Barring the rare wave election, elections in India are more local than national. Modi would do well to look at the 2004 elections, where half of the sitting BJP MPs lost their seats, including stalwarts and heavyweight ministers.

Moreover, besides the national level incumbency, the BJP would also battle against state-level incumbency in 2019, now that it is ruling in 21 states (as compared to eight states in 2014). As Milan Vaishnav points out, state governments of the same party are an asset in national elections if they are starting their terms, but a liability if they are at the fag end of their terms. In five of the core eight states that contribute to 75% of the BJP’s parliamentary seats, state governments are nearing the end of their terms.

This double incumbency makes it extremely likely that the BJP will bleed seats in these eight core states —Bihar, Chhattisgarh, Gujarat, Jharkhand, Madhya Pradesh, Maharashtra, Rajasthan, and Uttar Pradesh —given that it swept 80% of these seats last time. It is highly doubtful whether the BJP can make inroads into eastern and southern India deep enough to make up for its losses in its heartlands of the north and west.

All around us, we are witnessing increasing signs that anti-incumbency has indeed set in. In the latest round of by-elections, the BJP and its allies won just 3 out of 14 seats. Out of the 27 parliamentary by-polls held since 2014, BJP lost nine, retained just seven and failed to win a single new seat. In the politically crucial state of Uttar Pradesh,  theBJP has lost all three of the parliamentary by-polls held this year. Increasing opposition unity, brought into sharp focus at the inauguration ceremony of the Karnataka chief minister, makes the situation even more perilous for the ruling party.

Successive CSDS ‘Mood of the Nation’ surveys also portray the BJP as having significantly lost support in almost all big states since the highs of 2016. In the latest such CSDS survey in May, 47% of the respondents reported that they feel the BJP government doesn’t deserve to be voted back, as opposed to 39% that said it deserved a second chance. Overall the BJP’s popularity was reported to have dipped by 7% over the past year. Even in personal popularity ratings, according to the poll, Rahul Gandhi has narrowed the gap with Modi to 10%, from 17% a year earlier

However, the most alarming finding for the ruling party should probably be the drop of 12 percentage points in Modi’s popularity with farmers over the past year, probably owing to the continuing rural distress. The unfulfilled promises of the 2014 campaign to double farmers’ incomes and substantially increase procurement prices are likely adding to the dissatisfaction.

This finding is backed up by election results in Modi’s home state of Gujarat, where the Congress won the rural vote, bagging 62 out of 107 constituencies, leaving the BJP far behind at 43 seats. In a country where national elections are still largely won or lost in rural areas, this is a deeply worrying trend for the ruling party. If the opposition were able to stitch together a broad coalition, it would be able to tap this sense of dissatisfaction into votes, and wrench a large number of rural seats from the BJP.

The increasing personalisation of the 2019 contest between Modi and Rahul Gandhi – which is nothing but an attempt to resort to the TINA factor – is also a move to offset and distract from these twin dangers of anti-incumbency and opposition unity. The television media and their assorted pundits, always more drawn to personalities than issues, further fuel this TINA debate.

However, if India’s political history is any guide, voters generally tend more to vote on issues and day-to-day interests than on such manufactured constructs. As it turns out, there is always an alternative. This becomes clear, even obvious, after the fact – even if, at the time, many are simply blinded by the shadow of an outsized personality.