While the ruling Telangana Rashtra Samithi saw its tally fall from 90 in 2016 to 55, the saffron party poised itself as the principal opposition in the state. 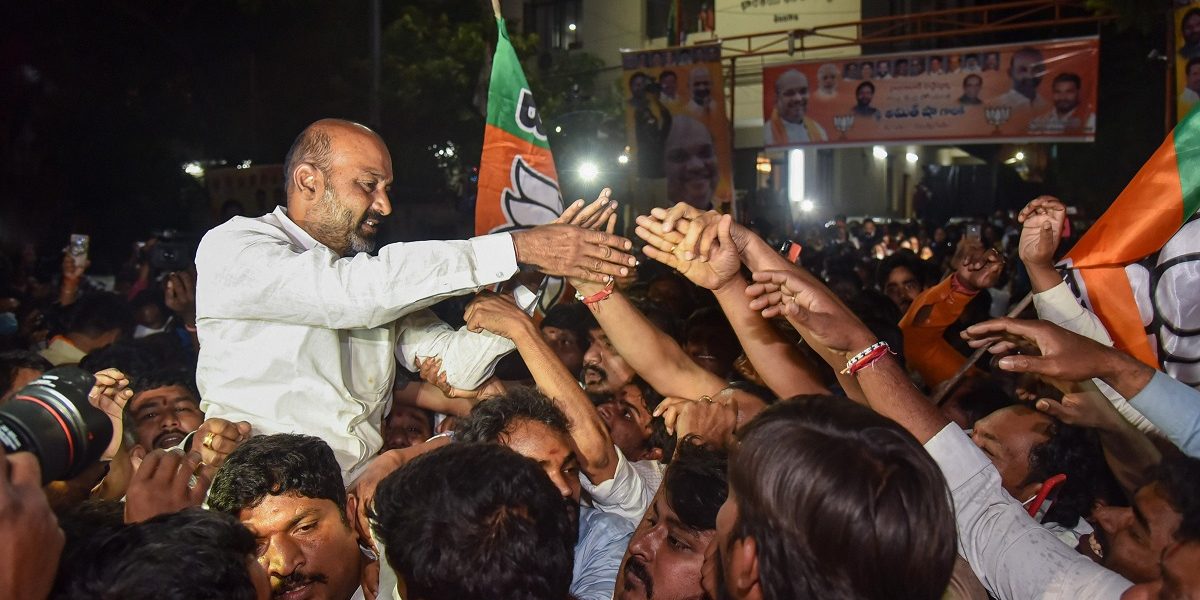 Hyderabad: In the fiercely fought elections to the Greater Hyderabad Municipal Corporation (GHMC), voters in Hyderabad did not give a decisive mandate to any party. While the ruling Telangana Rashtra Samithi (TRS) has emerged as the single-largest party by securing 55 wards out of the 149 for which results have been declared, the BJP made massive gains by winning 48 seats.

The Asaduddin Owaisi-led All India Majlis-e-Ittehadul Muslimeen (AIMIM) once again proved its dominance in the Old City area, winning 43 seats. The Congress’s relegation to the margins was evident, with the party winning only two seats. In several seats, the TRS and BJP had a close fight, indicating that going ahead, the saffron party is likely to be the TRS’s principal opposition.

The big picture emerging from this election is that the BJP’s tally has jumped from a mere four seats in GHMC in the 2016 election to 48 seats this time around, while the TRS’s tally has come down from 99 seats to 55. The moods at the BJP and TRS party offices were also contrasting, with the BJP seeing the verdict as a victory while top TRS leaders admitted the results were disappointing.

There are 150 wards under the GHMC, but counting was stayed in the Neredmet area as per the Telangana high court’s directive. Late on Thursday night, the State Election Commission (SEC) had issued an order which said that ballot papers with a distinguished mark instead of the ‘swastik’ should also be considered as a valid vote. However, the HC put the order in abeyance.

In Neredmet, the TRS was leading by 504 votes and 544 votes had a distinguished mark, according to the SEC. Therefore, counting was stayed until the court pronounces its final order. 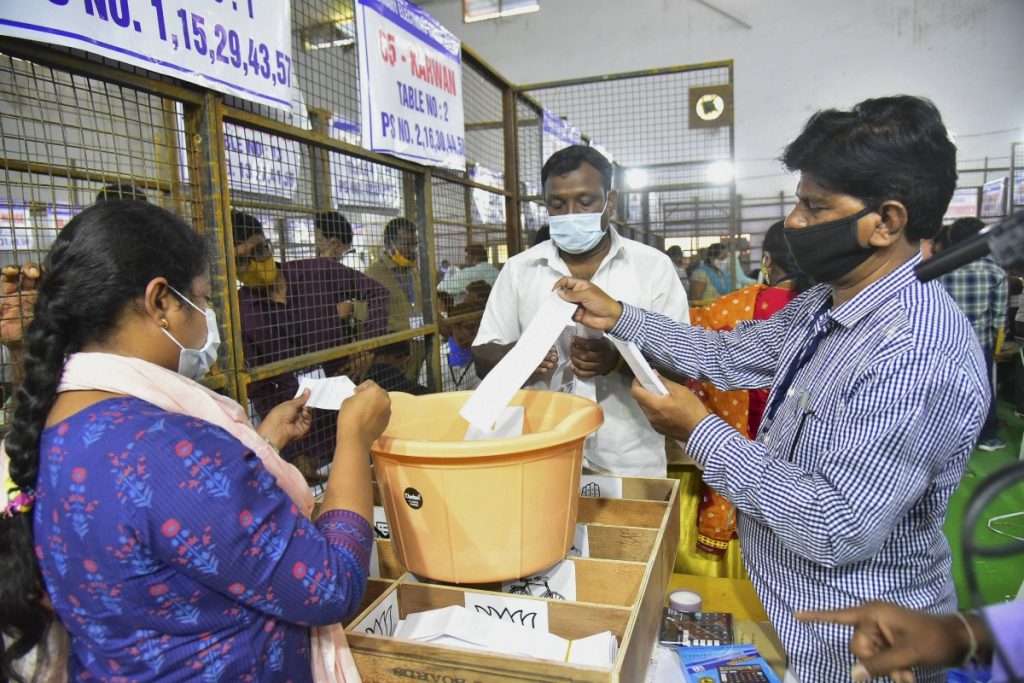 In the run-up to the election on December 1, the BJP had pulled out all the stops to corner the ruling party. A galaxy of national BJP leaders – Amit Shah, Smriti Irani, Prakash Javadekar, Adityanath, and J.P. Nadda, among others – had descended on Hyderabad for the campaign. Even Prime Minister Narendra Modi had visited Hyderabad three days before the December 1 election in order to review vaccine trials at pharmaceutical company Bharat Biotech in the city. Although the BJP had called it an official tour, the timing of Modi’s visit to Hyderabad had left little to imagination.

Although the TRS has the most wards, the ruling party will not be able to secure the Hyderabad mayor’s post on its own.

In addition to the 150 ward members, ex-officio members – elected representatives of the Legislative Assembly, Legislative Council and the Parliament whose jurisdiction falls within the limits of the municipal corporation – are also eligible to vote to elect the mayor.

In total, there are 52 ex-officio members who can vote, of whom 45 are eligible to vote for the GHMC mayor’s election, according to The News Minute. Of these 45, the TRS has the votes of 31 ex-officio members in the GHMC, AIMIM has 10, the BJP 3 and the Congres 1.

With 195 electors, a mayoral candidate will need to receive 98 votes to gain the majority.

With its tally of 55 electors and 31 ex-officio members, the TRS will only be able to garner 86 votes at the most.

This leaves the TRS with no option but to ally with the AIMIM to secure the coveted mayor’s post. In case these parties do come together, the BJP will see it as an opportunity to corner the ruling TRS. The ruling party’s top leaders such as chief minister K. Chandrashekhar Rao and his son K.T. Rama Rao have publicly said that they do not have any relationship with the AIMIM despite describing it as a ‘friendly party’ in the past.

The high-pitched campaign by the parties in the run-up to the elections had witnessed fiery speeches and trading of barbs. The BJP campaign saw a clear raking up of communal issues, with its state president Bandi Sanjay alleging that the Old City of Hyderabad had become a hub of illegal immigrants, who would be“flushed out” through “surgical strikes”. The TRS had denounced the BJP’s campaign and promised “development, instead of divisive politics”.

The BJP’s clear success in the GHMC polls also comes close on the heels of the victory the party had secured in Dubbaka, a key assembly segment in Telangana that had a by-election in November.

Meanwhile, the Telangana Congress state unit president N. Uttam Kumar Reddy has resigned following his party’s poor performance in GHMC polls. The Congress was able to win just two wards, which was the same as its previous tally. The grand old party was considered the principal opposition until the 2018 assembly elections, but its hopes of nursing a comeback seem all but impossible with the emergence of the BJP since the 2019 general election.