The chief patron of the party led by Mehbooba Mufti, who is still under house arrest, talks about the scrapping of Article 370, New Delhi downgrading J&K to a Union Territory from a state and politics in Kashmir.

Jammu: In July 2017, former Jammu and Kashmir chief minister Mehboob Mufti had said, “If Article 35A is tinkered with, there would be no one in the state to hold the tricolour.”

According to chief patron of the Peoples Democratic Party, former member of parliament and Padma Bhushan awardee Muzaffar Hussain Baig, a “proper and more productive course would have been having a polite conversation”.

In an exclusive interview with The Wire about the scrapping of Article 370, New Delhi downgrading J&K to a Union Territory from a state and politics in Kashmir, Baig said, “Scrapping Article 370 and J&K’s special status was already in BJP’s election agenda but downgrading of J&K to Union Territory was not. When Mehbooba made that statement, I was surprised… PDP suffered immensely due to this.”

Baig said he does not know what the future holds for Kashmir, and whether there is a lull before a storm – or whether the people will be forced to reconcile with “altered realities”.

Is it true what is being said, are you ‘New Delhi’s Man in Kashmir‘?

From fighting the slain Maqbool Bhat’s case to receiving the Padma Bhushan in Janaury 2020, the third highest civilian honour – has what ‘Baig Sahab’ stood for changed over time?

We had a law firm in Srinagar and Amnesty International had written a letter to provide legal help. I contacted Kapil Sibal and he was kind enough to present the case in Supreme Court. Moreover, I don’t think the Padma Bhushan has anything to do with the future of Jammu and Kashmir. I don’t take it personally. I think this award was for the people of Jammu and Kashmir.

Is there a reason why you have not approached a court of law regarding the incarceration of former chief minister and PDP president Mehbooba Mufti under the Public Safety Act?

It was a very startling development when Farooq Abdullah went to the Supreme Court to challenge his arrest under Section 107 of the Code of Criminal Procedure (CrPC). Normally when a Naib Tehsildar can relieve you, when he went to the Supreme Court, a PSA was slapped on him. It made the situation from bad to worse. Since, I was under house arrest for some time, the question of knocking at the door of any court became a very doubtful double-edged sword. It would not have been wise.

Before the scrapping of Article 370, you had argued till the last moment that the government of India or parliament does not have the power to scrap J&K’s special status. Do you still believe the move was unconstitutional and illegal?

Do you believe that the people of Kashmir have suddenly forgotten ‘Azaadi’ and even autonomy and only want statehood now? 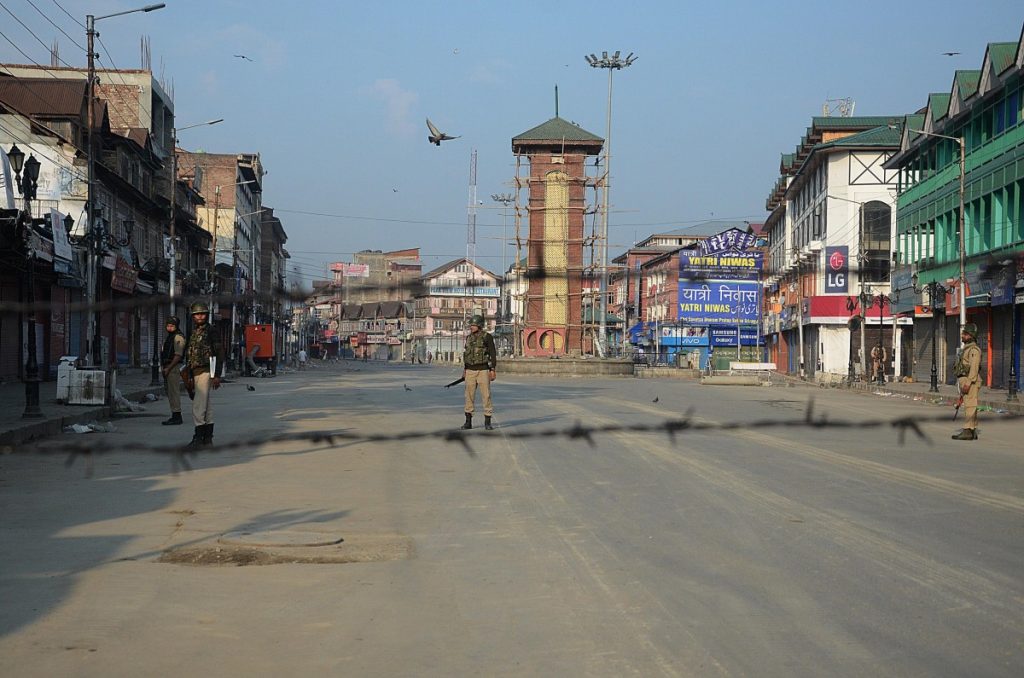 A pigeon flies over the clock-tower, in the city centre Lal Chowk, on the day the special status of Jammu and Kashmir was revoked. Photo: Wasim Nabi

You are the one who wrote the self-rule document and today you are demanding statehood. How does it feel?

Yes. I authored the self-rule document but that was in a historical context. Dialogue between then prime minister Manmohan Singh and Pakistan’s Pervez Musharraf was at a very advanced state. They had agreed in principle to render borders irrelevant. Musharraf had learnt his lesson after the Kargil War. The governments of both countries were on course to attempt something along the lines of a European Union – which came into existence after two world wars.

After the dilution of Article 370, people want statehood restored. They are seeking something on the lines of Article 371. Things have changed. The government of Pakistan is no longer ready to support armed resistance in Jammu and Kashmir.

Don’t you think that before engaging with the Centre and its representatives, it should be a precondition that all the activists and politicians who have detained since August 5 last year be released?

It is a very perplexing situation that three former chief ministers are under arrest. People who swore by the constitution of India, whose families faced social boycotts, who face the threats of militants, whose  relatives were killed; they have been behind bars since last six months.

But I don’t like to use the word precondition, it is a request. If you can’t release them at once, release them one by one. If they commit a crime, you can arrest them again. It is not a preventive detention, it is a conviction, without any charge.

Of course, if someone is indulged in corruption or has joined hands with militants, taking constitution in one hand and helping people with gun on the other hand, if you have some evidence or charge of this nature, then you prosecute them. Whosoever it is.

If you have no such allegations, release them.

You have been advocating land rights, educational rights and job rights. Are you trying to bring a new discourse to Jammu and Kashmir?

If the Supreme Court upholds the decision made by the central government vis-à-vis Article 370 and 35A, it will mean that the legislation which downgraded Jammu and Kashmir was flawless. But than what would be left for the ethnic communities of Jammu region? We should try to evolve a consensus across all ethnic and linguistic identities of Dogras, Gujjar-Bakkarwals, Paharis, Kashmiri Muslims, Kashmiri Pandits in a civilised and responsible manner and request the Government of India to place Jammu and Kashmir under Article 371.

I was the first person who started this debate. After me, some other people have started repeating the same request – Article 371, protection of land and job rights and so on.

Some PDP leaders have already rebelled against the party. You, as chief patron of the PDP have said that it was Mehbooba Mufti’s statement on Article 35A that were responsible for the loss of J&K’s autonomy. Is there an internal crisis in PDP?

I did not make that statement. Scrapping Article 370 and J&K’s special status was already in BJP’s election agenda but downgrading of J&K to Union Territory was not.

When Mehbooba made that statement, I was surprised. Proper and more productive course would have been having a polite conversation with a request to defer the agenda until the confidence of people across the regions was won. Some mischief-monger within the party who enjoyed her confidence might have persuaded her to make this statement.

The PDP suffered immensely due to this. Whether there is a crisis or not will depend on the voters and the workers.

What will be the future of People’s Democratic Party? Will you stay with the party?

I don’t know. I am still in the PDP. I don’t know what the future will hold. I don’t even know whether I will remain in politics. It will depend on the people who are silent. They are not expressing their views at all. There is no political activity on the ground. There are some people who are here and there, busy taking one direction or the other but since I have been in politics for a very long time, I have a different perspective. It is the people who decide.

Do you wish to be the next chief minister of Jammu and Kashmir?

I don’t waste my time thinking who the chief minister will be and who will not. I don’t even know whether I will remain in politics or not. Suppose my suggestions are rejected by people, GOI and also parliament, why should I impose myself on the people?

If everybody rejects my pleas, why should I remain in politics?

You had previously said in a statement that a referendum is not possible. There are talks of invasion of Pakistan-Occupied-Kashmir. Do you think it is possible?

History teaches us that anything is possible. I think that it is possible, but not advisable. Both countries are nuclear powers. Somebody has come up with a calculation that if both countries use their full nuclear power, we won’t see the sun for a hundred years. Entire life will disappear in two years.

So I don’t think and I hope and pray every day that a situation arises where even the talk of nuclear power – anywhere in the world, but particularly between India and Pakistan – does not arise.

When I became minister in 2002, I was also Minister of Ladakh Affairs. So, I had occasion to interact with elected representatives of the Hill Council and their representatives across society. Ladakh has two distinct identities, one is Buddhist dominant in Leh and then there are Shias in the other part of Zanskar. My impression is that Buddhists of Leh would not like to become part of Kashmir again.

Maybe the Shias may want to become part of Kashmir, but the Buddhists would be reluctant. So I am not at the moment advocating that when you upgrade J&K back to a state, I will not be putting it as a condition that Leh should also become part of J&K. No, the people of Leh should decide.

Many commissions in the UT of J&K have been made dysfunctional. Do you think it was a well-thought-out decision to scrap Article 370?

So far as the management of security on the ground was concerned, I think it had been well thought of and well executed. I believe the army, CRPF and BSF, which were deployed in Kashmir, had been instructed not to use force and to be polite with the people.

Even during the period of my house arrest, some people, who were not journalists or others, could come see me and they told me that army or CRPF did not trouble them. However, I don’t mean to say that the silence of people of Jammu and Kashmir means reconciliation. I don’t know what is going on in their heart. I hope they think constructively and responsibly.

I do think there are problems we face at the administrative side, closing of commission, development issues. But I don’t think they will last long. They will have to take some positive and constructive decision that will provide some relief and hope to the people of J&K.

You are one of the few Kashmiri politicians who admire Prime Minister Narendra Modi and Home Minister Amit Shah. Considering the way dissent is being dealt with in the entire country with regard to the Citizenship Amendment Act and National Register of Citizens, do you still admire them or are you reconsidering?

I publicly had admired PM Modi. The way he had initiated various schemes in the country, and reached out to the Muslim countries in the world as well as some other countries, I said, “Prime Minister sahib if you have the support of your colleagues, you may go down in history and you may be remembered like Mahatma Gandhi.”

Unfortunately, lately some issues have cropped up. It started with North-east – with Assamese and Non-Assamese and the issue which was a legal issue because there were some agreements between Assam Student Union and Congress govt, with passage of time became a religious issue. You see those old ladies sitting here and there, you see people with guns going into Universities, you see the country being divided on religious lines. It hurts me

So this religious divide is not good, neither for Muslims nor for Hindus – it is not good for anybody. But how to manage it? Nobody cares what a small person like me talks from a Union Territory sitting in Jammu. Who will listen, even if I make some suggestions?