How the RSS Detested Gandhi

In this excerpt from his recent biography of Gandhi, Ramachandra Guha documents the intense and at times venomous hatred that the RSS and its long-serving sarsanghchalak, M. S. Golwalkar, had for the Mahatma. 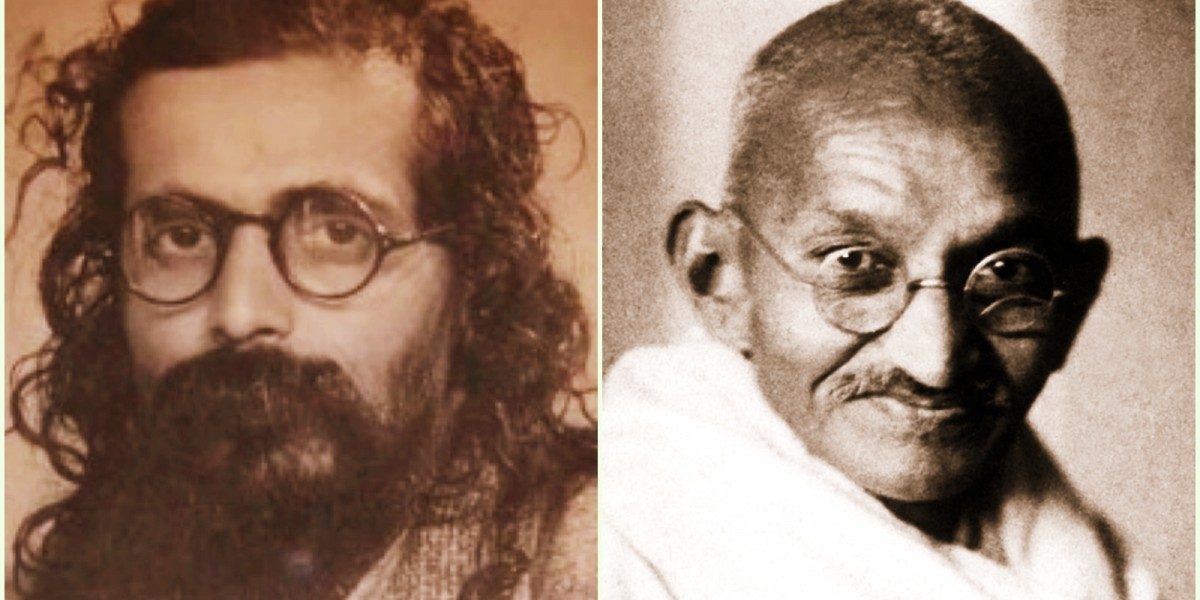 The statements in praise of Nathuram Godse by a series of Hindutva politicians have once more foregrounded the Sangh Parivar’s deeply ambivalent attitude towards the life and legacy of Mahatma Gandhi.

Given the appreciation expressed for Godse by BJP candidates for parliament, and even by BJP Union ministers, how credible are Prime Minister Narendra Modi’s own professions of admiration for Gandhi? The historical truth is that detestation of the Father of the Nation runs deep in the veins of Hindutva.

The riots of 1946-7 had brought radicals on both sides to the fore. On the Muslim side it was the Muslim National Guards and the Khaksars; on the Hindu side the Hindu Mahasabha and the Rashtriya Swayamsewak Sangh (RSS). Founded in 1925, the RSS was now led by M. S. Golwalkar, an intense man of extreme views, determined to purge India of all non-Hindu influences. RSS cadres had played an active part in the violence in the Punjab. Now, in Delhi, they sought to crystallise and take advantage of the swarm of Hindu and Sikh refugees that had come into the city.

On March 8, 1947, a rally of RSS workers of the Delhi Province was held. Some 100,000 volunteers participated. The chief guest was M. S. Golwalkar, who told the gathering that it ‘was the duty of every Hindu to defend his religion’.

Two days later, a meeting of RSS leaders was held in the home of one Sham Behari Lal in Daryaganj. The attendees seemed to be mostly Hindu merchants. The fragile Hindu-Muslim situation in Punjab was discussed. One Lala Hari Chand presented a purse of Rs 100,000 to M. S. Golwalkar on behalf of the Delhi branch. Golwalkar, in his speech, said that if the Hindus perished, the Sangh would perish. Golwalkar added that ‘the disunity among Hindus in the Punjab was the cause of the present calamity. The Sangh should unite the Hindus and the capitalists should help by funds’ ( C. I. D. Report for and March 8 and 9, 1947, in File 137, Delhi Police Records, 5th Instalment, Nehru Memorial Museum and Library).

In the last week of September 1947, Gandhi spoke to a group of RSS workers in the Harijan Colony. He praised their discipline and the absence of untouchability within their ranks, but told them that ‘in order to be truly useful, self-sacrifice had to be combined with purity of motive and true knowledge.’ Many allegations that the Sangh was against Muslims had been brought to Gandhi’s notice. He reminded the Sangh workers that Hinduism was not an exclusive religion, and that Hindus ‘could have no quarrel with Islam’. The strength of the Sangh, said Gandhi, ‘could be used in the interests of India or against it’ (Report in Harijan, September 28, 1947; Collected Works of Mahatma Gandhi, Volume LXXXIX, pp 173-5).

Gandhi was ambivalent about the RSS; the Sangh, for their part, actively distrusted him. An article in their magazine, Organiser, savagely attacked Gandhi’s attempts at forging communal peace in Bengal. ‘Nero fiddled when Rome burnt’, it remarked: ‘History is repeating itself before our very eyes. From Calcutta Mahatma Gandhi is praising Islam and crying Allah-o-Akbar and enjoining Hindus to do the same, while in the Punjab and elsewhere most heinous and shameless barbarities and brutalities are being perpetrated in the name of Islam and under the cry of Allah-o-Akbar’.

Gandhi had reached out to the Muslims; but the RSS believed that ‘Muslims do not attach any importance to Gandhiji and his words unless it suits them. His policy towards the Muslims has utterly failed to the chagrin and detriment of Hindus. He is, however, still held in great reverence and esteem by the Hindus, although they are in no mood to appreciate his subtleties and much less his Islamic preaching and appeasement’.

This article in the Organiser urged Gandhi to put his acknowledged leadership of the Hindus to other ends. The Mahatma, it said, ‘has unprecedented opportunity of organising and consolidating Hindus and making them and Hindusthan great and strong within and without to be reckoned with by any aggressive nation of the world’ (Raghu, ‘Whither Mahatma  Gandhi?’, Organiser, September 11, 1947).

This was at once a critique and a lament. If only Gandhi would use his status and position to actively and militantly lead the Hindus, thus to show Muslims their place while simultaneously forcing Hindus themselves into the councils of the world! From the point of view of the RSS, Gandhi was a leader gone awry. Their own endeavour, as a policeman assigned to their beat reported, was ‘for building the Hindus physically strong and for establishing Hindu rule in India’. The RSS believed ‘that the present government was not cent per cent a Hindu Government but still they were not opposed to it as with the help of this government they would be able to establish purely a Hindu State’.

According to the Sangh volunteers, the Muslims would quit India only when another movement for their total extermination similar to the one which was started in Delhi sometime back would take place. … They were waiting for the departure of Mahatma Gandhi from Delhi as they believed that so long as the Mahatma was in Delhi, they would not be able to precipitate their designs into action. They were further of the opinion that at the time of the forthcoming Id-ul-Zuha festival, if the Muslims would slaughter any kine [cows] of which the Sangh people would get a scent, then there was every possibility of communal disturbances in Delhi. (‘Source Report’, dated October 24,  1947, signed Bhagwan Das Jain, S[tation] I[nspector], in File 138, Delhi Police Records, 5th Instalment, NMML).

In November 1947 M. S. Golwalkar returned to Delhi. He collected money from supporters, met RSS cadres and assessed the progress of the Sangh in Delhi. Several thousand new members had been enrolled. An Intelligence Bureau report dated November 15 noted that ‘the workers of the Rashtriya Swayam Sewak Sangh, especially those coming from West Punjab as refugees, intend starting communal trouble in Delhi after the Diwali festival. They say they could not tolerate the sight of Muslims moving about in Delhi and collecting large amounts from business while the Hindu and Sikh refugees, who were made destitute for no fault of theirs but only because they opposed the Muslim League and establishment of Pakistan, were dying of starvation and would have to freeze dead with chill in the coming winter. … It is reported that some [RSS] workers have gone out to fetch arms and ammunition for the purpose’.(Reports dated November 10, 15 and 17, in ibid.)

The annual function of the Delhi RSS was celebrated at Ramlila Ground on December 7. The main speech was by Golwalkar, who spoke for an hour and a half. He began on a visible note of self-congratulation: ‘The RSS had so many branches throughout the length and breadth of India that it would take twenty to twenty-five years to visit all of them. Despite continuous touring he had succeeded in seeing only a few of them. People were surprised to see the progress of this organisation, which was not heard of a few years back, and regarding which they had seen nothing in the press…’.

Golwalkar then turned to the aims and ideals of the Sangh. After eulogising the medieval warrior-kings Shivaji and Rana Pratap, he spoke of the importance of Hindu unity and self-respect. ‘We should not be ashamed to call ourselves Hindus’, he remarked: ‘The Sangh had taken a vow to keep up our ancient culture…’.

The following evening, a smaller and more focused meeting was held in the Sangh’s camp on Rohtak Road. Some two thousand RSS full-timers were present. Addressing this group of activists, Golwalkar said ‘We should be prepared for guerilla warfare on the lines of the tactics of Shivaji. The Sangh will not rest content until it had finished Pakistan. If anyone stood in our way we will have to fight him to, whether it was Nehru Government or any other Government. The Sangh could not be won over.’

Also in the meeting was a policeman in plain clothes. His report noted that, ‘referring to Muslims’, M. S. Golwalkar

said that no power on Earth could keep them in Hindustan. They would have to quit the country. Mahatma Gandhi wanted to keep the Muslims in India so that the Congress may profit by their votes at the time of election. But, by that time, not a single Muslim will be left in India. … Mahatma Gandhi could not mislead them any longer. We have the means whereby such men can be immediately silenced, but it is our tradition not to be inimical to Hindus. If we are compelled, we will have to resort to that course too (Reports by Kartar Singh, Inspector, C. I. D., dated December 7 and 9, 1947, in ibid.).

The mood in Delhi during the second half of 1947 was very ugly. Angered by the violence in the Punjab, inflamed by the stories carried by Sikh and Hindu refugees, RSS militants in India’s capital wished to purge this ancient city of its Islamic influences, of its large and well-established Muslim population. M. S. Golwalkar and the RSS were even thinking of having men like Gandhi and Nehru—who stood in the way of making India a Hindu theocratic state—‘immediately silenced’.

[Excerpted with the author’s permission from Ramachandra Guha, Gandhi: The Years That Changed The World, Penguin/Allen Lane]