How the Left Can Get Out of Its Rut

The Left can hardly survive by accepting the scenario established by globalisation and offering resistance with piecemeal struggles against neoliberal programmes and policies. 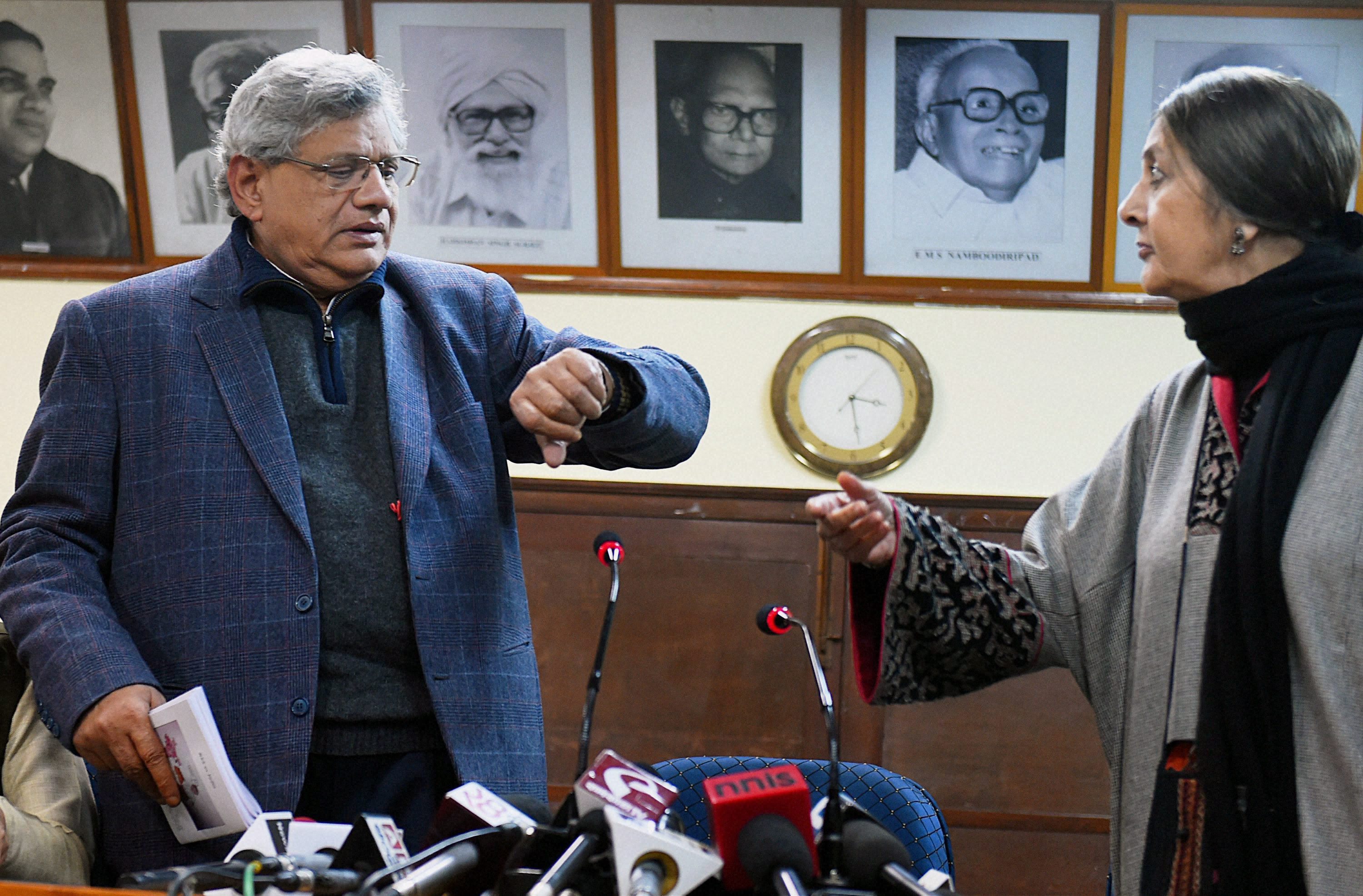 The Clock is Ticking, Comrades: General Secretary of the Communist Party of India (Marxist) Sitaram Yechury with politburo member Brinda Karat at the party's headquarters in New Delhi on Monday. Credit: PTI Photo by Shahbaz Khan In a recent article in The Hindu evocatively titled ‘Things the Left Needs to Do Right’, Prabhat Patnaik raises a most pertinent question for left-democratic circles in India.

The poor showing of the Left in most of the recent assembly and parliamentary elections underlines a grave erosion of their support base. Tracing the roots of the problem, Patnaik argues that the Left is caught in a time-warp where the Leninist problematic that was relevant to the period ending with the World War II still governs the Left parties’ thinking, though that is now out of step with present-day realities.

The need of the hour, according to him, is to mobilise the democratic forces in the country against neoliberal policies that have followed globalisation and the semi-fascist forces now ruling the roost in politics. But globalisation, as far as I can understand, is a process that has formed a kind of cartel of the imperialist capital of various dominant capitalist countries (leaving out the Chinese and the Russians) with consolidation aided by financialisation.

It is also a loose military bloc, with NATO still active after the end of the Cold War, led by the United States and its armed forces. The military show of strength it puts on from time to time is aimed at threatening all opposition to this cartel and subduing national aspirations for equitable development in the former Third World countries.

Imperialism, in other words, has not left the scene, but is active in a new guise. It is dictating the economic – and following from it, the social – policies of all client states.

The regional trade agreements are also by and large dominated by imperialist capital. The end result for most former Third World countries has been a new form of the old subservience. All their welfare policies to lift the common masses out of dire poverty and a stressed life have been suborned. As Mahbub ul Haq showed presciently in the 1998 Human Development Report of the UNDP, the widespread insecurity and ruthless destruction of all social bonds and mores that follow globalisation raise the incidence of crime phenomenally.

The Left and democratic forces can hardly survive by accepting the scenario established by globalisation and offering resistance with piecemeal struggles against neoliberal programmes and policies and mobilising people against the attack on civil rights. They must counter-pose to the dominant discourse of imperialist capital, supplemented by fascist ideology, an alternative vision of society – enunciated both through political ideology and a country-wide cultural movement.

Aspirations of the suppressed minorities – whether religious, caste-based, ethnic and national –  must find room in this alternative socio-political model. The prevalent lynch-culture, promoted by globalisation, commercial popular culture and fascism, must be countered with a vision of solidarity, fraternity and human concern.

The unconcern of a government at farmer suicides, while it scurries to scotch any rumour of starvation death, exposes the utter callousness of the ruling dispensation. Civil rights must be enunciated as  the necessary consequence of such a humane and militant politics of the masses. The effects of globalisation must be fought down to the grass-roots level, and not only in the national public fora. Only people armed with such a programme and inspired by such a vision can challenge and effectively fight globalisation.

Hiren Gohain is a writer and scholar. He lives in Guwahati.