Those behind the #IndiaSupportsCAA campaign, led by Prime Minister Narendra Modi himself, pumped huge sums of money online to gather support for the government as anti-CAA protests swept across the country. 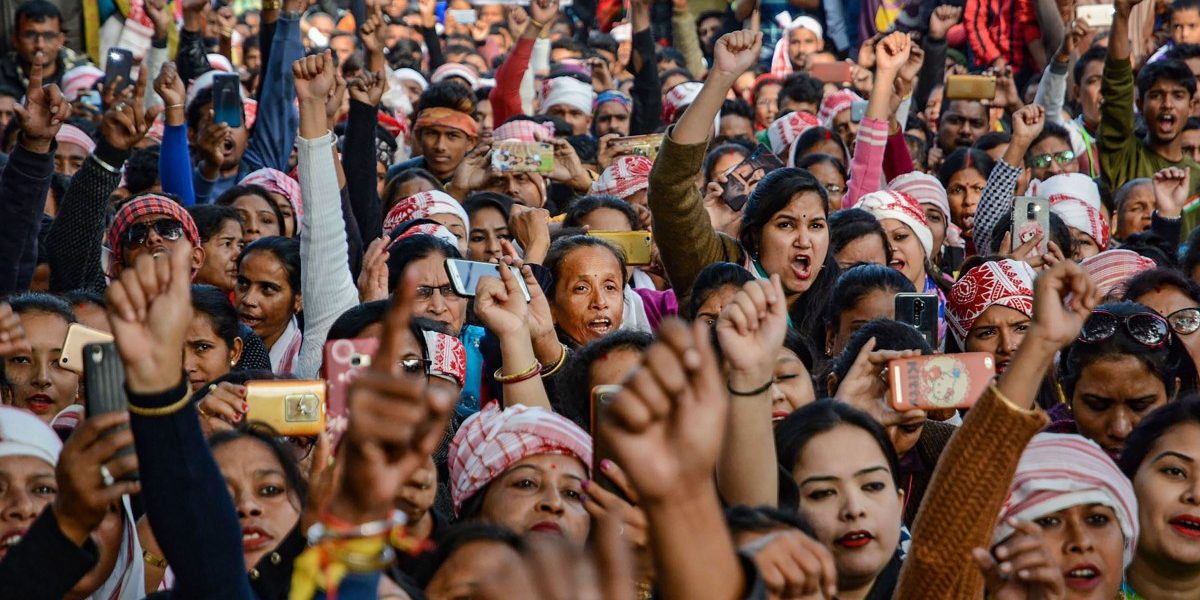 Social media today has gained significance as a ‘leader’ in leaderless movements. Earlier, newspapers or mouthpieces were used to galvanise public opinion; today, people use social media platforms to get news and information on issues relevant to them. It helps to mobilise the online audience to act offline.

Social media platforms have also become a key venue for political debates. Rather insidiously, they have become a handy tool for authoritarian regimes to divert public attention, spread fear and target dissent. A case in point is what happened after amendments to India’s citizenship law were made last year.

The Citizenship Amendment Act (CAA) was passed on December 11, 2019, triggering fury and protests across India. Tens of thousands of people, including students and rights activists, participated in peaceful protests in different cities. Within days, several chief ministers had also refused to implement the CAA in their respective states – Maharashtra, Kerala, Punjab, Rajasthan, West Bengal and Madhya Pradesh. The chief minister of West Bengal, Mamata Banerjee, in fact, said, “As long as I am alive, CAA will not be implemented in Bengal. No one has to leave the country or the state. There will not be any detention centre in Bengal.”

Strategies to gain support for the CAA

The nationwide protests, and responses by opposition parties in many states, put the Indian government led by Prime Minister Narendra Modi on the back foot. Under pressure, the government decided to launch several online and offline campaigns, including a social media campaign, missed call campaign and nationwide Jan Jagran Abhiyan, to generate public support in favour of the CAA.

Before coming up with clickbait methods, like ‘promise of sex’, ‘jobs’, ‘free mobile data’ and ‘Netflix accounts’ as part of the ‘missed call campaign’ to drum up support for the CAA, the BJP started promoting a video by Jaggi Vasudev, popularly known as Sadhguru.

Also read: Amit Shah Says BJP Got 52 Lakh ‘Pro-CAA’ Calls. How Many Were by Lonely Hearts?

The video shows Sadhguru addressing a gathering when a young woman raises a question about the CAA. He begins sharing his opinion by saying, “I have not read the Act fully. I only know it from the newspapers and whatever else is generally out there.” However, he goes on to give his response in a 21-minute-long reply. 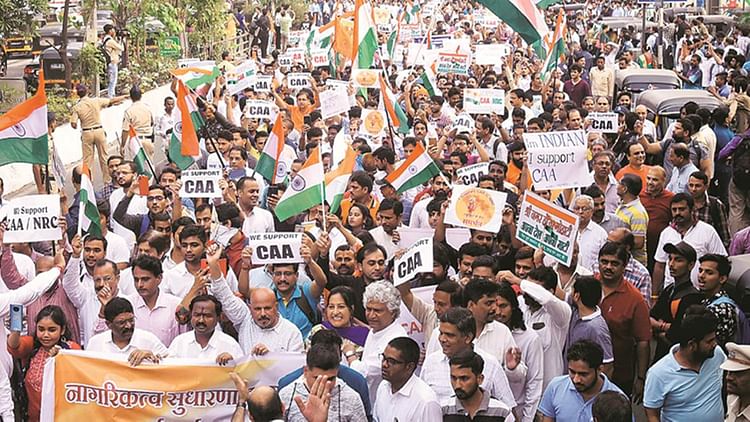 Sadhguru, who has a huge follower base and has the potential to influence millions through his talks, posted on this video on all his social media profiles. In the video, he asks students to read the Act before protesting, though he himself had “not read the Act fully”. Finally, Sadhguru ends his speech by saying, “…illiterate youths in the universities went wild” and breaks into laughter.

On December 30, 2019, Modi tweeted, “Do hear this lucid explanation of aspects relating to CAA and more by Sadhguru Jaggi Vasudev. He provides historical context, brilliantly highlights our culture of brotherhood. He also calls out the misinformation by vested interest groups. #IndiaSupportsCAA.” He posted the YouTube link to the video, kickstarting the ‘India Supports CAA’ campaign.

On the same day, Isha Foundation, run by Sadhguru, also posted a Twitter poll that asked users whether they think anti-CAA and anti-NRC (National Register of Citizens) protests were justified, followed by the link to his video. From the available information, it can be gathered that 11,439 Twitter users took part in the opinion poll. However, the poll was concluded on the same day after 63% said anti-CAA and anti-NRC protests were justified. 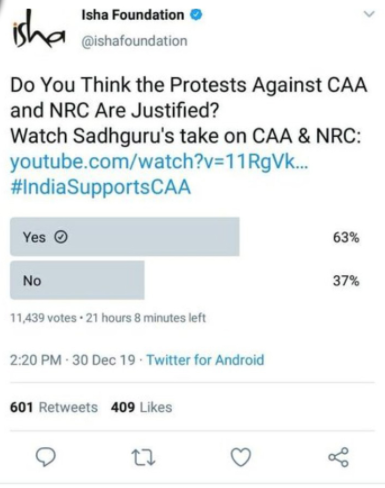 Now, the crucial question one must ask is, what could have been the circumstances that convinced Sadhguru to talk about the highly controversial and polarising CAA in a misleading and avowedly uninformed manner, while unfairly targeting anti-CAA protestors, and labelling university students and research scholars as “illiterate youths”?

Home minister Amit Shah also posted the same video of Sadhguru on Facebook and said, “Stop believing lies and half-truths on CAA. Here is a very well-articulated explanation by @SadhguruJV ji. I urge everyone, especially the youth, to watch and get a historical perspective on why we need CAA. Do share it with others too. #IndiaSupportsCAA”.

This video was premiered on Sadhguru’s English YouTube channel on December 28, 2019. Sadhguru posted the video on his verified Twitter and Facebook profiles on December 29 morning. However, the BJP started promoting Sadhguru’s video from December 30, 2019, and the first sponsored promotion was seen by more than one million Facebook users.

Since December 30, 2019 to January 23, 2020, the page spent Rs 15–17 lakh on Facebook ads, which were seen more than 10 million times, with the most views in West Bengal, Uttar Pradesh and Maharashtra. The maximum viewership in West Bengal is noteworthy given that it is a border state where the BJP has been trying to make inroads, and is set to use all its might to try and win the upcoming assembly polls. 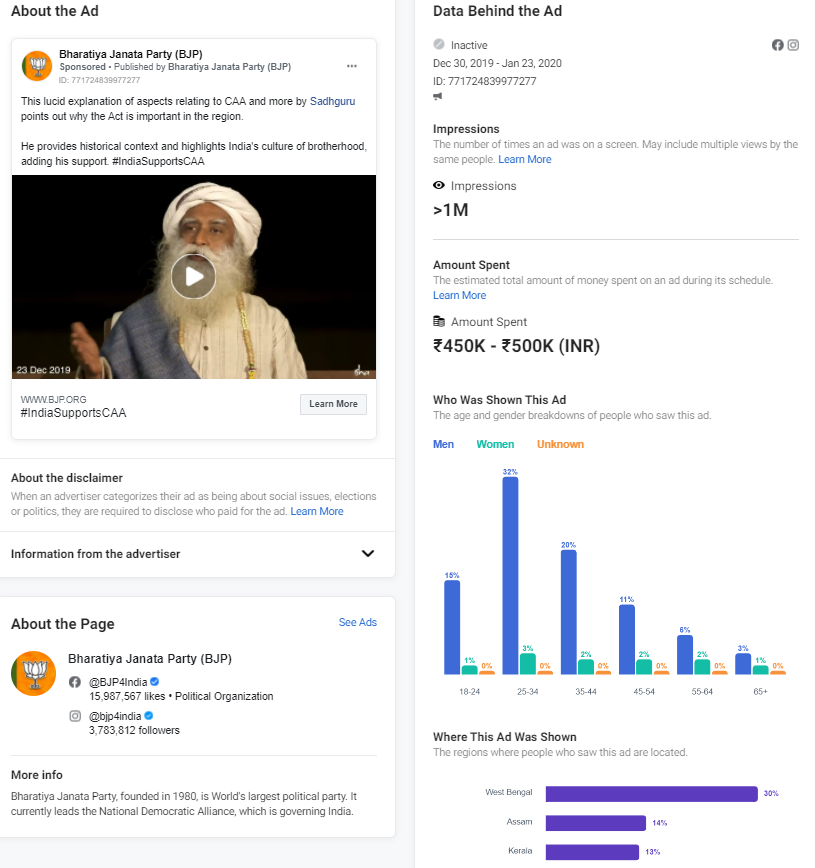 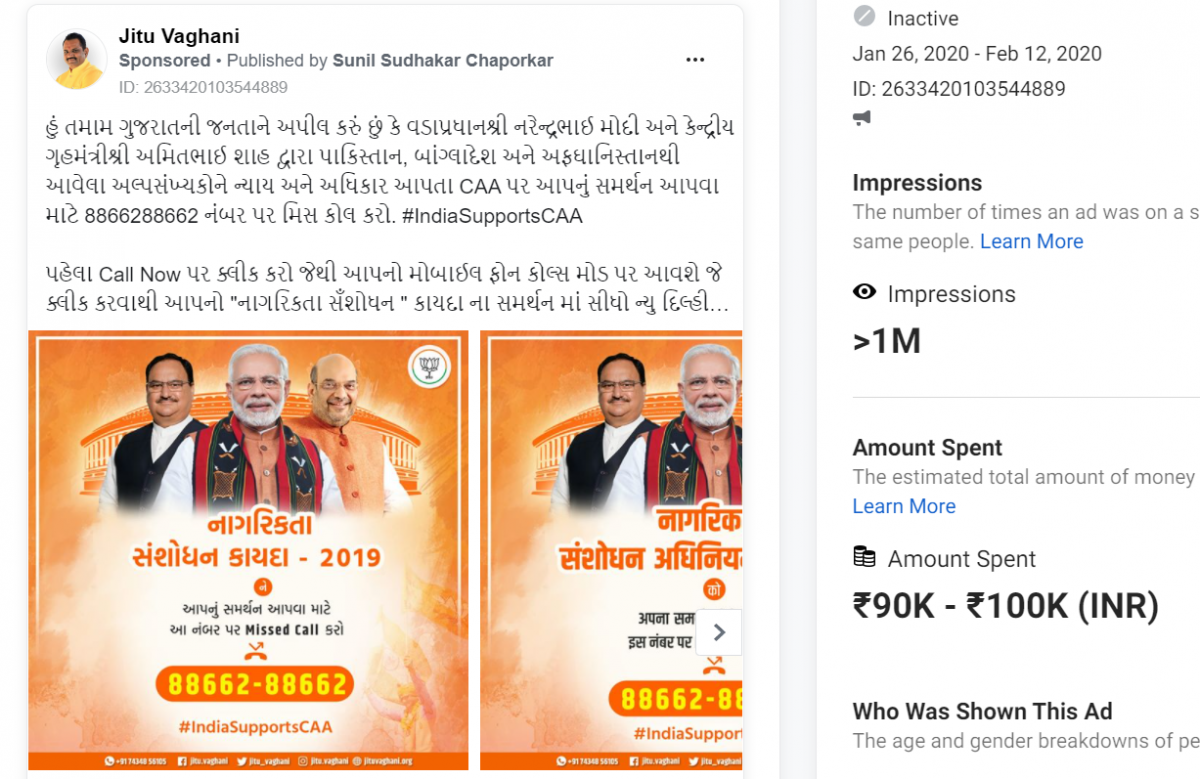 As many as 99 Facebook pages, including BJP leaders, state BJP units, other fan pages run by BJP supporters and some pro-government media houses ran a total of 220 Facebook ads between December 16, 2019 and March 9, 2020.

So, in 36 days – 14 days prior and 17 days after the paid #IndiaSupportsCAA campaign run by the BJP – total posts and interactions were down to 1,173 and 1,691,272 respectively. This goes to demonstrate the injection of funds to push a certain messaging online.

Yet, #IndiaSupportsCAA is a failed campaign

Further, during the paid campaign carried out by the BJP Facebook page, the daily average number of Facebook posts with #IndiaSupportsCAA was 356 and average interactions linked with those posts were 3,02,092.

Thus, the behaviour of online audiences clearly indicates that those who had engaged with the #IndiaSupportsCAA campaign earlier did not continue their engagement for long, and later either ignored or dismissed the campaign. Being a cosmetic injection, the pro-CAA campaign did not self-sustain, itself the anti-CAA campaigns that seemed to be more organic.

This aggressive #IndiaSupportsCAA campaign proves the government’s standpoint about the CAA. While a large number of citizens were against the CAA and NRC, and supported anti-CAA, anti-NRC protests, a handful of right-wing politicians attempted to overthrow public opinion with the help of money power, without trying to understand citizens’ core concerns.

Thus, they continued financing ads on social media platforms to spread misinformation and target dissent. But, in this paid and artificial campaign, the right-wing failed to gain enough support. They may be more successful next time,

Money power and an increasing influence over social media can play a significant role in crushing democratic values, and they have the ability to create divisions in society.

The challenge ahead of us is much greater than it was yesterday. It is a challenge that faces all democracies across the world grappling with the new reality of social media and its power to disseminate divisive, intolerant and misinformed views that can even shape election results. It is certainly a challenge to reckon with.

Buddhadeb Halder is a Post-Doctoral Research Associate with the Arts and Humanities Research Council-funded project titled “Reimagining citizenship: The politics of citizenship amendment act in India” (AH/V001809/1) at the University of York.