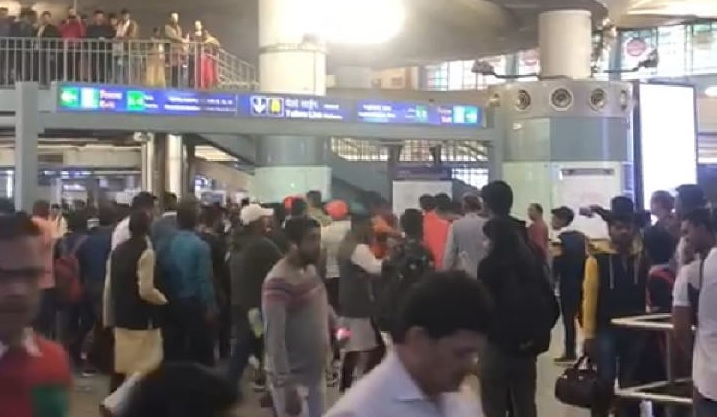 New Delhi: In a sign that there is to be no let up in the strident Hindutva campaign to polarise the national capital on the issue of the Citizenship (Amendment) Act, a group of right-wing activists on Saturday took their signature call for violence – ‘Desh ke ghadaaron ko, Goli maaron saalon ko‘ – to the city’s most busy metro station, Rajiv Chowk, which lakhs of commuters use every day.

A brief video clip of the incident, which tookplace at 10:52 am,  was posted on Twitter as 12 pm.

Men shouting “desh ke gaddaaron ko, goli maaron saaron ki” in broad daylight, in the middle of Delhi, at Rajiv Chowk metro station, earlier this morning. This is how Hindu terror is normalised. Please amplify. Everyone should know the dangerous direction this country is taking. pic.twitter.com/80cKO95MF8

This clip was shot by Vaibhav Saxena, a commuter, who told The Wire that he saw a group of 10-12 people wearing saffron clothes shouting the slogan inside the station. “Other commuters were shocked, and made room for them since they were scared. After some time, the security people came and took them away.”

Also in the day, a group of activists marched through the busy shopping area of Connaught Place shouting the same provocative slogan without the police restraining them.

One commuter who was witness to the shouting of slogans at the metro station but was not able to video the incident said the activists also shouted ‘Jai Shri Ram’. “There was a big crowd outside gate number 3,” he said, estimating the crowd at around 500 people. “And they were shouting ‘Desh ke ghadaaron ko, goli maaro saalon ko’ and ‘Jai Shri Ram‘. The commuter, whose identity The Wire is withholding, said a smaller number of activists also entered the station and shouted their slogans inside. “I was running late for a meeting so could not stay long,” he said.

PTI quoted DMRC officials as saying six people were detained by security staff at the station and “immediately handed over to the Delhi Metro Rail Police for further necessary action”. PTI said its reporter saw some of the activists get off a train and shout the slogans.

While the call to violence agains perceived ‘enemies’ of the country has become a street-level staple of the Hindutva groups in recent years, the slogan shot to prominence during the Bharatiya Janata Party’s campaign for the Delhi assembly elections earlier this month when Anurag Thakur, minister of state for finance in Narendra Modi’s government, publicly incited party supporters to shoot those they regard as “traitors”.

Following Thakur’s exhortation, there were at least two incidents in which gunmen opened fire on those peacefully protesting the CAA a Jamia Millia and Shaheen Bagh. And during this week’s communal riots in north-east Delhi, more than a dozen of the 42 people confirmed killed fell victim to firearms.

In a hearing before Justice S. Muralidhar, then a judge of the Delhi high court on February 26, rights activists Harsh Mander and Farah Naqvi sought the registration of an FIR, a demand the Modi government’s solicitor general Tushar Mehta strongly opposed. The police was directed by the bench to take a decision on filing FIRs against Thakur, other BJP leaders like Kapil Mishra and Parvesh Singh Verma, and any other politician, in 24 hours but the next day, the matter went before chief justice D.N. Patel, who extended the deadline by four weeks.

In an interview to Karan Thapar for The Wire, former Delhi police commissioner Ajay Raj Sharma said that had he still been in charge of the police force in the city, he would have moved to arrest Anurag Thakur despite the fact that he is a minister.

The fact that Hindutva groups have now been emboldened to raise their provocative slogan in crowded public areas is a reminder, say observers, of what the failure of the police and courts to act in a timely fashion can lead to.