The hill state has never repeated a government since 1985. Therefore, the BJP is making all efforts to ensure its vote base does not slip away. 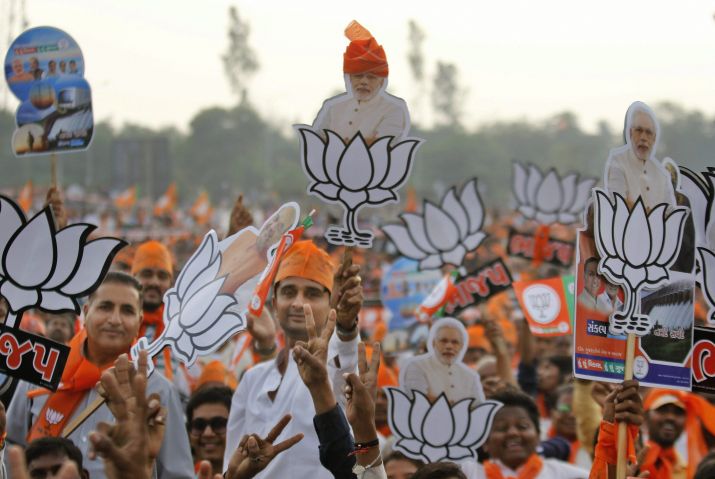 New Delhi: Even though the Aam Aadmi Party (AAP) suffered a setback in its Himachal Pradesh election campaign after Satyendar Jain was arrested by the Enforcement Directorate in a money laundering case, the party’s entry into the poll arena has made the ruling Bharatiya Janata Party (BJP) nervous.

The saffron party has also been forced to adopt a more youth-oriented campaign in the state.

A fight against anti-incumbency, history and a new opponent

Therefore, the BJP has every reason to be nervous. First, it will be fighting against history to seek a return to power. Secondly, it would have to prevent AAP from taking away voters from its support base.

In the 2017 assembly election, the BJP secured 48.8% votes and won 44 seats. It had increased its vote share by 10.33% and seats by 18. On the other hand, the Congress had polled 41.7% votes and won 21 seats – down by 15 seats in the previous election. Congress lost a lot of seats despite its vote share falling by just 1.11% compared to the previous election.

As it fights anti-incumbency too this time, the BJP understands the importance of not letting its voters slip away. In retaining the voters and enlisting the support of newer ones, ground-level workers and leaders appear to be playing a crucial role.

While senior leaders can provide a pitch for the polls, activists at the ground level go door to door and inform voters about the party’s policies and plans.

How the BJP engages workers to woo youngsters

In the 2017 assembly election, the BJP had set up six war rooms across Himachal Pradesh to monitor the campaign and also the work being put in by each and every worker at the ground level. The effort had paid off. This time too, the party would be adopting a similar approach of micromanagement.

Apart from wooing its traditional supporters in the state, the BJP, this time, has reached out to the youngsters as well. It has launched a ‘One Booth 20 Youth’ campaign – in which BJP’s party workers would directly interact with 20 youngsters in the areas falling under each of the 7,500 polling booths in the state.

The BJP is also expecting as many as one lakh supporters to the rally in Mandi on September 24 from where Prime Minister Narendra Modi is scheduled to launch the party’s poll campaign. This rally would be organised by the party’s Yuva Morcha.

BJP’s state in-charge, Avinash Rai Khanna, recently said that the party has recognised the importance of its various wings, which have been assigned the task of interacting with youngsters. However, AAP’s arrival on the poll scene is being seen as a major reason behind the move.

AAP has demonstrated in Delhi and Punjab, where it has governments now, and even in states such as Haryana and Uttarakhand, where it lost, that youngsters can make a major difference in winning state polls. Not only do they constitute a large section of the electorate, but their ability to use social media makes them a multiplier force in elections as they are also able to influence others to vote for the party they support.

In fact, the manner in which AAP and BJP operate behind the scenes is quite similar. Both parties rely heavily on technology and social media to get their message across to the voters. While the Congress also uses war rooms, it has of late struggled to keep the youngsters engaged.

In the last elections, the BJP had set up six war rooms in Himachal Pradesh. Most of these war rooms were set up in computer centres across the state. From these centres, the party managed to control the campaign of various candidates and the activities of its grassroots-level workers from the Yuva Morcha (youth wing), Mahila Morcha (women’s wing), Kisan Morcha (farmers’ wing) and the Scheduled Caste (SC) Morcha.

Micromanagement or a strategy to win?

To ensure that the workers stayed in touch with the electorate and reached out to them as planned, the BJP deployed two callers at every control room. They would not only take regular updates from the party cadres but also call up the voters to see if the party workers were approaching them and explaining the party’s plans and programmes to them.

They would input data into an excel sheet to provide regular feedback to the BJP’s central office in Delhi.

Last time the party had also sent observers from Haryana to take corrective actions, which helped the party plug the gaps with this strategy.

This style of operation seemed to have worked for the BJP in the last elections. It not only managed to win over a large number of voters but was also able to convert these votes into significant wins and formed the government in Himachal Pradesh.

This time, in addition to the system of having such war rooms, the BJP has constituted 18 departments and roped in the services of professionals from various fields for running them. The idea again is to reach out to people from different strata and professions and to thereby reduce anti-incumbency as far as possible.