The ten reserved seats of the state recorded a jump of 10% to 16%. The Congress sees this as a sign of a change while the BJP claims it is a renewed Modi wave.

Bhopal: In Madhya Pradesh, reserved seats have recorded a whopping 10% to 16.3 % surge in voting turnout, according to the Election Commission of India (EC).

The state has 29 parliamentary seats, of which ten seats are reserved for Schedule Caste and Schedule Tribe. According to 2011 Census, SC/STs comprise 36.61 % of the state population (SC: 15.51 %, ST: 21.1 %). Out of the ten seats, Tikamgarh, Bhind, Dewas and Ujjain are reserved for SCs, while Shahdol, Mandala, Betul, Ratlam, Dhar, and Khargone are reserved for STs.

Tikamgarh has recorded the highest surge at 16.33% upsurge, while Dewas recorded the lowest jump of 8.76% in voter turnout from last general election. Overall, EC data suggests that there has been a 11.15 % surge from 2014.

The reason of high turnout

Addressing a press meeting after the last phase of polling, state Chief Electoral Officer, V.L. Kantha Rao said, “We are not on top as far as overall voting percentage is concerned, as there are states like West Bengal where 80% voting is normal. But we have been on top in all the four phases as far as increase in voter turnout is concerned. In the seventh phase in Malwa-Nimar region, the voting percentage was beyond 75%. Besides, we have recorded massive surge in reserved seats, which is quite astonishing.”

Also read: The Inevitable Saffronisation of the Bhopal Elections Is in Full Swing

When asked about a reason for this massive jump, he said, “Though we have performed well overall,  hyper local and regional campaign content, doorstep delivery of voters slip, proximity to polling booths and a fair and fearless environment are the major reasons behind the high jump in voting percentage.”

But political parties and experts attribute the surge to different reasons.

The Congress has claimed that the high turnout shows the anger of voters against the current regime and local leaders. It said that the locals have shown trust their trust in Rahul Gandhi and Congress.

The BJP, on the other hand, believes that the upsurge can be attributed to a strong Modi wave. 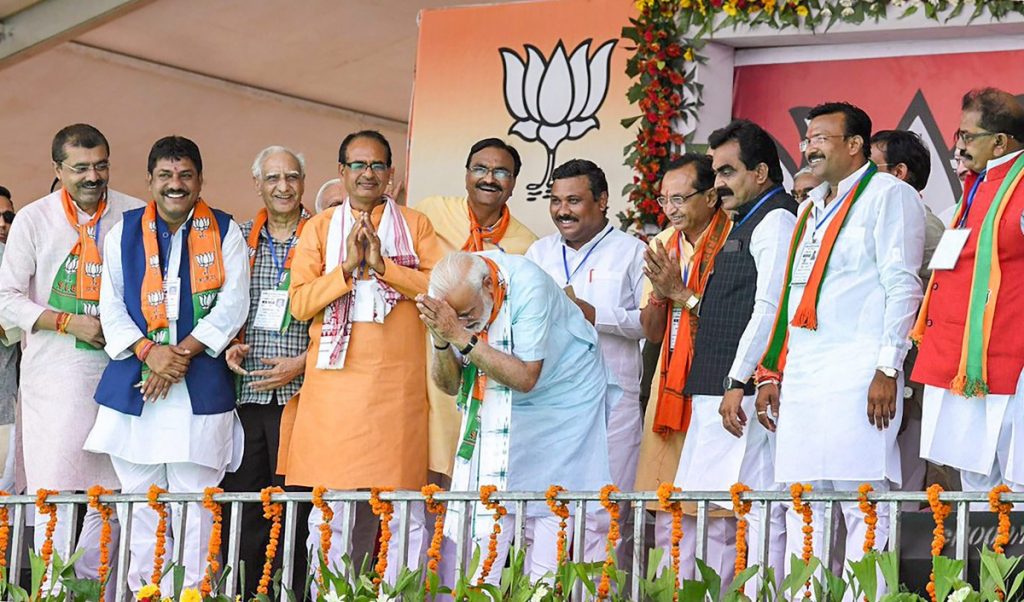 Prime Minister Narendra Modi with former chief minister Shivraj Singh Chouhan and other leaders at an election rally in Khargone district of Madhya Pradesh on May 17, 2019. Credit: PTI

According to senior journalist Ashutosh Shukla, the rise of two political outfits in last couple of years in Madhya Pradesh – the Gondwana Gantantra Party (GGP) and Jai Adivasi Yuva Sangathan (JAYS) – in different pockets of the state has created political awareness among tribal voters. This, he said, is a main reason behind the high voting percentage.

“Both the parties fight for the rights of tribals and Dalits and they have a huge influence over tribal and SC voters,” Shukla said.

GGP has influence in Shahdol, Mandala, Balaghat, Chhindwara, Sidhi and Betul parliamentary seats which share the border with Chhattisgarh, Maharashtra and Uttar Pradesh.

While JAYS is playing key role in the seats of Malwa-Nimar region such as Dewas, Ratlam, Dhar, Khargone, Khandwa, bordering Gujarat, Maharashtra, Gujarat and Rajasthan have an impact on other seats of the region.

Both have given a wide berth to national parties. But since the last assembly election, the JAYS has tilted towards the Congress and supported the grand old party in both the assembly and general elections.

“The reserved seats votes have been slipping from BJP and tilting towards Congress. The reasons are numerous,”said GGP leader Gulzar Sing Markam.

Referring to the Supreme Court’s recent order on the Forest Rights Act and jump in Dalit atrocities, Markam said,“The BJP has developed an image of a pro-businessmen, anti-tribal and anti-Dalit party, which wants to hand over forests to businessmen – the recent SC order proves it. Besides, the atrocities against Dalits have slightly increased under Modi’s regime and instead of acting, the government has turned a blind eye toward them and is protecting the culprits.”

Backing Markam’s claim, Shukla said, “The SC decision has left a decisive impact on BJP’s tribal vote bank and tribals have started seeing the BJP as an anti-tribal party. Evidently, this has benefited the Congress.”

Recently, tribal voters of Madhya Pradesh held a massive rally in Burhanpur district of the state demanding that the Forest Rights Act, 2006 (FRA) be upheld and the withdrawal of the proposed amendment in Indian Forests Act, 1927 by the BJP-led NDA government at the Centre.

According to political analyst Jairam Shukla, “Earlier, it was generally assumed that increase in voting means vote against the incumbent government and less voting meant apathy of voters towards election. But, it’s no longer true. The increase in voting doesn’t necessarily mean that people have voted against Modi or BJP.

In fact, it could be the other way round. I believe it is group of silent voters who have come out to assert their choice. I am pretty sure that BSP, which had a vote share of 17 to 23% in Rewa and Satna seats in Vindhya and Gwalior and Morena seats of Chambal-Gwalior region, has lost its votes to BJP in a big way, Shukla said.

“As the BSP leadership is weakening in those pockets, their committed voters too are shifting their votes not to the Congress, but the BJP. We saw it in the assembly polls and would see it again,” he added.

Meanwhile, senior journalist and author Rasheed Kidwai believes the massive turnout proves that the people of the state want change.

“A massive turnout is always a sign of change and high voting percentage suggests tribal voters want to usher in a change in the region,” said Kidwai.

Similarly, during the 2018 assembly elections, a massive turnout was reported in the Malwa region, a BJP bastion, after numerous farmers’ protests – and the BJP suffered a major blow there.

Congress state media vice-president Abhay Gupta opined that the voter turnout in the current elections have been high in states including Chhattisgarh, where the Congress is in power, especially in reserved seats, while in states like Bihar, where BJP and its allies are in power, voting has been low.

“To me, it’s a clear indication that people have voted for the Congress and party president Rahul Gandhi, which has formed government in MP, Chhattisgarh and Rajasthan only five months ago”, he said.

Countering Congress’ Abhya Gupta, the BJP chief spokesperson Deepak Vijayvargiya said, “There was a strong wave in favour of Narendra Modi in MP. People came out to vote in strength to ensure that results are not like the December 2018 state assembly election.”

During recent rallies, former chief minister Shivraj Singh Chouhan also claimed to the people that their one vote would make two governments – one at the Centre and the second in the state.