Hathras: The Truth is Shameful and Rahul Gandhi Did the Right Thing By Pointing it Out

As Indians we need to ask ourselves what it means to be human, and then have the honesty to admit that many of us consider Dalits, Muslims and Tribals to be beyond the pale. 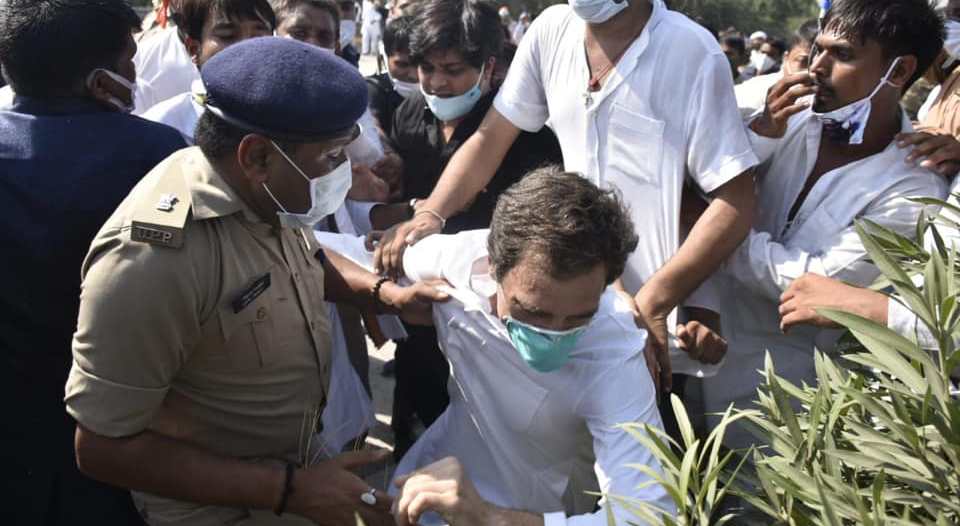 Rahul Gandhi being detained by the police on his way to Hathras on October 1. Photo: Special arrangement

Supporters and well-wishers of Rahul Gandhi are having another nightmare, this time because of a tweet by him. “The shameful truth is that many Indians don’t consider Dalits, Muslims, Tribals to be human,” is what he said. There was a context to it, which the next sentence made clear: “The CM & his police say no one was raped because for them, and many other Indians, she was NO ONE.”

It is evident that he was referring to the callous and cruel treatment meted out to the violated and dead young woman of Hathras. She was not merely a woman. She was a Dalit first. The respect and dignity that women in India are said to enjoy was not for her. She was merely a resource, as all Dalits are expected to be – a resource for energy, labour, national pride even. They can be used and destroyed.

Rahul Gandhi’s statement stood out for its clarity and bold truthfulness. To utter the word ‘Muslim’ and not use the camouflage of a safer word like ‘minorities’ is seen as courageous. Some feel it was too audacious.

Many who want to see Rahul Gandhi succeed banged their head after reading his tweet. He is destroying himself, they said. They admit there is much to be admired in his statement but feel that it is bad politics. It would have been better for him to say that ‘the Rashtriya Swayamsevak Sangh’ did not consider Dalits, Muslims and Adivasis to be human.

We know, however, that to blame the hatred and intolerance we see around us on the RSS alone is to be economical with the truth. And the truth is very simple. It is what Rahul Gandhi had articulated.

Another complaint I have heard is that politicians should not call the people bad as he or she needs their votes. These critics acknowledge that many if not most Hindus have indeed been swayed by majoritarian propaganda and forgotten their humanity. But rather than condemning them for their fall, the argument goes, they need to be brought back to their senses. By condemning them, Rahul Gandhi is placing himself on a higher pedestal than them and creating distance between himself and the masses. A statement like this angers the voters, pushes them in closer embrace with the RSS and BJP and alienates even those who are fence sitters.

Further, the argument goes, Rahul Gandhi is no social reformer. He is in the game of parliamentary politics and his job is to secure a majority of votes for his party. He should focus on that. The votes have to come from the masses as they exist. If he wants to reform them, he should leave politics. He should have mercy on his party and not make it suffer for his spiritual satisfaction.

Ironically, this argument is very similar to what I had heard from Rahul Gandhi himself. The year was 2014 and there was a seminar to mark the 125th birth anniversary of Jawaharlal Nehru. Majoritarian ideology had decisively replaced the Gandhian-Nehurvian secular ideology. I was one of the many who spoke on Nehru and his ideology, and while doing so we severely criticised the Congress party for having digressed from the Gandhian path and losing the Nehruvian resolve to stay the course of secularism.

Rahul Gandhi was in the front row. He rose to speak after all of us and said that he accepted the critique but the problem with people like him was that he was in the business of parliamentary politics and his task was to somehow get a popular mandate from the people! He did not have the luxury of critics like us who do not need the people’s support. Rahul said he was aware of his limitation as a politician. He knew that he was not in the field of ideas. It was a sad but honest admission.

But then, soon after, Rahul Gandhi went to Dadri to sympathise with the family of Akhlaq who was lynched by the forces of the popular mandate. Some of his party men disclosed that top functionaries of the Congress had disapproved of the visit. They felt it was bad optics for Rahul to be seen sharing the grief of a Muslim.

When I heard that, I remembered how Sonia Gandhi, then the president of the Congress and the most powerful person in the party, had not been able to gather courage to publicly mourn the killing in Ahmedabad in 2002 of her party leader Ehsan Jafri with his family. I was told that she was advised against this as it would have “alienated Hindu voters” from her.

I also remembered my visit to Dhule, a town in Maharashtra, which was hit by communal violence in 2013. Six Muslims had been killed. The Congress-NCP combine was in power. No Congress leader went to console the family members of the dead. I was told that they had come but met the elders of the Muslim community in a guest house with a cheque as support to the families from the party. Elections were around the corner and they could not make it public as it would have invited a Hindu backlash. Muslims were expected to understand. They proved to be reasonable. I was informed later that Sonia Gandhi had also met with the Jafri family privately. The Congress people felt that it was bad to make a public spectacle of it.

After Dadri came 2016, when the students of Jawaharlal Nehru University were attacked and arrested. The government and media went after Kanhaiya Kumar, Umar Khalid, Anirban, Naga. Rahul Gandhi again went to JNU to express his solidarity with the embattled university and students. This visit also led to a lot of chest beating in the party. A Congress leader told me that gloom had enveloped the party.

Rahul Gandhi had committed a blunder by associating with the student activists, some senior leaders felt. They had already been portrayed as the ‘tukde tukde gang’ – who stood for India’s destruction – and to be seen in their company was supreme folly. Senior Congress leaders felt that if he continued on this path, the party was definitely doomed.

So, these people heaved a sigh of relief when Rahul Gandhi started making the rounds of Hindu temples. He was claiming Hinduness and this would help blunt the propaganda that the party was anti-Hindu and pro Muslim, they felt.

Hindus are seen as mainstream and all others – mainly, Muslims, Dalits and Adivasis – are expected to mainstream themselves. And the way to do this is for Muslims to  follow Hindu ways, for Dalits to not disturb the natural social order and for Adivasis to sacrifice their livelihood and culture for ‘national interests’.

There should have been a massive outpouring of revulsion in response to the entire state machinery in Uttar Pradesh denying the charge of rape in the Hathras case and their attempt to lessen the violence done to her. Instead, many chose to believe the authorities and doubt the claims of the family of the deceased girl. They instead saw motivation in their insistence on pressing the charge of rape and violence. They accepted the canard that the family was given money by the opposition and those conspiring against the government. That is why the sense of outrage was rather limited.

Indian society is clearly divided. Those who see and describe themselves as upper caste are upset with the claims of the family. Talk privately and you would be told that much should not made out of a ‘small and isolated’ incident. Why bring caste into it? Are not women from upper castes also vulnerable? Those asking such questions also know the truth. It is a fact that village women from the “lower” castes are more prone to sexual violence. But many among the “upper” castes do not want to accept this.

Who is a human being in our times? Someone who has political agency. Someone who has the confidence of equal access to justice when wronged. Someone who can enter common spaces ungrudgingly, and is not told that this was a privilege bestowed on them. Someone who is not seen or treated as a beneficiary when accorded her legitimate rights.

A human being is not only an economic being. She is a cultural, political, national being. She should have confidence that she can participate in the national cultural life being what she is. If any of this does not apply to someone, this means she is not accepted as a human being by her fellow nationals.

This is what Rahul Gandhi was trying to say. But as Theodore Adorno once wrote, to talk of the noose in the house of the hanged is a crime. At the very least, it is considered bad manners to point to the unpalatable.

We have seen slow, sometimes invisible attempts by the Congress party to empathise with the Muslims and Dalits. It organised a signature campaign for the release of Dr. Kafeel Khan and has given him sanctuary in Rajasthan at its own cost. Its leaders went to the homes of those arrested for having participated in the anti CAA protests.

Is the latest statement by Rahul Gandhi anther step forward in this direction? We can only hope it is. We can also hope that Indians develop an empathetic and self-critical ability which leads them to introspect and bring a change in their outlook towards others.