Arora was the president of the Haryana unit of the INLD for more than 20 years. 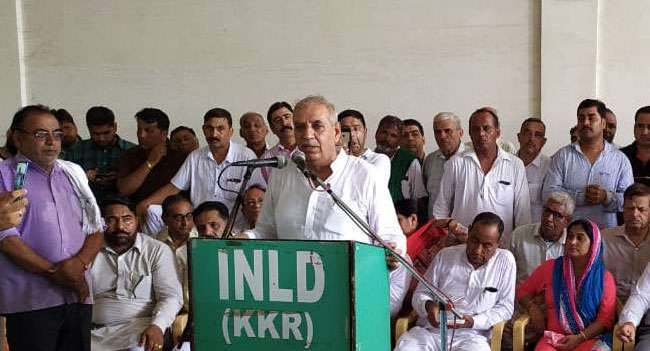 Kurukshetra: In a jolt to the Indian National Lok Dal (INLD), the vice president Ashok Arora, along with his supporters, resigned from the primary membership of the party on Tuesday.

With a political career of over 35 years, Arora was the president of the Haryana unit of the INLD for more than 20 years. He announced his decision to resign from the party at a meeting of his supporters and associates called ‘Punjabi Dharamsala’. Addressing the workers, Arora said that he was leaving the party with a heavy heart as INLD patriarch Om Prakash Chautala had given him love and affection equivalent to his two sons.

Arora said that the political circumstances forced him to take the decision. “In the present political scenario, regional parties do not have much role to play so joining a national party has become the need of the hour,” he said. He also said that he would meet Chautala and seek forgiveness for resigning from the party, and also ask for blessings for his future political career.

According to some reports, Arora may join the Congress. However, when questioned, Arora said that he would take the decision after assessing all aspects. He also said that he was not like politicians who first remained with Chautala, then with Congressmen Kuldeep Bishnoi and Bhupinder Singh Hooda, and finally joined the BJP.

According to political observers, if Arora joined any party other than the BJP, it would not only affect the results in assembly segments of Kurukshetra district but many constituencies in the state as he was considered a strong leader of the Punjabi community. The INLD has been going through rough times ever since the party split.

Arora was elected four times from Thanesar constituency. Besides being senior minster in Chautala’s cabinet, he was also the speaker of the Haryana Legislative Assembly.

The assembly polls in Haryana are slated for October this year.