Haryana Clamps Down on Protests Against the BJP Government

Opposition leaders have termed the move unconstitutional and draconian. 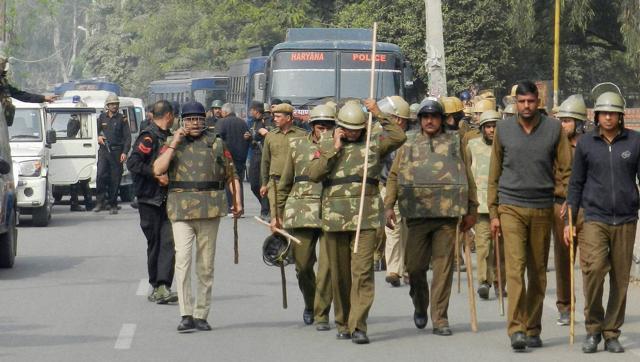 Haryana police, often in the news due to its inability to keep law and order on a tight leash and the outspoken nature of its officials, has come under the spotlight once again. In focus this time is a recent order from the Additional Director General Mohammad Akil, asking district police chiefs to maintain records of persons indulging in “illegal and anti-government activities’’.

In the order, Akil is reported to have said that all persons found indulging in such activities would become ineligible for recruitment to the police and the army. This move has received severe criticism from opposition parties.

The state unit of Communist Party of India (Marxist) has called the instructions “unconstitutional” and “blatantly draconian”, adding that the order amounted to an authoritarian directive from one of the most senior police officials in the state.

The party has urged Chief Minister Manohar Lal Khattar to withdraw the “illegal” directions issued by the ADGP and rein in the senior officials. It has also called upon police officers not to discharge their duties in accordance with this norm.

CPI(M) state secretariat member Inderjit Singh said this was not the first time a state police officer had exceeded his brief. He said Haryana DGP K.P. Singh’s recent statement was equally “provocative and anarchic”. Singh, who replaced Yashpal Singh as state police chief following widespread violence during the Jat agitation in February this year, was quoted as defending people’s right to kill in self defence.

“Common citizens are not aware that this (punishing criminals) is not a right the law gives only to policemen. If common citizens are witness to someone insulting a woman, indulging in acts of arson by burning someone’s property or trying to kill a person, then the law gives the right to the common man that he can take the life of the person indulging in such acts,” he had said at a seminar, evoking widespread criticism on the grounds that he was promoting violence.

Responding to the recent circular, Haryana Congress president Ashok Tanwar said it amounted to the violation of constitutional and democratic rights. The right to peaceful protest and demonstration is every citizen’s right, he said, so the coming of this order at a time when every section of society – be it farmers, traders or government servants – are on the streets protesting different issues is the same as muting their voice.

Questioning who is responsible for the situation, Tanwar said the BJP government holds responsibility because they did not fulfil their promises. Such a crackdown will not work, he said, as dialogue is needed to resolve the issues amicably.

“As for the Jat agitation, I believe that had they (the police and administration) been more serious last time and had they acted as per the need of the hour, the scale of damages and loss of life witnessed would not have happened. It also led to the loss of trust between communities. Though some of that has been restored, a lot more needs to be done. They now want to make people fearful so that they do not participate in protests or express themselves freely. Today they have done it here, tomorrow they will do it in other situations. It is a confused government and a confused government can do anything. Nowhere else in the country do you see such curtailment of the rights of the people,” the Congress leader said.