For How Long Will Haryana Pay the Price for BJP's Political Experiments?

The party has been riding the Dera tiger in order to secure its vote bank and is today showing spectacular ineptitude in dealing with the consequences. 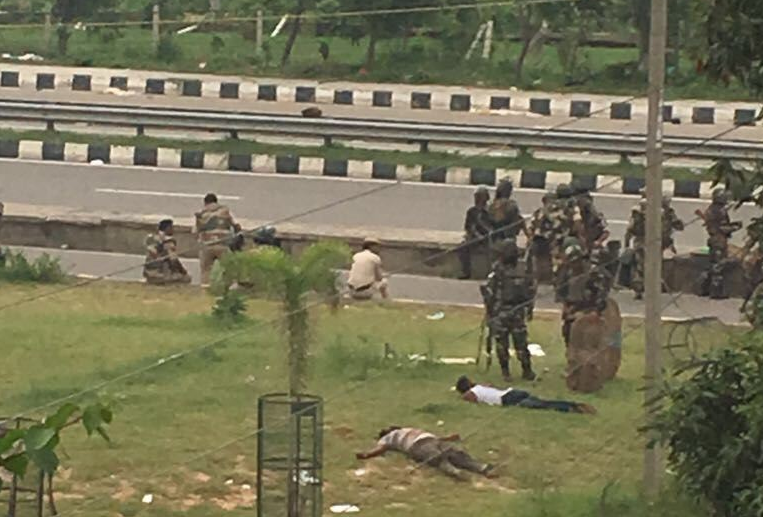 Presiding over the breakdown of  law and order, turning a blind eye to wilful arson by its support base and allowing goons to run amuck in the state seems to have become a routine occurrence with the Manohar Lal Khattar BJP government in Haryana. To have allowed the Sirsa-based Dera Sacha Sauda supporters to first lay siege and attack the ‘VIP town’ of Panchkula is one of the worst displays of deliberate apathy and official complicity by a government in recent times. As a horrified nation watched,  at least 30 people died, scores of vehicles were burnt and government property worth crores destroyed  in the violence. Yet it is no skin off the nose of the Manohar Lal Khattar government. The blame for the mob growing to the size it did has been pinned on a “clerical error” in the promulgation of the Section 144 notice and a scapegoat made of the Panchkula DCP who was obviously following orders from above.

By the evening of August 25,  the town looked like it was attacked by terrorists, its middle class population horrified at Khattar’s incompetence. They had, after all, voted overwhelmingly for the Bharatiya Janata Party in 2014. Residents cowered in fear in their houses as dera ‘premis’ entered residential neighbourhoods, burning private cars and breaking doors and windows. As a resident of Panchkula myself, for hours we worried for our safety as anarchy reigned and it became all too clear to us that the state’s law and order machinery had abandoned its citizens.

Where the state government failed, the Punjab and Haryana High Court stepped in to not only nudge the government into action, but also to issue stern directives that warned of consequences if it did not do its job. But it is plain as day that just like the Khattar government failed miserably to prevent mayhem during the 2016 Jat agitation, not learning any lessons from the breakdown of administrative machinery then,  Panchkula is a repeat. For days before Friday’s verdict convicting Gurmeet Ram Rahim Singh of rape, a complicit government watched the build-up of Dera supporters, their open threat of violence hanging in the air for all to see.

The diffident, inexperienced Khattar – who soft pedalled any action against the Jat reservationists during the Jat agitation in February 2016, allowing arsonists  to run amuck in eight districts, looting and burning and assaulting women – was out of his depth in handling the Dera too. In both cases, the triggers for the violence were unquestionably political.

To understand this, we need to go back to February 2016, when days after the Jat reservation violence the Haryana government appointed a three member committee headed by the well regarded retired IPS officer Prakash Singh, which went into acts of omission of commission by officers and others and also examined the triggers for the stir.

The committee concluded that while a highly politicised officialdom under Khattar abdicated its responsibility and failed to control the conflagration, the triggers for the confrontation were political. The “combustible atmosphere” was created by the inflammatory statements of BJP leaders like its MP from Kurukshetra, Raj Kumar Saini, who was openly challenging the Jats for a confrontation. It is common knowledge that the BJP came to power in Haryana in 2014 mainly on the strength of the non Jat votes and substantial support from the Dera Sacha Sauda. This still rankles with the powerful Jat community of Haryana which has an uneasy equation with the Khattar government. But when push came to shove and the Jats decided to show who really calls the shots in Haryana, Khattar and his government behaved like deer caught in the headlights of a truck. The committee report notes, “The state could not possibly complain of shortage of manpower. What was lacking was the will to act.”

The same lack of will to take preventive action against the Dera followers was visible in the last few days too. 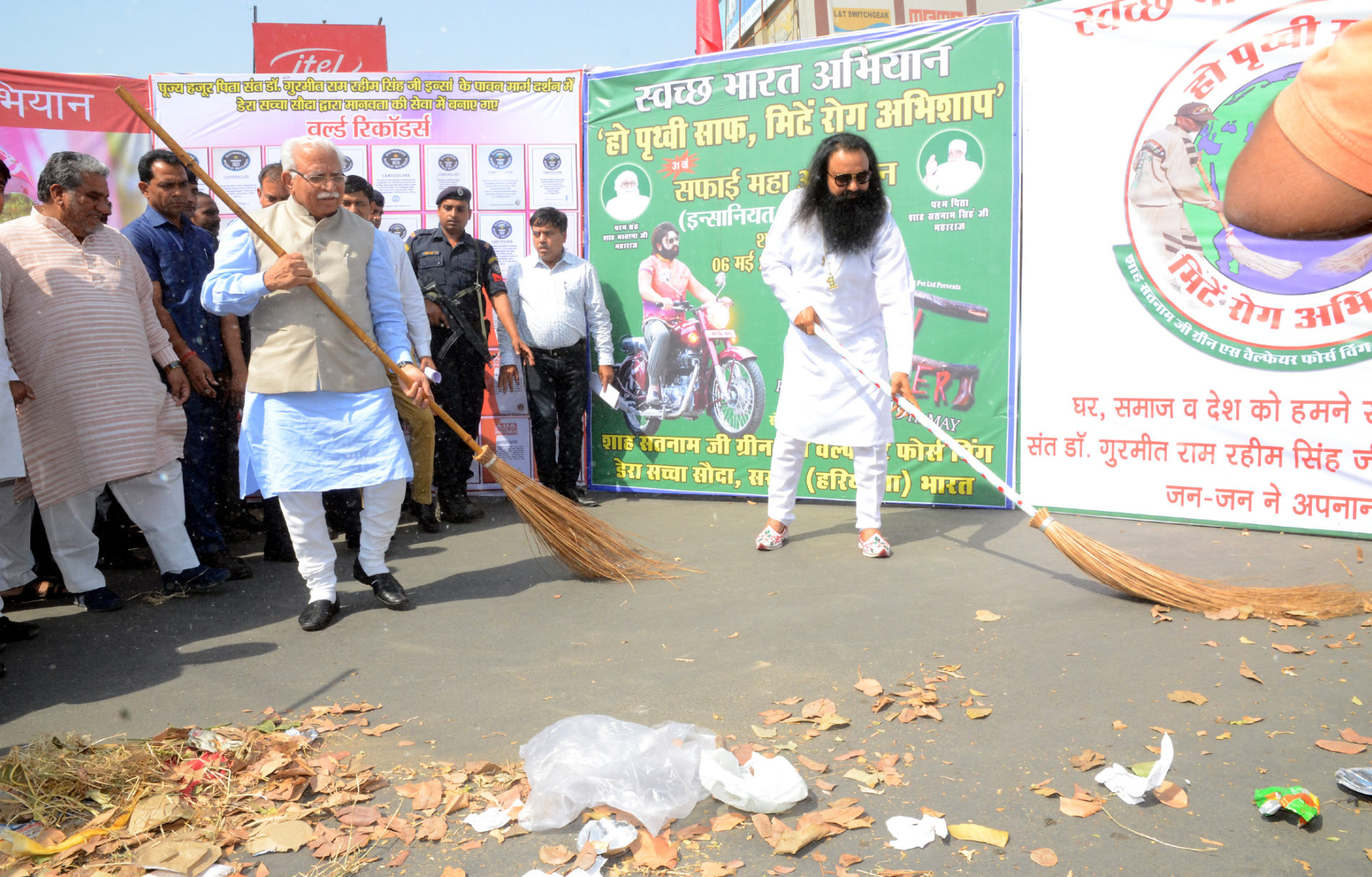 Khattar and his government are busy trotting out excuses that cracking down on the Dera supporters  before the judgment would have led to violence. No one is buying this excuse now. It was all too evident in the last few days that the thousands of people streaming into Panchkula, squatting on its green spaces and pavements were not just coming in unhindered, but were viewed with a benign eye by the state and ruling party.

This was evident from the statement of Haryana education minister Ram Bilas Sharma a couple of days ago, when he categorically said that the enforcement in Panchkula of Section 144 – which prevents the assembly of more than four persons – “does not apply to Dera premis… who are  driven by their faith and are peaceful people.” So if not for them, did the government impose Section 144 on the residents of Panchkula and Chandigarh?

The words of the Prakash Singh committee report about events last year could very well apply to Friday’s developments in Haryana too.  “At the state-level, suffice it to say that the picture was very dismal and showed deplorable lack of leadership at different levels… They were either unequal to the daunting situation they faced or they could not mobilise the full strength of the officers and men under their command, some of whom either went missing or deserted their duties.”

The other more worrying trend visible in both episodes is the manner in which a category of officials influenced by caste and their affiliation to the Dera did not enforce the law and allowed the arsonists a free run. If Jat officials were soft on the arsonists last year, this time many Dera sympathisers and supporters in the lower ranks of the police and administrative machinery in Haryana did not stop them from proceeding to Panchkula and Chandigarh. It was only when the Army and paramilitary forces took charge that some semblance of order was restored in Panchkula towards evening. The showpiece town with its beautiful parks and greenery, modelled on Chandigarh, had a rude introduction to anarchy as gun shots reverberated,  smoke billowed at several places and blood fell on its clean streets.

It is also quite obvious that the situation was being closely monitored by the Centre at every stage and that Khattar and his colleagues were getting their cues from there. Given that the understanding with Dera head Ram Rahim, now a convicted rapist, was crafted by the BJP’s top brass who continued to kowtow to him after their 2014 victory, it is safe to assume that instructions to be soft on the Dera supporters and allow Ram Rahim the luxury of displaying his might as he drove for the hearing from Sirsa to Panchkula in a 200 car strong cavalcade came from Khattar’s political masters in the BJP.

Those in the know in Haryana say that the elected representatives in the Khattar government are often found floundering and it is the bureaucracy which really runs the show.  It’s not surprising therefore that the “highly politicised” administrative machinery which was so severely indicted by the Prakash Singh committee report for letting down the citizens rubbished his report. The government which set up the committee also did not make the complete report public, and a sterling resource which pinpointed systemic and structural deficiencies and made concrete suggestions to prevent a recurrence of  such anarchy was wilfully ignored. The result is there for all to see.

Chander Suta Dogra is a senior journalist. She is also a spokesperson of the Aam Aadmi Party.