Jain monk and religious leader Tarun Sagar gave a 40-minute speech in the nude to the Haryana state assembly on Friday afternoon. 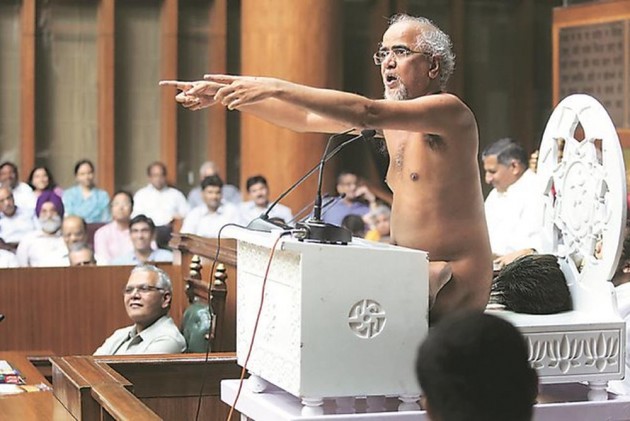 Delivering his “kadve vachan” in the nude, the monk addressed a range of topics. This was the first event of its kind in the Vidhan Sabha and marked the opening of the monsoon session, Indian Express reported. He was seated on a dais, above the seats of the governor, chief minister and MLAs.

Everybody in the assembly, including the opposition, seemed pleased with the monk’s presence, according to the Times of India report. The opposition Congress legislature party leader Kiran Choudhry and Indian National Lok Dal MLA Zakir Hussain were among those who greeted the monk on behalf of their MLAs. Chaudhary recited the opening lines of a bhajan – ‘Guruji ko kariye vandana’ – for him.

Politics must always follow dharma, the monk said, using the metaphor of a wife’s “duties” and “subservience” to her husband. “Rajniti par dharam ka ankush zaroori hai. Dharam pati hai, rajneeti patni. Har pati ki yeh duty hoti hai apni patni ko samrakshan de. Har patni ka dharam hota hai ki woh pati ke anushasan ko sweekar kare. Agar rajneeti par dharam ka ankush na ho toh woh magan-mast haathi ki tarah… ho jaati hai (The control of dharma over politics is essential. Dharma is the husband, politics is the wife. It is the duty of every husband to protect his wife. It is the duty of every wife to accept the discipline of her husband. If there is no control of dharma over politics, it will be like an elephant out of control),” Indian Express quoted him as saying.

Praising Prime Minister Narendra Modi’s ‘Beti Bachao Beti Padhao’ campaign, he added that he had come up with a solution to female foeticide that would tackle the “big problem” at the social, political and religious levels. “At the political level, the government should decide that those who do not have daughters should not have the right to contest Lok Sabha and Vidhan Sabha elections. At the level of society, people should not marry their daughters into families that do not have daughters. At the religious level, saints should decide that they will not accept alms from houses where there are no daughters. The result will exceed expectations if this formula is followed. We are living in the 21st century. Even today, when boys and girls are differentiated, I feel we are living in the 14th century,” he said, according to the Indian Express.