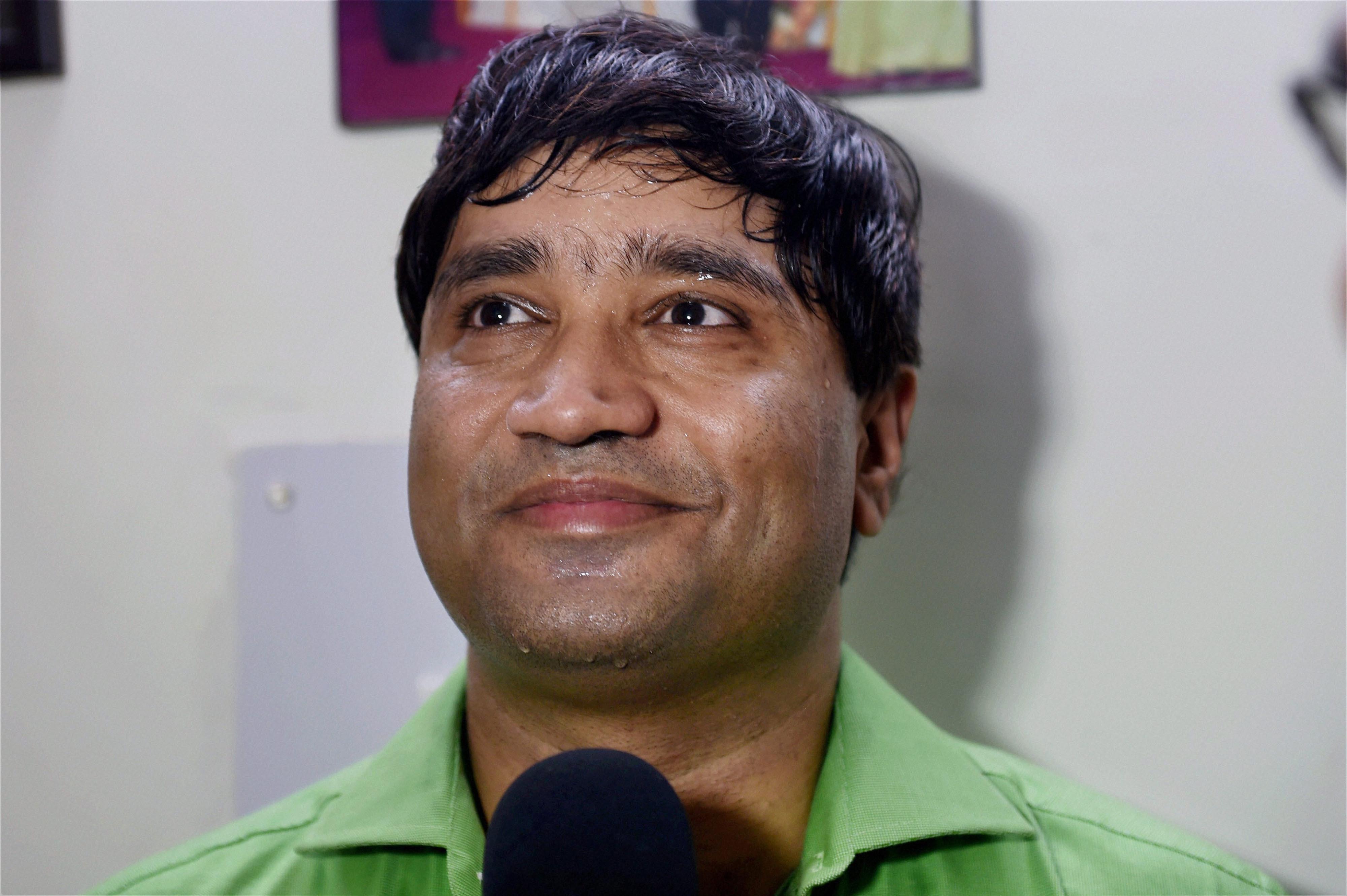 Bureaucrat Sanjiv Chaturvedi with his mother after getting news of his Magsaysay Award on Wednesday. Credit: Subhav Shukla, PTI

New Delhi: Whistleblower Sanjiv Chaturvedi, the Indian Forest Officer who took on the land mafia in Haryana and exposed scams running into crores of rupees at the capital’s All India Institute of Medical Sciences during his stint as Chief Vigilance Officer, has been awarded the prestigious Ramon Magsaysay Award in the ‘Emergent Leadership’ category.

Incidentally, Delhi Chief Minister Arvind Kejriwal, who had sought to appoint Chaturvedi to a job in the Delhi government in February, had also received the award in this category in 2006.

Chaturvedi has been awarded for “his exemplary integrity, courage and tenacity in uncompromisingly exposing and painstakingly exposing corruption in public office, and his resolute crafting of program and system improvements to ensure that the government honourably serves the people of India.” The other winner from India for 2015 is Anshu Gupta, founder of the NGO, Goonj.

Incidentally, Chaturvedi had recently taken on Union Health Minister J.P. Nadda for his unceremonious ouster from the post and then for forcibly trying to write his Annual Performance Appraisal Report which had “already attained finality with ‘outstanding’ grade” and Prime Minister Narendra Modi for deliberately stalling his request of change of cadre in violation of the established norms.

Speaking to The Wire, Chaturvedi said he has been told that the award would be presented in Manila on August 31.

So far, 48 Indians have been conferred the Magsaysay award – which is considered the Asian equivalent of the Nobel Prize – in six different categories. Chaturvedi is the fourth Indian to win the award in the category of “emergent leadership”.

Chaturvedi has been in the news of late for the manner in which he has taken on corruption at AIIMS and for the attempts by the NDA government to virtually keep him out of work.

In May, the Central Administrative Tribunal quashed an order of the Appointments Committee of the Cabinet (ACC) headed by Modi which declined Chaturvedi’s cadre change from Haryana to Uttarakhand.

Chaturvedi has also moved the CAT against orders of the Union Health Ministry and AIIMS which sought to nullify or tried to re-write his Annual Performance Appraisal Report for the period from April 1 to July 15 for which he claimed to have “already attained finality with ‘outstanding’ grade”.

“The instant order is solely aimed to finish the career of the applicant and to teach him a lesson for his lawful actions against powerful vested interests. Already the applicant has been rendered without any assignment by the respondents and his cadre transfer/deputation proposal to Uttarakhand and Delhi Government has been blocked illegally as part of this victimisation strategy and more and more such moves on the part of [the government] are in offing against the applicant,” Chaturvedi has submitted before the Tribunal.

Chaturvedi, who before being posted at AIIMS had been transferred 12 times in five years as he had alleged widespread corruption in the Haryana Government, had during his stint as CVO of AIIMS initiated action in a record number of cases. He managed to get penalties imposed in 78 cases (out of which, in 21 cases, the penalty of compulsory retirement/removal from the service was imposed) and chargesheet issued in 87.

As he was repeatedly targeted by the Haryana Government for taking on the corrupt, Chaturvedi had on at least four occasions found support from the President of India between 2008 and 2014. And when Chaturvedi had filed a criminal writ petition before the Supreme Court in 2012, it had also issued notices to the Central Bureau of Investigation to probe his charges of corruption against the then Congress Chief Minister and Forest Minister of Haryana, and senior state officials.

Earlier this month, the Central Information Commission had also slammed the Ministry of Environment and Forests, Chaturvedi’s parent ministry, for denying information under the RTI Act on how the officer was being harassed.

Dismissing the ministry’s argument that the information sought by RTI activist Subhash Chandra Agrawal was “personal”, Information Commissioner Madabhushi Sridhar held that “denial of information in this case is not legally correct.”

“The information sought is not at all personal information of Mr Chaturvedi,” he said, adding that it was only a “lame excuse” put forth by the Chief Public Information Officer, who if confident that it was private information, should have initiated the process of obtaining Chaturvedi’s views in the matter.

The Information Commissioner then held that “the request of appellant clearly pertains to the public activity of the public servant working at top level of Government and the matter relates to his performance of duty, leading to harassment from the embarrassed leaders in the political government, such as frequent transfers or being dumped in loop line with unimportant assignments etc.”

As such, he said, “the issue pertains to protecting the honest officers who are fearlessly performing their duties, inviting the wrath of political bosses, and fighting against corruption, as revealed by the news items referred in RTI application, and the disclosure of information will serve the public interest.”

In a democracy, Sridhar observed, “people have right to information about working of or obstruction to both the political executive and bureaucratic machinery” and so public interest will overweigh protection as ordained under various sections of the Right to Information Act.