Rana, along with his wife, MP Navneet Rana, had announced that they would recite the Hanuman Chalisa outside chief minister Uddhav Thackeray's house, accusing the Shiv Sena of deviating from the Hindutva ideology. 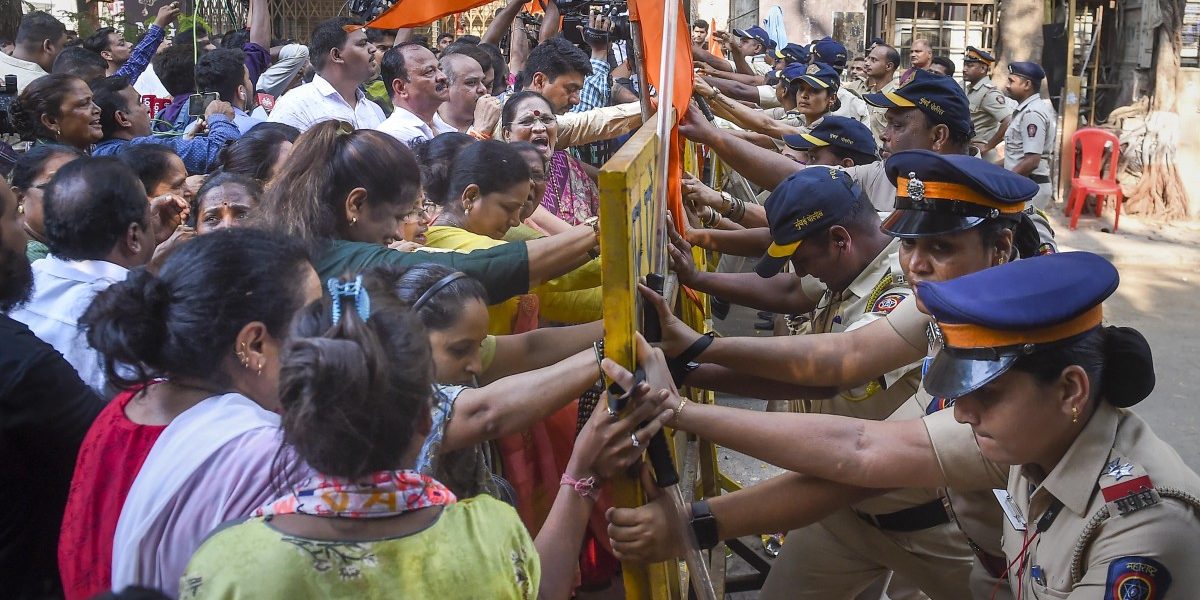 Shiv Sena workers break through police barricades set up outside MLA Ravi Rana and Navneet Kaurs residence, at Khar in Mumbai, Saturday, April 23, 2022. The couple said that they would recite Hanuman Chalisa outside Matoshree, the residence of Maharashtra Chief Minister Udhav Thackeray in Mumbai. Photo: PTI.

New Delhi: Tension prevailed on Saturday morning, April 23, in Mumbai’s Khar after Shiv Sena supporters broke through the barricades and tried to enter the residence of Maharashtra MLA Ravi Rana and his wife, MP Navneet Rana.

The legislator couple had earlier announced that they would recite the Hanuman Chalisa outside chief minister Uddhav Thackeray’s house, accusing the Shiv Sena of deviating from the Hindutva ideology practiced by its founder Bal Thackeray.

According to a police official, “Around 8.45 am, angry Shiv Sena supporters broke through the barricades, placed at a distance of around 50 metres from the building where the Ranas own a flat in Khar. They tried to enter the apartment premises. The party workers raised slogans in support of chief minister Thackeray and dared the couple to step out of the residence.”

But the situation was brought under control, an official said, adding that the police later asked the politician couple not to step out of their house as the situation may escalate due to the presence of a large number of Shiv Sena workers outside their building in suburban Khar.

“Around 10.15 am, senior police officers visited the residence of Ranas and told them that they should not step out of their home as a large number of Shiv Sena workers were gathered outside their apartment, which may lead to a law and order problem,” the official said.

On the other hand, Shiv Sena workers were also seen camping outside ‘Matoshree’, the personal residence of Uddhav Thackeray, since Friday morning, with many of them staying put there overnight. Besides ‘Matoshree’, the police have also increased security at ‘Varsha’, Thackeray’s official residence in South Mumbai.

Taking an aggressive stand, the party leaders and workers said they would not let the legislator couple go back without ‘prasad‘ “if they dared to turn up”. On Friday, Mumbai police had served a notice to the couple, asking them not to disturb the law and order situation in the city.

Ravi Rana had earlier told reporters here that he had demanded the chief minister read Hanuman Chalisa on Hanuman Jayanti “to rid Maharashtra of crises and attain peace for the state,” but Thackeray had “refused” to do so.

Accusing the Shiv Sena of deviating from the Hindutva ideology, Ravi Rana, according to NDTV, said, “This is not the same Shiv Sena that Balasaheb Thackeray formed. That Shiv Sena would have allowed us to chant Hanuman Chalisa.”

Shiv Sena leader and Mumbai former mayor Kishori Pednekar said, “We have accepted the challenge of the Rana couple. Let them come, we are ready to welcome them and give them ‘prasad’.”

The Shiv Sena has accused the BJP of hatching a conspiracy to harass the Sena-led coalition government in the state and using the Ranas and Maharashtra Navnirman Sena (MNS) chief Raj Thackeray as “pawns”.

“They (MLA Ravi Rana and MP Navneet Rana) have challenged the law and order situation. They were prompted to do this by someone. Shiv Sena workers are here to protect ‘Matoshree’,” NDTV quoted Shiv Sena MP Anil Desai as saying.

Maharashtra home minister Dilip Walse Patil also hit out at the couple, saying that their attempt to recite Hanuman Chalisa outside ‘Matoshree’ was part of a conspiracy to disturb the law and order situation in the state.

“Amravati MP Navneet Rana and her husband Ravi Rana want to tarnish the state government’s image and spoil the atmosphere. What’s the need to chant Hanuman Chalisa outside ‘Matoshree’. They can do it at their home,” Patil was quoted as saying by NDTV.

Speaking to reporters, Shiv Sena MP Anil Desai said, “‘Matoshree’ is a temple for Shiv Sainiks. Hindutva is in Shiv Sena’s blood, nobody should teach us Hindutva. People are aware of the work done during the pandemic by CM Uddhav Thackeray-led Maha Vikas Aghadi (MVA) government.”