As political tides take a new turn every day, the BJP seems to be in an uncomfortable position in the state it has ruled for two decades. 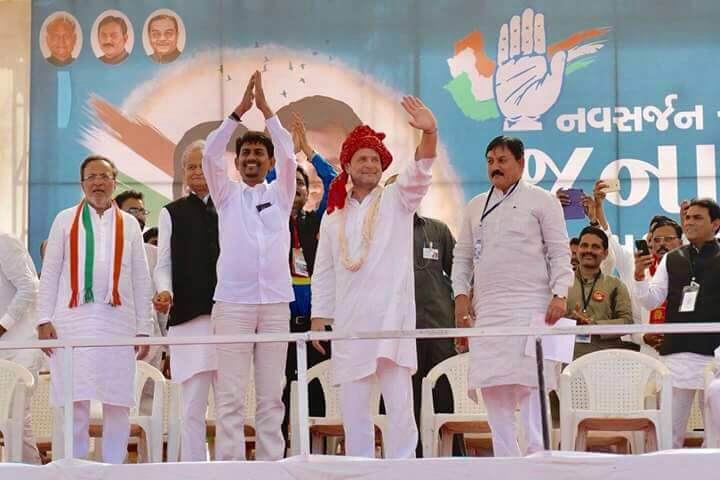 Victory is certain, the Gujarat elections shall be about winning 150 seats, Bharatiya Janata Party chief Amit Shah had said, addressing a rally in Junagarh in June this year. However, as the elections near, this target no longer seems easy for the BJP to achieve. As political tides take a new turn every day, the BJP seems to be in an uncomfortable position in the state it has ruled for two decades.

In mid-October this year, Dalit leader Jignesh Mevani, Patidar Anamat Andolan Samiti (PAAS) leader Hardik Patel, and OBC leader Alpesh Thakor, appeared together for an interview for the first time in a programme organised by a national channel. The three youth leaders took the platform to declare an ‘anti-right wing’ front. Mevani claimed that the three of them could together make a dent in 120 out of the 182 assembly seats. The trio later found itself in the midst of the BJP-Congress face off in poll-bound Gujarat.

Even as speculations were ripe about the new-found caste polemics of a Dalit, OBC and Patidar leader, and the vote share conundrum, Reshma Patel and Varun Patel – key aides of Hardik Patel – quit PAAS to join BJP on October 21.

Reshma Patel and Varun Patel were among the prominent faces of PAAS. Noticeably, Reshma Patel has shared the stage with Mevani and student leader Kanhaiya Kumar, in a public meeting in Mehsana, during Azadi Kooch in July this year, and was also detained along with other activists.

The news that the duo were joining BJP came hours within Alpesh Thakor declaring that he will join Congress on October 23. Mevani however, maintained that he shall not join any political party. 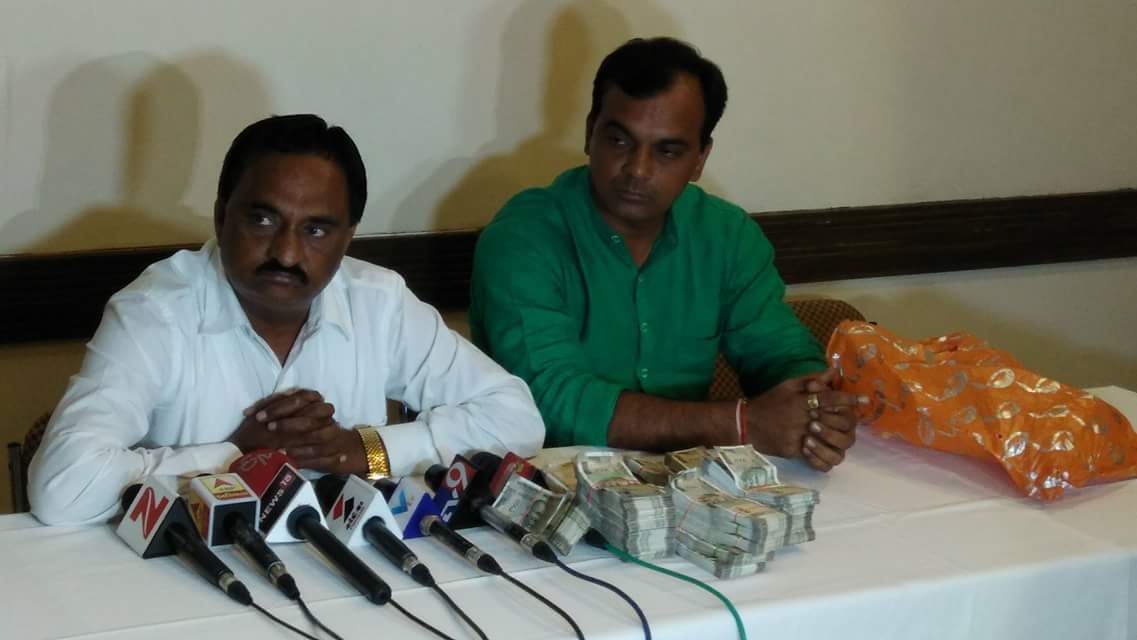 Just a few hours after Reshma Patel and Varun Patel had joined the BJP, Narendra Patel, a senior patidar leader from North Gujarat and co-convener of PAAS – who had also joined the BJP – quit. In a dramatic move, Narendra Patel called a late night press conference on October 22, and claimed that the BJP had offered him Rs 1 crore to join the party, displaying bundles of notes before the media.

“I enacted a drama to join BJP only to expose them. BJP is hoping to damage control in patidar dominated belt after defection of Varun Patel and Reshma Patel ahead of polls,” Narendra Patel told the media.

Following this, Bharat Pandya, Gujarat BJP spokesperson completely dismissed Narendra Patel’s claim. However, even before the party could overcome the shock of the episode, fresh trouble emerged. Nikhil Savani, the face of the patidar agitation in Surat, who had joined BJP, quit the party. Savani had joined the BJP with 150 former members of PAAS on September 26 this year. 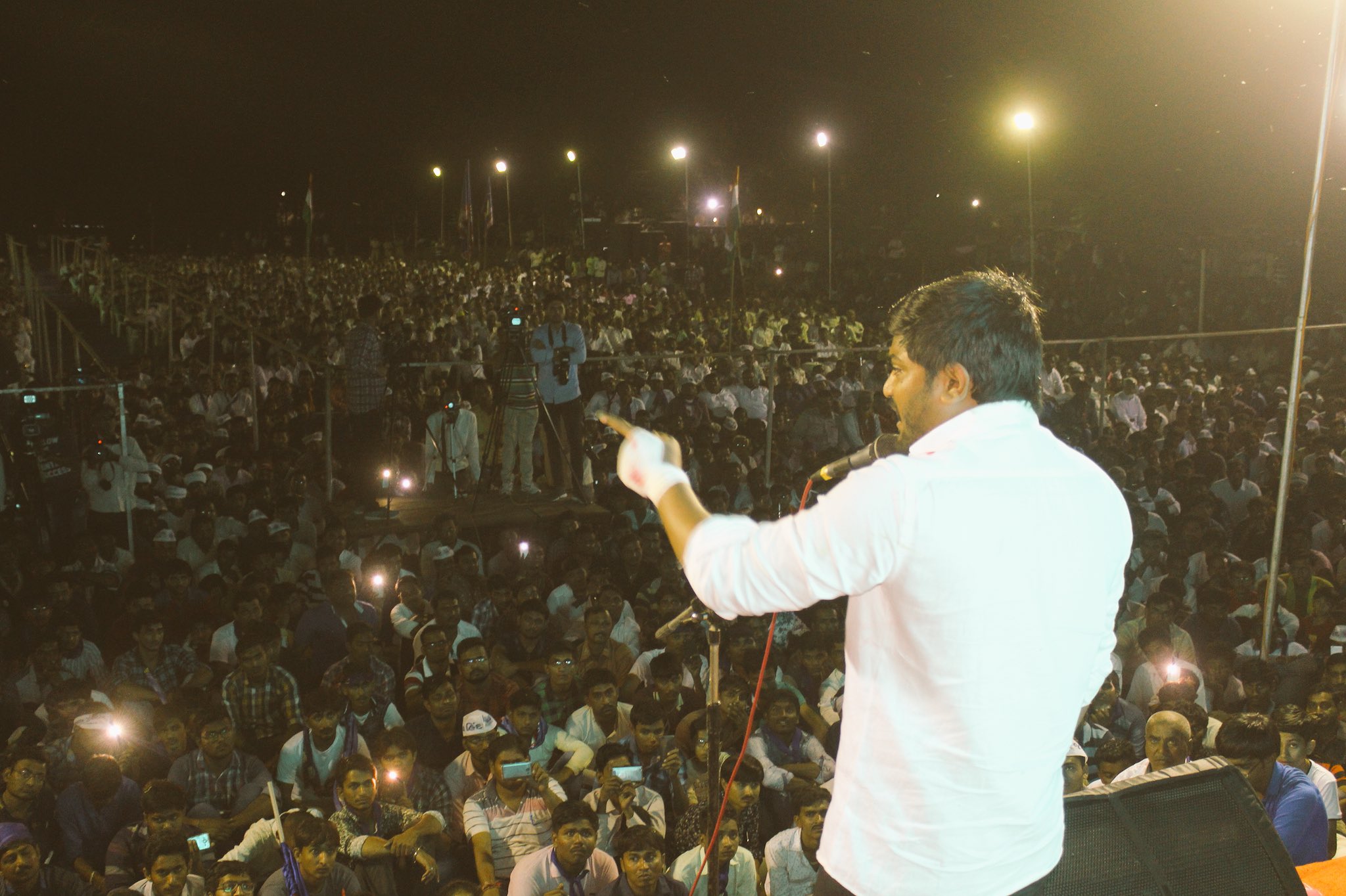 Unfazed by the actions of his aides, Hardik Patel took to twitter to announce, “The centipede shall continue to run even if some of his legs break. People are with me and I shall continue to fight for them.” Soon after, the PAAS leader announced a series of sabhas, between October 22 and October 31, in districts including in Ahmedabad, Bhavnagar, Morbi, Vadodara, Jamnagar and Amreli. 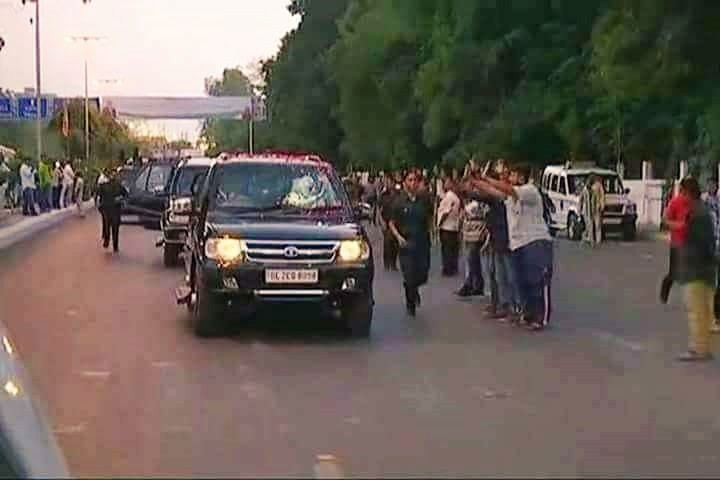 Meanwhile, amidst the high voltage political scenario, Prime Minister Narendra Modi visited the state on October 23 for the third time this month. However, not only did his roadshow see empty streets, the prime minister also had to face the wrath of Accredited Social Health Activists or ASHA workers, who had been agitating in Vadodara for months. Chandrika Solanki, the president of the Fixed Salary Struggle Committee, threw half a dozen bangles at the cavalcade of the prime minister. Following this, Solanki along with 200 other ASHA workers, were detained till Modi left the city.

“We had gone on hunger strike as well but the government has constantly been insensitive towards us,” Solanki said to media after the incident.

Noticeably, the ASHA workers had gheraoed Satish Patel, a BJP MLA from Karjan, on October 10, and chased him till he reached his waiting car. The incident had happened on the day Congress vice president Rahul Gandhi’s Navsarjan yatra had reached Karjan, where he had addressed the ASHA workers later. 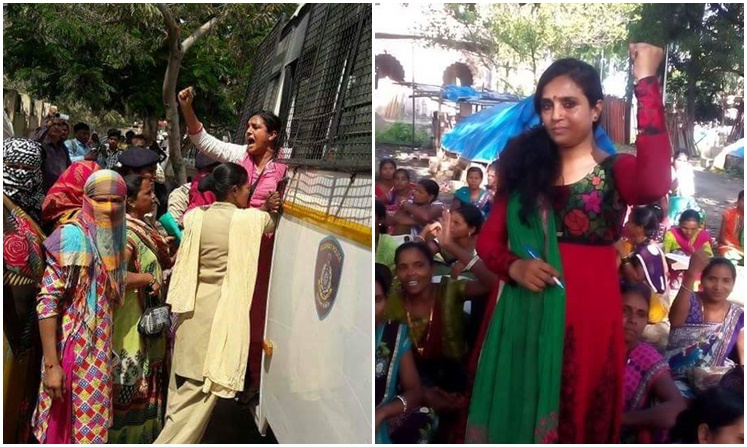 “Everybody is protesting. The youth, that is the population of Gujarat above age of 35 years, are disillusioned. The jobs that were promised have not been created, small and medium industries are badly affected by demonetisation and the poor implementation of GST, and agrarian crisis also prevails to add to that,” Ahmedabad-based veteran political analyst Achyut Yagnik says.

“Dalits comprise of 7% of the population of Gujarat, but in pockets like Eastern Ahmedabad and Surendranagar, where they are concentrated, one cannot go by the same calculation. Patidars, who form about 13%, will affect North Gujarat and South Gujarat. Thakors comprise of about half the OBC population who are concentrated in North Gujarat. Alpesh Thakor’s influence is likely to affect poling there. There are tribals too, in the Eastern Gujarat belt, who form 15% of the population, whom BJP have been trying to woo, as it is one of their weak bastions. To sum up, it currently seems like the BJP and the Congress will be neck-and-neck and in all likelihood, the BJP shall be limited within 80 seats,” said Yagnik.

Thakor had emerged as an OBC leader in his own right when he led a campaign against liquor addiction in North Gujarat in 2016. The 40-year-old OBC leader is son of a Congress leader, Khodabhai Patel, and hails from Endla village in Mandal taluka of Ahmedabad district. Six years ago, he had floated the Kshatriya Thakor Sena, which has over seven lakh registered members today. Later, he floated the OBC, ST, SC Ekta Manch (OSS), and claims these communities under one umbrella would comprise about 70% of the electoral population of Gujarat. 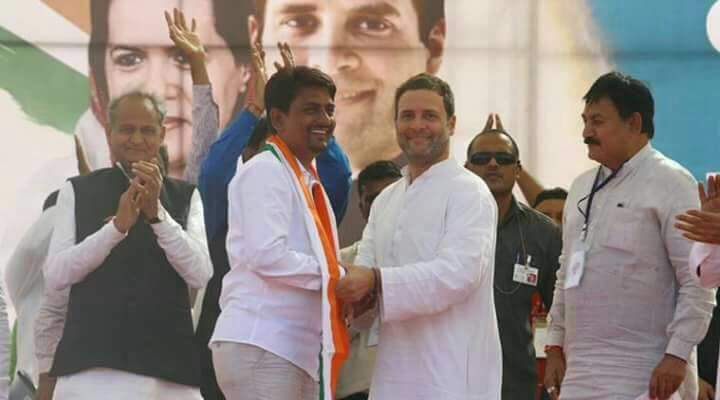 In the 2012 assembly election, the Congress had won 17 seats in North Gujarat and the BJP had managed to grab 15. However, a factor for the performance of the Congress was Shankarsinh Vaghela, the heavyweight politician who holds a strong sway in at least a dozen constituencies in the region. Vaghela, who dumped the Congress in July this year, has floated a new party Jan Vikalp, and will likely contest from North and Central Gujarat. The last time Vaghela formed a third front was in 1996 when he walked out of the BJP. His then new party, Rashtriya Janata Party, had managed to secure about 12% votes in the election of 1998. 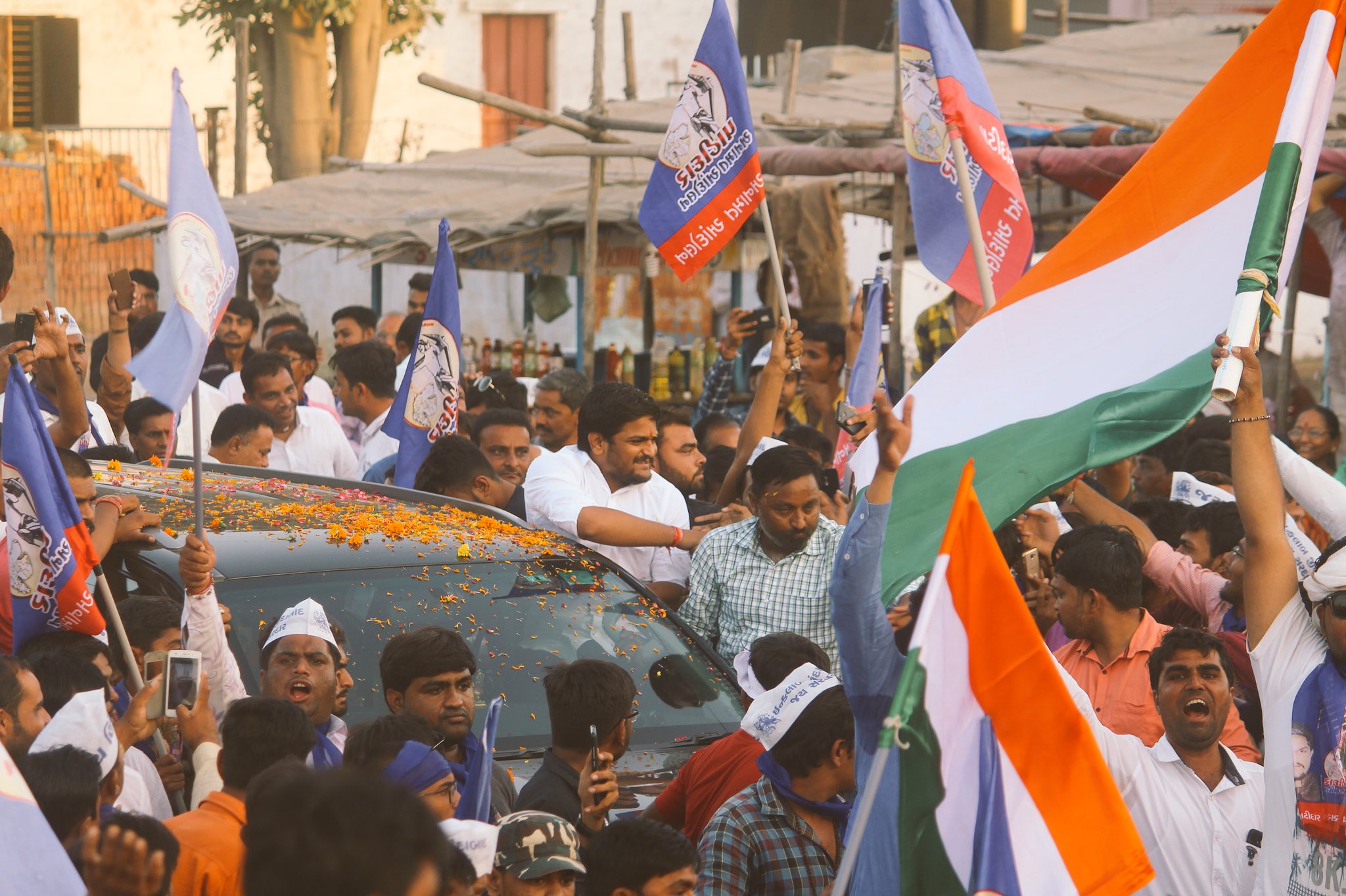 Born in Chandan Nagari village, Viramgam, to Bharat Patel, a former BJP worker, Hardik Patel shot to fame at the age of 22 after he lead the Patidar Anamat Andolan (patidar reservation movement) in 2015. The then Gujarat chief minsiter Anandiben Patel failed to handle the agitating Patels and unleashed massive forces on the youths of the community, resulting in killing of ten Patidar youths. Hardik Patel received unprecedented support of the Patels in both North and South Gujarat. Kadva and Leuva Patels (sub-castes) were consolidated under one banner in his support.

Patels are an influential community of the state, and has been a loyal vote bank of the BJP since 1984-85. The diamond and textile traders, who mostly belong to Patel community, have always supported the BJP. Even though the Patidar agitation had impacted local body polls and civic polls in Surat, that has 16 assembly seats, and Mehsana, that has 7 seats, the Patel leader has not yet openly come out in support of the Congress.

Dalits form 7% of the electoral population of Gujarat, which reduces their electoral clout. A year ago, when seven dalit youths were flogged, Mevani had lead an unprecedented march from Ahmedabad to Una, an event that made him the leader he is today.

The Dalit community have found a voice they never had, post the Asmita yatra, but the history of electoral politics show BJP has won election sans the support of Dalits in Gujarat. Besides, Mayawati’s Bahujan Samaj Party also fields candidates in constituencies that have high Dalit concentration, thereby dividing Dalit votes.

Mevani has however made it clear that he himself shall not join the Congress, but will aim to bring the BJP down. Noticeably, of the 13 seats reserved for SCs, the BJP had won 10 and Congress three, in the last assembly election.