The Modi Juggernaut Has Been Halted

The less-than-impressive show in Gujarat indicates that the BJP is no longer invincible and that the opposition is very much in the game. 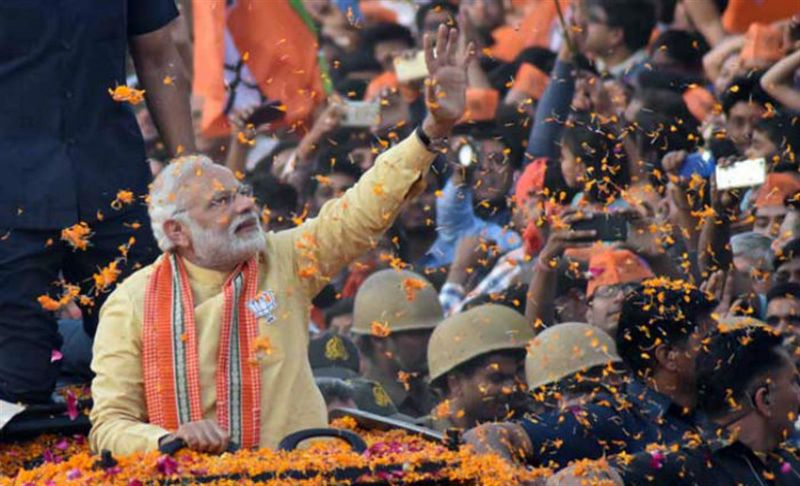 The BJP has won in Gujarat, but its seat majority is the lowest in the 22 years of saffron dominance in the state. Although it has increased its vote share relative to 2012, there’s little doubt that it has suffered a setback, while the loser has gone down fighting valiantly. Even in victory, Prime Minister Narendra Modi cannot miss the palpable social discontent in his home state. The crisis in education, rising joblessness, slowdown in manufacturing and the agrarian crisis have morphed into concrete anger against the BJP. This discontent, however, could not create a large enough momentum to unseat the party.

The Congress under Rahul Gandhi’s leadership mounted a formidable campaign which forced Modi (who is forever in election mode) to work harder, giving speech after stump speech. Modi addressed more rallies in Gujarat than he did in UP and Bihar; in the second phase from November 27-December 11, he addressed 34 rallies. The aggressive campaigning paid off in the end as he managed to pull his party back from the brink. The BJP was also saved by its strong urban vote base; rich and urban middle classes voted for it in the big cities of Ahmedabad, Vadodara and Surat.

The Congress lost despite a spirited and admirable campaign in the last three months, but it actually came close to beating the BJP. It built an imaginative coalition of different castes by roping in young Patel, Dalit and OBC (Other Backward Classes) leaders on its side. But at the end, Modi ensured that these caste groupings were subsumed within the Hindu fold by giving communal overtones to the campaign framed in an ideology and framework of rising above caste. Even so, caste alliances helped the Congress swing the vote towards the party in the Saurashtra region, and in the end only 20 seats separated the two parties.

Tried and tested narrative of Hindutva

After flirting with social coalitions and caste alliances all through the campaign, Gujarat came back to the politics of Hindu nationalism. New caste-based solidarities struggled to make headway as religious polarisation dominated the campaign in the second phase. Caste and class were both trumped. The disappearance of the ‘Gujarat model’ from the BJP campaign was the strongest indication of the big picture. Gujarat model was the centre piece of the BJP’s 2014 campaign, where it was sold to the rest of India as the model for development. That model was turned on its head in this election. Modi, who talks incessantly about vikas, did not run on the record of his government at the Centre or the state; he suddenly remembered vikas after the declaration of election results.

Also read: Mani Shankar Aiyar Is Only the Latest Victim of BJP’s Storm in a Teacup Tactic

Notwithstanding what BJP leaders might say, elections were fought not on the performance of the ruling party but on all types of manufactured distortions and controversies, including an indiscreet remark by Mani Shankar Aiyar which was immediately seized upon, misrepresented and declared as an insult to the 6.2 crore Gujaratis. In 2017, economic performance was not the principal narrative, instead, the BJP chose to build a narrative on the rhetoric of polarisation. There was no shortage of such rhetoric in previous Gujarat elections but this time, the prime minister himself led the charge.

Modi took off from where he finished his campaign in UP. To shamshan and kabristan (in UP) he added Pakistan (in Gujarat). The BJP resorted to fear mongering, insisting that if the Congress comes back to power, Muslims will take revenge for the 2002 pogrom. This was an irrational and unfounded fear as two decades of BJP dominance has rendered Muslims politically invisible, permanently marginalised and unrepresented in Gujarat.

For its part, the Congress steered clear of raising issues concerning Muslim voters because it didn’t want to provide the BJP an opportunity to polarise and undo its attempt to shake off the charge of a pro-Muslim party. However, this did not stop a BJP activist who was heard saying that: “The Muslims are waiting to take revenge against the Hindus for the 2002 Gujarat riots. In the Congress government, they are hoping they would have a chance to get back at us. If the Congress comes to power, the Muslims will be back to their hooligan ways. Our (Hindu) women will not be safe.” This fear mongering was reinforced by communal videos; for example, a widely-circulated video shows a young woman rushing home to safety against the sound of an azaan from a mosque in the neighbourhood.

On balance, Modi outmanoeuvred the Congress in the second phase of the campaign. During the second phase of polling, Modi stepped up the divisive rhetoric to claim, quite bizarrely, that Pakistan was trying to topple the BJP in Gujarat (and by extension, himself). He asserted without any proof that some retired army official of Pakistan was lobbying to make Ahmed Patel the chief minister of Gujarat if the Congress wins. What is more, he picked on only the obvious Muslim names from the list of invitees at Aiyar’s famous dinner meeting, besides Manmohan Singh, claiming that they were part of a plot to influence the Gujarat election.

Post-truth peppered with falsehoods, charges of treason and discrediting and defaming the Congress party formed the core of the campaign in the second phase which gave an edge to the BJP just when it seemed the Congress was winning. Shreyas Sardesai and Sanjay Kumar’s post-poll analysis in The Hindu clearly shows that a “last-minute swing by some Hindu voters towards the final stages of the campaign ended up giving the edge to the BJP”.

Modi’s campaigning, which was for the most part controversial and divisive, played a crucial role in turning a section of voters towards the BJP. Most of his speeches, especially the ones made at rallies post December 5, focussed on divisive themes – which led to a consolidation of Hindu votes behind the party, especially in assembly seats where the Muslim population is much higher than average. Thus, a seemingly close election was turned around in a short span of time by appealing to the majoritarian impulses of voters in the last leg of the campaign. By doing so, the BJP deflected attention from the two most significant issues – a worsening agrarian crisis and unemployment. Of the 89 seats that voted in the first phase, BJP won 48 and the Congress 38 seats. In the second phase, the BJP won 51 of the 93 seats with the Congress winning 39 seats.

After Gujarat, the 2019 general elections are no longer a foregone conclusion. The Modi juggernaut has been halted, this is evident from the decline in the seats his party has won in Gujarat. The BJP got 51 seats less than Amit Shah’s boastful claims of winning 150. The less-than-impressive show in the Gujarat elections indicates that the BJP is not invincible. At the same time, going forward, it is clear that polarisation in the face of economic discontent is the BJP’s diversionary weapon of choice. There is very little the Modi government can do over the next 15 months to address social disaffection and economic disenchantment which requires creating jobs – a premise it is unlikely to fulfil. But as was seen in this election, whenever Modi is under pressure –as he was in the first phase which seemed to have gone in favour of the Congress – he turns to proactively stoking a fierce communalism that demonises Muslims, panders to the worst prejudices and resentments of the Hindus in a bid to polarise and construct a political majority.

Modi’s plan for 2019 will remain the same: communal divide through the demonising of Muslims will form the bedrock of Hindu consolidation and mobilisation, as was done in the Gujarat assembly elections.

The increase in the number of seats won by the Congress, and the fall in the BJP’s, provides a template that the Congress can use in 2018 assembly elections, leading into 2019. But it also holds certain lessons for the party. The creation of a broad-based anti-BJP platform which included social movements in Gujarat turned the contest into a straight fight with its principal rival, the BJP. In the event, the Congress was able to shake a party that had not lost an election in Gujarat for 22 years. Gujarat has given the Congress and Rahul a much-needed breather. Let’s see how this plays out in the coming months.