Action was taken against Usman Khan after the Govansh Suraksha Abhiyan "recovered" skulls and filed a complaint. 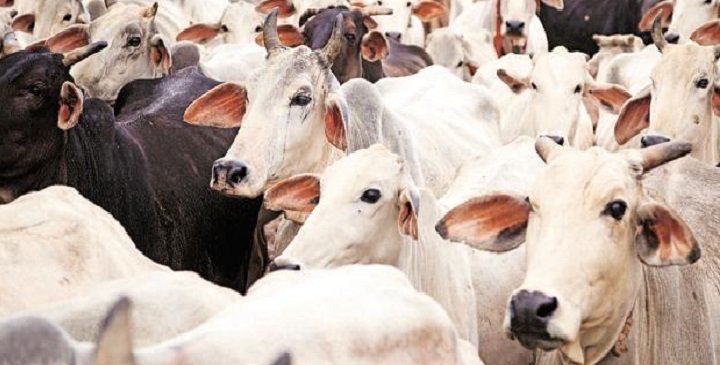 New Delhi: A man was arrested for cow slaughter in Goa last week. Usman Khan, accused of illegal cow slaughter on Eid al-Adha, was arrested from Valpoi in North Goa on Friday. According to the police, Khan slaughtered 19 cows and buried the skulls of the bovine in a pit. Herald Goa reported on Sunday that the judicial magistrate has rejected the bail application of Khan. According to the report, action was taken after a complaint was filed by the Govansh Suraksha Abhiyan (GSA), which “recovered” the skulls near a cashew factory.

Goa has been facing a shortage of beef since last year which continued ahead of Eid this year as well. Various news reports suggest that this is because the state’s sole legal abattoir, the Goa Meat Complex Limited (GMCL), hasn’t been able to get enough meat – which is imported from Karnataka – because of cow vigilantes. Organisations that claim to work against illegal slaughter of cows have recently sprung up across the country, including Goa. Vehicles carrying beef are often stopped at the Goa-Karnataka border and cow vigilantes throw phenyl on the meat, making it unfit for consumption, claiming that the animals were illegally slaughtered.

Goa has a significant beef-eating population and the state is also a popular destination for tourists, many of whom eat beef. After the beef ban in Maharashtra, Karnataka is the only source of meat for the state.

GSA is led by Hanumant Parab, a right-wing activist who believes cows need to be saved in order to establish a Hindu Rashtra and has been petitioning authorities for many years to ban cattle slaughter. Parab calls it a malpractice done by ‘a particular community’.

In 2014, Goa governor Mridula Sinha visited the Jai Sriram Gosanvardhan Kendra (JSGK) in Valpoi and performed a Go Pooja (cow worship) and also adopted a cow from there to be transported to the cow shed she had gotten up in the Raj Bhavan premises. JSGK is headed by Parab.

According to a report in Scroll, Parab once told reporters that his outfit “did not have any faith in the government machinery and wanted to check the documents of beef traders themselves”. The report also details ‘years of harassment’ of beef traders by gau rakshaks who have released or impounded scores of cattle and destroyed hundreds of kilos of beef in recent years, even leading to a strike by traders.

The situation reached a point where slaughter houses in Karnataka refused to supply meat to Goa till the government took steps to stop harassment by cow vigilante groups.

A report by Goa-based journalist Pamela in The Caravan argues that this is not new to the state and was initially started as a campaign by animal welfare non-governmental organisations. Through multiple interviews with members of animal welfare NGOs and meat traders, along with examination of various legislations, she details how the state’s food politics has been simmering for a long time and served as a saffron laboratory.