The BJP may want to examine the source of the growing anxiety among non-Hindus in the light of the prime minister call to win over minorities.

The outcome of the willful polarisation in this election was most starkly apparent in Goa. Only the consolidation of the Catholic vote prevented the BJP from making a clean sweep of the electoral stakes, though its government rules in the state.

With fewer than 11 lakh voters, India’s smallest state has just two Lok Sabha seats. The BJP retained the North Goa seat but lost to the Congress in South Goa, where voting figures reveal deep unease about another five years under Narendra Modi.

Goa’s Christians account for a quarter of the state’s population. Their numbers have been shrinking due to a migrant influx and the community’s accelerated flight to pastures abroad. But in pockets where they have a strong presence, a consolidation of their vote can sway the outcome, as it did in South Goa. Here, Congress veteran Francisco Sardinha defeated the BJP’s outgoing MP Narendra Sawaikar.

Despite the Aam Aadmi Party snapping at its heels, 60% of the Congress’s vote in this seat came from 10 assembly constituencies (out of a total of 20) where the huge turnout of minorities gave it significant leads over the BJP. These 10 constituencies alone gave the Congress a cumulative lead of over 52,000 votes against the BJP.

Considered a Congress stronghold, South Goa fell to the “Modi wave” in 2014. However, the “Modi tsunami” in 2019 doesn’t seem to have swayed it.

It might be edifying to the BJP to examine the source of the growing anxiety among non-Hindus in the light of Prime Minister Narendra Modi’s statement that he wished to reach out to the minorities, despite his running a campaign that deliberately stoked their fears.

Goa would be a good place to start

And Goa would be a good place to start. For this is a state where the BJP won more seats where it fielded minority candidates – seven out of 13 – in the 2017 assembly elections. The imbalance in the result probably surprised the saffron party as well. But it proved two things: One, that in Goa, religious affinities are not a consideration in the voter’s choice. At least not yet. That fact was reinforced in the recent by-election results, when the Congress’s Babush Monserrate won Parrikar’s Panaji seat that had been with the BJP for 25 years. In another by-poll result, former minister Francis D’Souza’s son Joshua managed to retain his father’s seat on a BJP ticket.

But it is also apparent that unlike the Congress, under a BJP government in Goa, a Catholic representative can at most aspire to a ministerial berth, never the top job. Will Modi’s “inclusiveness” promise ever breach his own cynical mistrust of minorities? That’s probably a question Catholic MLAs in the BJP will be asking themselves in the post-Parrikar Goa.

“I wanted to be the chief minister, but the party did not make me,” Goa’s acting speaker Michael Lobo said recently, articulating his decision to turn down the offer of speaker’s post.

With the requisite RSS DNA to qualify, the BJP opted instead for the little-known small town Ayurveda practitioner Pramod Sawant to replace Parrikar. But the communal bonhomie forged for the BJP in Goa by Parrikar may well be set for a turn to a more muscular saffron under the current chief minister. Basking in the euphoria of Modi 2.0, and with three more MLAs now in his team – two of them poached from the MGP – Sawant unveiled an imposing portrait of V.D. Savarkar in the Goa secretariat on Monday. 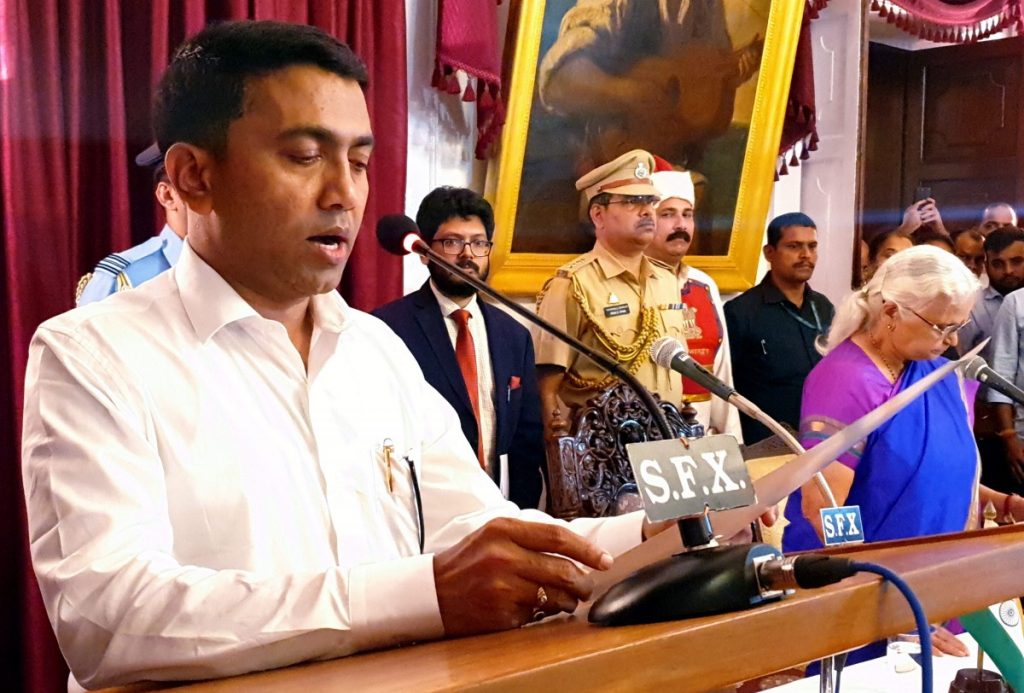 The BJP’s overarching dominance has also sent Goa’s smaller parties scurrying for cover. Worried that the BJP might do repeat what it did to the MGP, Goa Forward Party (GFP) leader Vijai Sardesai travelled abroad on a “private visit with his family”. But he also took along both his MLAs, Vinod Palienkar and Jayesh Salgaonkar.

Though the BJP has managed to claw its way up to becoming the single-largest party, with 17 MLAs (in a house of 40), it is still well short of a majority on its own. The GFP’s Sardesai (with 3 MLAs) currently holds the key to its survival. The Congress (15 MLAs + 1 NCP) is trying to bait Sardesai with the CM’s post to form an alternative government.

Like the MGP, which has now been reduce to a single digit in the assembly, the GFP’s survival depends on staying away from the looming shadow of an expansionist BJP.