All Muslims Should Have Been Sent to Pakistan in 1947, Says Modi Minister Giriraj Singh

Despite his controversial, communal remarks, the Bihar politician has risen from strength to strength in the past five years. 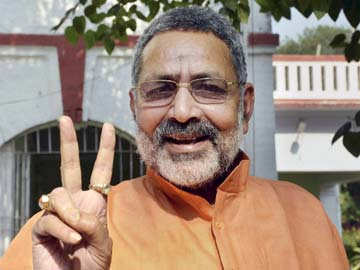 New Delhi: Giriraj Singh is the Modi government’s serial offender when it comes to offensive, communal remarks, except that his leader doesn’t seem to think he’s ever done anything wrong.

On Thursday, the Union minister for animal husbandry, dairy and fisheries added another feather to his cap by declaring there had been a “our ancestors” were guilty of a “major lapse” by not sending all Muslims  to Pakistan during partition in 1947.

Singh shot to national prominence during the 2014 Lok Sabha election when he declared that all those who do not vote for Modi should go to Pakistan. He was first inducted into Prime Minister’s Narendra Modi’s council of ministers in November 2014 and promoted to full cabinet rank in May 2019.

Sent to Purnia, Bihar as part of the government’s outreach aimed at assuring the country that there is nothing communal about the Citizenship (Amendment) Act, the senior BJP leader and minister lamented the fact that India was not Muslimfrei.

Addressing the BJP district working committee meeting in Purnia on Thursday, Singh stated that if only all Muslims had been forced to leave India in 1947, then there would not have been any protests against the CAA.

“The time has come to dedicate ourselves to the cause of country. Before 1947, our ancestors had been fighting for the independence of the country and Jinnah was planning to make India an Islamic state. Our ancestors committed a major lapse for which we are paying the price today – if at that time the Muslims had been sent there [Pakistan], we would not have had to face this situation,” he said.

The member of parliament from Begusarai added that the CAA was needed to fast track citizenship to non-muslim refugees from Pakistan, Bangladesh and Afghanistan. “If Bharatvanshi (people of Indian Origin) will not get a place in India, then which other country will give them asylum,” he said. Singh was on a two-day tour to create awareness about CAA among party workers.

Though BJP sources have claimed Singh was cautioned last week by party president J.P. Nadda for his remarks that  Deoband – home to a famous Islamic seminary – is the fountainhead of terrorism, the communal politician’s spectacular rise over the past five years is indicative of his value to the Sangh parivar and to the prime minister and his government.

Also read: Delhi Elections: How BJP and Its Leaders Are Trying to Fan Communal Sentiments

“Many times, our coalition partners say things which the LJP does not at all agree with. This one is such an example. Had a person of my party spoken in this fashion, I would have taken responsibility and acted against the person,” LJP chief Chirag Paswan said on Friday.