When asked about the chances of the chief minister being changed now, Gehlot reiterated that it is for the party high command to decide. 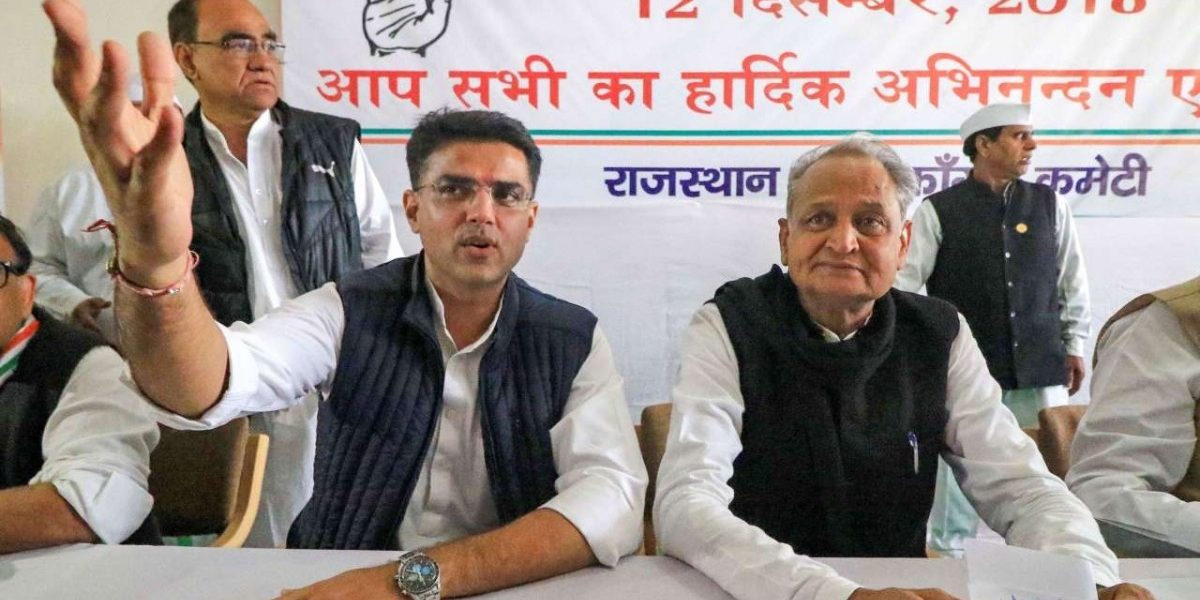 Jaipur: In a veiled attack on Sachin Pilot, Rajasthan chief minister Ashok Gehlot on Sunday said the party should look into why there was resentment among MLAs over the name of a new chief minister in the state.

Several MLAs loyal to Gehlot, who was seen as the frontrunner for the post of Congress national president, had last week submitted resignation letters over a possible move to appoint Pilot as the next chief minister.

Gehlot later announced that he will not contest the Congress presidential polls as he took moral responsibility for the political crisis in his state.

Referring to the crisis, he said 80-90% of the MLAs switch sides when a new chief minister is going to be appointed but this did not happen in Rajasthan.

“When a chief minister is changed, 80-90% (MLAs) leave him and switch sides. They turn to the new candidate. I too don’t consider it wrong. But it was a new case in Rajasthan where the MLAs got agitated just in the name of the new chief minister,” Gehlot said without naming Pilot.

“I was in Jaisalmer. I could not guess but the MLAs sensed who was going to be the new chief minister,” he told reporters after paying tributes to Mahatma Gandhi at the secretariat here.

When asked about the chances of the chief minister being changed now, Gehlot reiterated that it is for the party high command to decide.

“I am doing my work and if a decision has to be taken, it is for the party high command to take,” he said

The veteran Congressman on Saturday asked the people to send suggestions about the next budget directly to him, hinting that he was there to stay.

He also declared that he cannot remain away from the people of Rajasthan “till his last breath” and that the Congress government will complete its five years.

The chief minister said his objective is to bring the Congress government back to power in Rajasthan after the next polls, which is important for the revival of the party at the national level.

“I had already conveyed to madam (Sonia Gandhi) and Ajay Maken in August that it is not necessary that I should be the chief minister. I told them that I am ready to withdraw as CM. I said I will support and campaign because it should be our aim to revive the Congress party,” he said.

On Sunday, advertisements for Invest Rajasthan, going to be held in Jaipur on October 7 and 8, with the chief minister’s message appeared on the front pages of newspapers.

The functioning indicates Gehlot is confident that he is going to stay as the CM.

Gehlot also said that observer is a big post, and anyone acting as an observer should act on behalf of the party high command and should reflect their aura.

“Observers come on behalf of the party high command. Why such circumstances were developed here, research should be done,” he said, referring to the rebellion by the MLAs.

Gehlot said no one is perfect and he too learns every day and corrects himself whenever needed.

He asserted that he cannot ditch the 102 MLAs who had saved his government during the political crisis in 2020 and, therefore, he apologised to Sonia Gandhi.

Targeting the MLAs who had revolted against him in 2020, he said they were hand-in-glove with the BJP.

“Some of our MLAs met Amit Shah, Dharmendra Pradhan and other leaders. Amit Shah was offering sweets to our MLAs. So, how can I forget those 102 MLAs who saved the Congress government,” he said without naming the Congress MLAs.

“I have got public support whenever I needed, be it during the political crisis or during corona. Therefore, how can I stay away from them,” he said.

Hours before the Congress Legislature Party (CLP) meeting convened at the CM’s residence last Sunday, Gehlot’s loyalist MLAs held a parallel meeting at the residence of parliamentary affairs minister Shanti Dhariwal against any move of the party to make Pilot the new CM after Gehlot resigns for contesting Congress president elections.

They skipped the CLP meeting and went to speaker C.P. Joshi’s residence and submitted their resignation. Their demand was to choose someone from the 102 MLAs who supported Gehlot during the political crisis in July 2020 which happened due to the rebellion of the then deputy CM Pilot and 18 other Congress MLAs against the leadership of Gehlot as the new CM.

AICC general secretary in charge for Rajasthan Ajay Maken and then leader of opposition in Rajya Sabha Mallikarjun Kharge, who is now contesting Congress president elections, were sent by the party high command as observers to Rajasthan to hold the CLP meeting.