Gauri Lankesh’s Argument Has Not Been Laid to Rest

Lankesh’s views have been relentlessly against what she considered a fascist project taking over Indian democracy. Her silenced voice has spoken so much and so many times, it is impossible for even walls not to hear her. 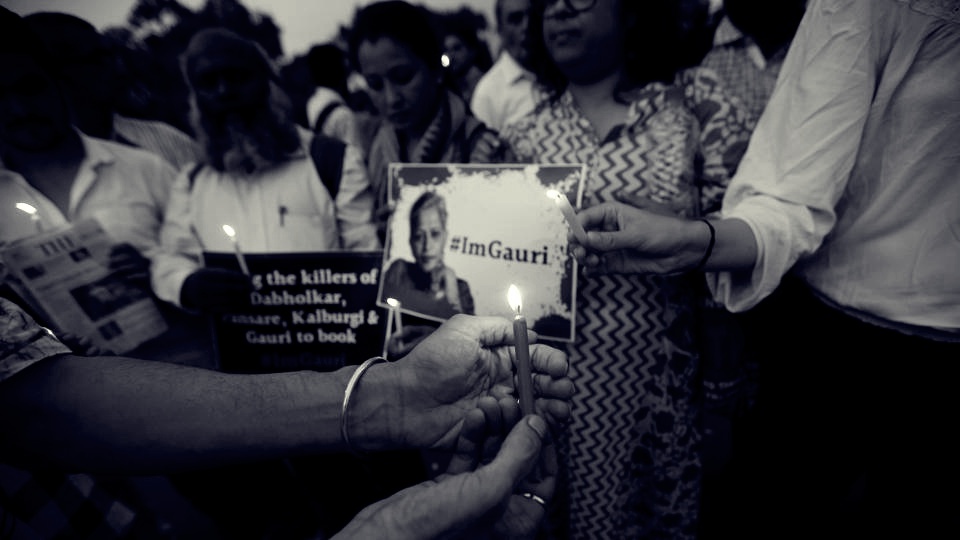 The slain journalist and activist Gauri Lankesh was laid to rest in Bengaluru with state honours. It was a political murder carried out by henchmen who may have known nothing about Lankesh, except that she had to be killed. Politicians who do an ugly job with power often hire henchmen to silence those who remind them of it. The logic is, politicians have the right to play with their job, but citizens don’t have the right to question them beyond a permissible point.

But who in a democracy decides what that permissible point is: the politician, the citizen, or the law that guarantees their rights? There is an invisible barbwire between power and the people, and if you try to cross it, you have to be ready to bleed.

Lankesh, who believed in democracy, and did not feel intimidated, crossed the barbwire to her peril. Democracy guarantees you your voice, but it cannot guarantee you your life. Democracy is not an antidote to the machinations of politics, and no politics before and after Gandhi has been able to beat the logic of crude violence.

In December 2016, Lankesh was convicted for defamation in a case filed against her by two BJP members and sentenced to six months in jail, along with a penalty. Lankesh, in her Kannada weekly, Gauri Lankesh Patrike, had made certain allegations against these two politicians. The court, however, granted her bail. She was free to appeal to a higher court. This freedom also exposed her to a risk. Courts guarantee you legal freedom, but they cannot guarantee you your life. Lankesh’s views, along with her work as an investigative journalist, have been relentlessly against what she considered a fascist project taking over Indian democracy. The strength of her political arguments was always corroborated by the details she would offer on every issue.

Speaking at the National Convention of Human Rights Defenders held in Delhi during March earlier this year, Lankesh put her main concern on the table: “Karnataka’s trajectory from a progressive, secular state to a communal state has been an interesting and crippling one..” She goes on to talk of the 12th century social reformer from Karnataka, Basavanna, “who spoke much before Marx about the dignity of labour, of equality, about rationality and specifically, against Brahmin hegemony,” and who was being appropriated without much justification by the Hindu right today. She spoke of the 19th century Muslim saint-poet, Shishunala Sharifa, known as “the Kabir of Karnataka,” and his guru, the Brahmin saint, Govind Bhatta.

In the backdrop of this cultural past, Lankesh drew the contemporary state of politics in Karnataka, full of communalism, death threats and all sorts of intimidations. She spoke with passion, as if she was not just arguing for something, but pleading her case, urging people to open their eyes. Those arguments and pleading reverberate more urgently against the news of her murder. As if all that she was saying was too true to be heard, or too true to be forgotten, by those who did not want to hear the truths and wanted others to forget them. Lankesh’s murder is an attempt to murder the constant repetition of her arguments. But her silenced voice has spoken so much and so many times, it is impossible for even walls not to hear her.

Lankesh and her team had filed a petition in the Supreme Court in 2015, against attempts to distort the secular nature of the ‘Guru Dattatreya Bababudan Swami Dargah’ in the Chikkamagaluru district of Karnataka. She spoke of attempts being made to turn the shrine, where both Hindus and Muslims offered prayers, into an “‘Ayodhya of South India’ by making it a temple and appointing a priest for it”. Lankesh felt strongly against the possible vandalisation of a rich cultural memory. She felt strongly as a democrat above all: “As a citizen of India, I oppose the BJP’s fascist and communal politics.” She felt strongly as a Hindu too: “I oppose its misinterpretation of ‘Hindu Dharma’ ideals.” And in the same breath, she felt strongly against how not to be Hindu as well: “I oppose the caste system of the ‘Hindu Dharma’, which is unfair, unjust and gender biased.” One wonders whether the men who hired her killers felt strongly about democracy, Hinduism or the caste system, felt strongly about anything for that matter, except how best to disfigure meanings and lives.

In an interview, Lankesh asked the question that today everyone is asking for her, “Can you debase someone just because she happens to be a woman with a voice?” This is an important question for both politics and culture in a democracy. After news of Lankesh’s murder spread in the social media, agents of the Hindu right, with many of them followed by BJP members on Twitter, poured their toxic hatred. As if serious political differences are today a logical – and moral – justification for murder. Hatred blinds you not only from empathy but also remorse. Nationalism bereft of remorse is a nationalism that won’t pause to reflect on its sins. Nationalism that does not atone for its sins will continue its crimes unabated. Perhaps only in a world after nationalism, can the skeletons in the heart be finally buried.

Apart from the obvious parallels with the killing of scholar M.M. Kalburgi in August 2015, the murder of Lankesh is also remniscient of the Pakistani human rights activist and social worker, Sabeen Mahmud, who was shot dead in Karachi in August 2015. Not just because both were women activists who were put to death by powerful men who did not like their audacity. But also because of how, despite the marked differences in their political history, the space for liberal voices have been progressively shrinking in the two partitioned nations. But their arguments are still ringing loud and clear and inspiring others. By no means has Lankesh’s argument against fascism been laid to rest.