They Killed the Modern Akkamahadevi

Gauri Lankesh was the key brain for the impetus to give Lingayat's separate religion status. Perhaps that is why she had to lay down her life. 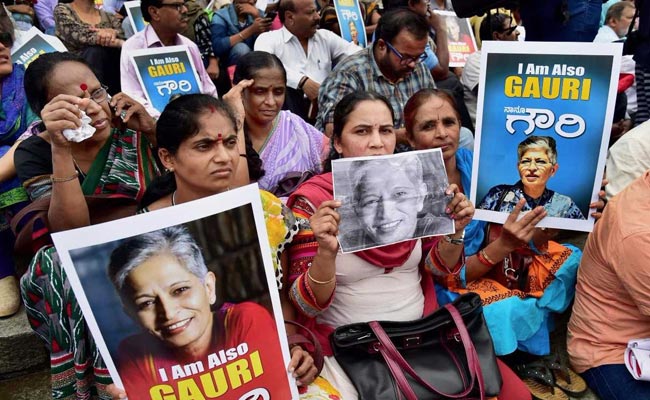 Akka Gauri of Lankesh, I am not mourning for you. I only worship you. Credit: PTI

At around 9:30 am one day in July 2016, I got a phone call from an unknown number. On the other side, a very soft and gentle tone asked, “Can I speak to professor Kancha Ilaiah?”

“Professor, this is Gauri Lankesh from Bengaluru,” she said. I was thrilled.

“I read your review of my book Why I am Not a Hindu in Bangalore Mirror; I am glad to talk to you,” I said.

“I admire your work; my most favorite book is Buffalo Nationalism. I want to translate it into Kannada,” she replied.

“Because I am a buffalo myself,” she said.

We were later supposed to meet in writer Akar Patel’s house in Bengaluru but she could not turn up because of some paper work. I never got to meet her.

There is a certain pride associated with her family name – Lankesh. Lankeshwar of the south was Ravan and Lankeshwari was Mandodari. But the first victim of the Lankesh family tradition was the beautiful Shurpanakha. Gauri’s is a Lingayat (though rationalist) family. In the Lingayat tradition, one of the most popular people’s poetess was Akkamahadevi of the 13th century. She was the first Shudra spiritual and social figure. She was also the first feminist of the Kannada land.

The whole Basaveshwara religion – which has had a long-standing demand of being recognised as a separate religion – has Dravidian roots, connecting to Sri Lankan Ravana heritage. Karnataka is also the land of Mahishasura, with a huge statue of Mahisha on the Chamundi Hills near Mysore. The city’s name itself evolved out of Mahisha’s heritage. The Hindutva forces of Karnataka are worried about the pressing demand of the separate Lingayat religion issue bubbling in Karnataka at the moment. The BJP and the RSS leadership is also divided on this issue on the lines of religion and caste.

The newly-kindled Lingayat religious movement is a big worry for BJP state chief B.S. Yeddyurappa, as he is a Lingayat. He chose to be at Gauri’s burial. But the people most worried about this demand are BJP MPs Ananth Kumar and Anant Kumar Hegde.

Gauri’s ex-husband, columnist Chidanada Rajaghatta, described her in a glowing tribute as a woman of “amazing grace”. I have not known any other divorced husband telling the world such a moving story of a post-divorce relationship. In his tribute, he describes her love and respect for the poor and oppressed. 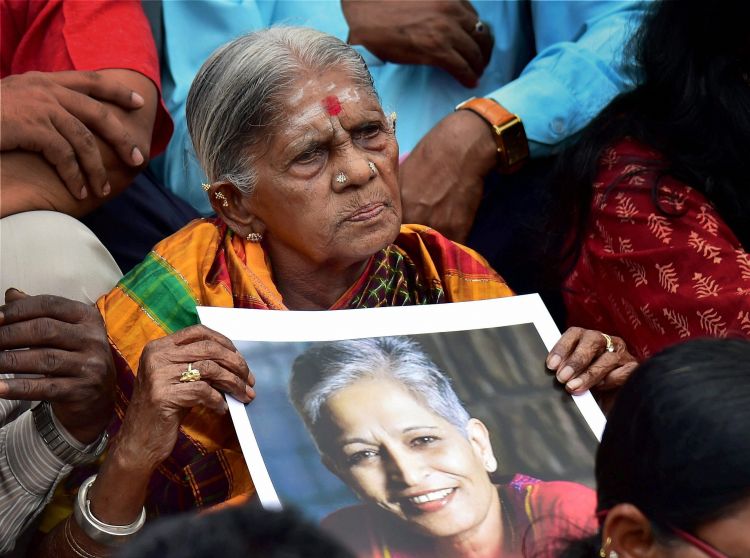 Gauri Lankesh was the most of all orphans. Credit: PTI

She was a mother to many orphans, not just the youth involved in nationalism and anti-nationalism discourse like Kanhaiya Kumar and Umar Khalid. She had given life to many lifeless and homeless Ashas and Ushas, as Rajaghatta said. She was the revered friend of the Dalits, OBCs, adivasis and women’s movements.

Nationalist discourses come and go. But the issue of Lingayat religion goes back 750 years. Basava was forced to commit suicide by his contemporary Brahminists. Akkamahadevi, said in one of her famous vachanas:

“Having vanquished the six passions and become

The trinity of body, thought and speech”-…

Having ended the duality and become a unity

Is because of the grace of you all.

I salute Basavanna and all assembled here.”

Gauri too vanquished into the earth of her elder akka by saluting Basavanna and Akkamahadevi, and all assembled at her bullet-torn body. That body is not resting in peace – investigation or no investigation, arrests or no arrests.

Gauri, the modern akka, has vanquished all her passions, ever since she divorced her husband and became a buffalo of that land to give milk to all the poor, touchables and untouchables. The question now is what the Lingayats and lovers of Basava and Akkamahadevi will need to do to fulfill her dream.

Gauri opposed violence with all her might. But her enemy’s bullets did not keep away from her. Those lovers of violence pumped bullets into her vanquished, impassioned body. I do not think the Naxalites – who she was supposed to be dealing with – understood her passion for equality within the framework of democracy. But the Sangh parivar definitely understood it well. They know that it has huge implications for Brahminsm of Karnataka and the whole of India. Religious movements are culture-centred. Economy is the external entity of those movements. The Sangh parivar understands this well.

Even M.M. Kalburgi was killed, it is said, because of his repeated writings on how the Lingayat religion being a separate religion from Hinduism. Ever since Karnataka chief minister Siddaramaiah named a modern Vijaypuri women’s university as Akkamahadevi University and said in the Ambedkar International Conference in July that the Lingayat religion would get a separate religious status, the battle-lines were drawn. I am told that Gauri was the key brain for the new impetus. Therefore, within no time, she had to lay down her life.

Like Akkamahadevi, the modern akka Gauri, with a beautiful face and close-cut hair, sharp tongue in Kannada and English and an “amazing grace”, is restless in the Kannada soil. Her impassioned body is killed by the angry bullets. But her transformative and egalitarian spirit seems to be restless lying in the soil. I think she will resurrect. Once that happens, she will be on the same page as Basava and Akkamahadevi of that great land. Akka Gauri of Lankesh, I am not mourning for you. I only worship you.