From a film-shoot in Corbett after the Pulwama attack, to campaign rallies while Abhinandan was in captivity, where all has Narendra Modi been? 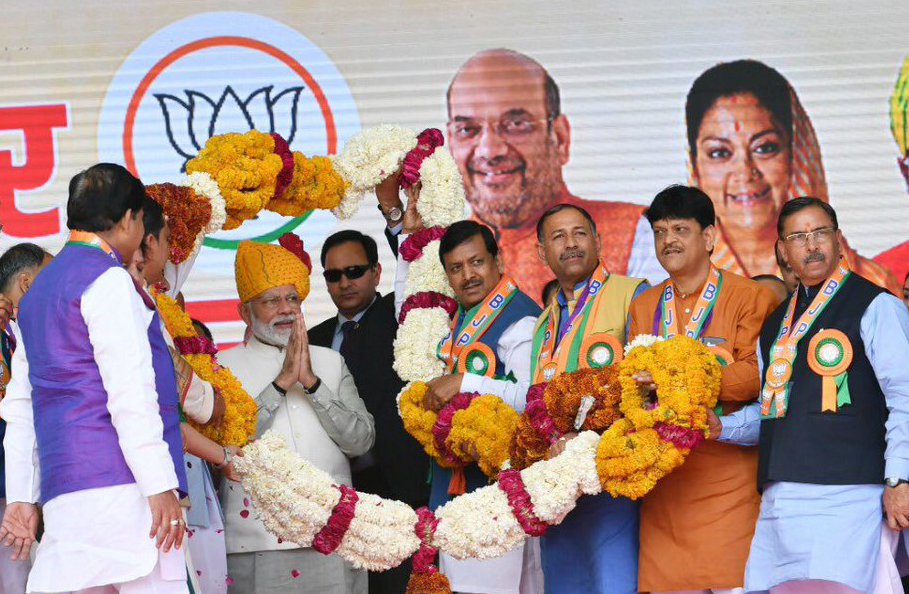 Modi at a BJP rally in Tonk, Rajasthan. Credit: Twitter/@narendramodi

New Delhi: India has spent two weeks contemplating deadly terrorism, intelligence failures, airstrikes across the Line of Control in both directions, and the possibility of war with its nuclear-armed neighbour.

As TV presenters turned into government proxies – ‘leaking’ hyperbolic claims about the Balakot strikes, and prosecuting the Pakistani response – the prime minister and his cabinet have been remarkably muted, especially when the going was tough.

Where has Narendra Modi been in the last two weeks? The Wire breaks it down, day by day. One of several photographs tweeted by Rahul Gandhi of the prime minister in Jim Corbett national park. Credit: Twitter/RahulGandhi

National security scenario: In Lethpora, Pulwama, a suicide attack by a car-bomber killed 40 jawans of the Central Reserve Police Force at around 3.15 pm.

PM’s schedule: Modi was in Uttarakhand when the attack took place, for a documentary shoot at Corbett National Park. There are different versions on when he left the shoot, but local newspapers have suggested he only exited the park at 6.40 pm – more than three hours after the bombing.

PM’s schedule: Modi gave his first statement after the attack from Jhansi, Uttar Pradesh, where he said that the martyrdom of the CRPF men would not go to waste.

In Jhansi, he also laid the foundation stones for multiple projects, and made time to address a BJP rally.

Modi also flagged off the Vande Bharat Express, or Train 18.

In the evening, the prime minister paid tribute to the soldiers killed in the Pulwama attack in New Delhi. India began to receive high-level support from the global community as US National Security Advisor John Bolton endorsed India’s right to self-defence after the attack.

There was also dispersed violence and targeting of Kashmiri students in India, and riots took place in Jammu city despite a curfew.

India raised customs duty on all Pakistani goods to 200%.

PM’s schedule: Modi was on the campaign trail in Maharashtra, skipping the all-party meeting held in solidarity with the troops.

In Dhule, he inaugurated an irrigation project, the newly electrified Jalgaon-Udhana rail project and a train. He laid foundation stones for two new railway lines. In Yavatmal, he addressed women in self-help groups.

It was good interacting with my sisters and brothers of Maharashtra during programmes at Yavatmal and Dhule.

Here are some glimpses. pic.twitter.com/vkrtfw4WJA

National security scenario: On Sunday, the J&K government withdrew the security cover of five separatist leaders. Violence against Kashmiri students continued and four students were charged with sedition in Jaipur.

Bollywood’s Federation Of Western India Cine Employees called for a ban on all actors and artists from Pakistan.

PM’s schedule: The prime minister visited Jharkhand and Bihar. In Ranchi, he interacted with beneficiaries of the Ayushman Bharat health insurance scheme.

He also unveiled several development projects in Hazaribagh, and laid foundation stones for others in Barauni.

Will be in Hazaribagh, Jharkhand today to inaugurate:

Foundation stone for many projects will also be laid.

The killing of JeM’s Ghazi led to fake images spreading on news channels /Modi with the president of Argentina. Credit: Twitter/PIB

National security scenario: In an extended armed encounter, an alleged mastermind of the Pulwama attack, Abdul Rasheed Ghazi, was killed along with five soldiers, including an army major.

He tweeted to celebratory message about the Shiv Sena-BJP electoral alliance in Maharashtra.

Our association with the @ShivSena goes beyond politics. We are bound by a desire to see a strong and developed India.

The decision to contest together strengthens the NDA significantly. I am sure our alliance is going to be Maharashtra’s first and only choice!

National security scenario: The Indian army claimed that Jaish leadership had been eliminated in Kashmir “in less than a hundred hours”.

Pakistan’s prime minister Imran Khan made his first statement, saying that Pakistan would not think twice before retaliating to military action by India.

Back in New Delhi, he broke protocol to receive the Saudi crown prince – just arrived from Pakistan – on the airport tarmac with a warm embrace. Modi with the crown prince of Saudi Arabia. Credit: PIB

A Pakistani prisoner was murdered in a Jaipur jail. Officials said it was not connected with the Pulwama attack, but anti-Pakistan slogans were raised.

Modi then left for South Korea.

This evening, I will be leaving for the Republic of Korea at the invitation of President @moonriver365.

We regard the Republic of Korea as a valued friend with which we have a Special Strategic Partnership. 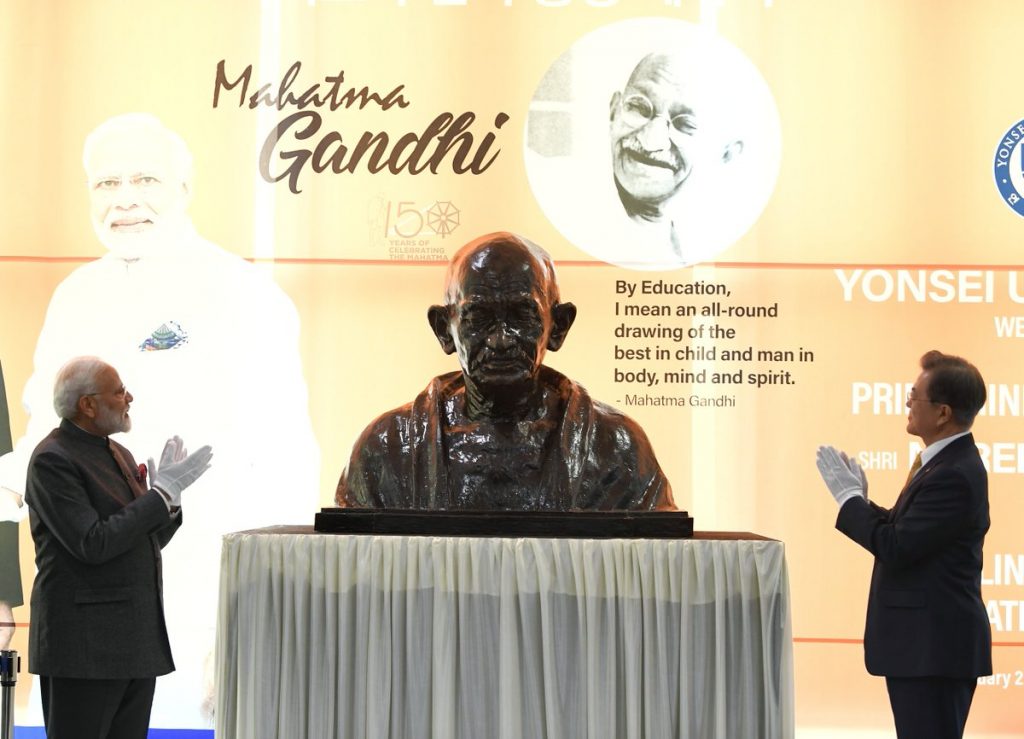 National security scenario: Nitin Gadkari tweeted that the Modi government had “decided to stop our share of water which used to flow to Pakistan”. It soon became clear that not only was the BJP leader referring to India’s share under the pact, but it was also just a reiteration of a previous decision.

Imran Khan publicly authorised the Pakistan military to “respond decisively and comprehensively to any aggression or misadventure”.

National security scenario: Yaseen Malik, chief of the Jammu-Kashmir Liberation Front, and leaders of the Jamaat-e-Islami were detained and their homes raided, amid rumours of wider crackdown on separatists in Jammu and Kashmir.

US President Donald Trump said the situation between India and Pakistan is “very dangerous”.

He also spoke at a BJP rally in Tonk, Rajasthan. Here, he finally broke his silence on violence against Kashmiris across the country after the Pulwama attack – and declared that the fight is for Kashmir, not against Kashmir or Kashmiris.

PM’s schedule: Reached Gorakhpur, where he launches the PM-Kisan Scheme. He also visited the Kumbh at Prayagraj and addressed the Swachh Kumbh and Swachh Aabhaar programme.

Modi also tweeted to announce a massive digital interaction and kicking off a electioneering slogan, #MeraBoothSabseMajbooth.

Enrich the programme on 28th by: PM’s schedule: The prime minister addressed two separate public events on February 25 – the Rising India Summit and the inauguration of the National War Memorial in Delhi. His speech drew sharp criticism for politicising the event by attacking the Congress from that platform.

Modi also appeared at the News18 Rising India summit, where he publicised his government’s achievements. National security scenario: As the Balakot airstrikes across the Line of Control provoked spiralling tensions within India, and between India and Pakistan, foreign secretary Vijay Gokhale confirmed the attack, saying “a very large number of JeM terrorists, trainers, senior commanders and jihadis were eliminated”.

Major Indian cities are put on high alert, and shelling and other ceasefire violations begin on the LoC.

PM’s schedule: Modi addressed a rally in Churu, Rajasthan, opening with a poem that was also the BJP’s 2014 campaign slogan. He also made several claims about the Congress government in the state that don’t quite match reality.

He also unveiled the world’s largest Bhagavad Gita at an ISKCON event in New Delhi, and had a photo-op in the Delhi Metro.

National security scenario: On Wednesday, Pakistan’s F-16 jets entered Indian airspace and conducted airstrikes on open ground, after locking onto military installations. In an aerial skirmish, IAF Wing Commander Abhinandan Varthaman was shot down and taken into custody by the Pakistan army.

National security scenario: Pakistan PM Imran Khan said that the IAF pilot would be released as a “peace gesture”.

PM’s schedule: Modi presented the Shanti Swarup Bhatnagar Prizes for Science and Technology in New Delhi. In his speech, moments after Imran Khan announced that Abhinandan would be freed, Modi made a rather cryptic remark that seemed to allude to the Wing Commander and the situation with Pakistan.

“You people spend your lives in laboratories. It is a custom to first make a ‘pilot project’. Scalability is done after that. Just now one pilot project has been completed,” the prime minister said. “Now we have to make it real, earlier it was just practice.”

National security scenario: On Friday, Pakistan released Abhinandan after a delay of hours. The delay, Indian officials, said, was because the Pakistani military decided to shoot a video of the pilot “for propaganda purposes”.

PM’s schedule: The following day, he addressed a rally in Kanyakumari, Tamil Nadu, where he said that “every Indian is proud that brave Wing Commander Abhinandan Varthaman is from Tamil Nadu”.

Modi didn’t greet Abhinandan on his return, and around an hour after the pilot was handed over, he tweeted:

The nation is proud of your exemplary courage.

Our armed forces are an inspiration for 130 crore Indians.