How Fringe Groups in Tamil Nadu Are Setting the Political Agenda

The recent protests against Prime Minister Narendra Modi and the IPL make it difficult to ignore the activities of these groups. 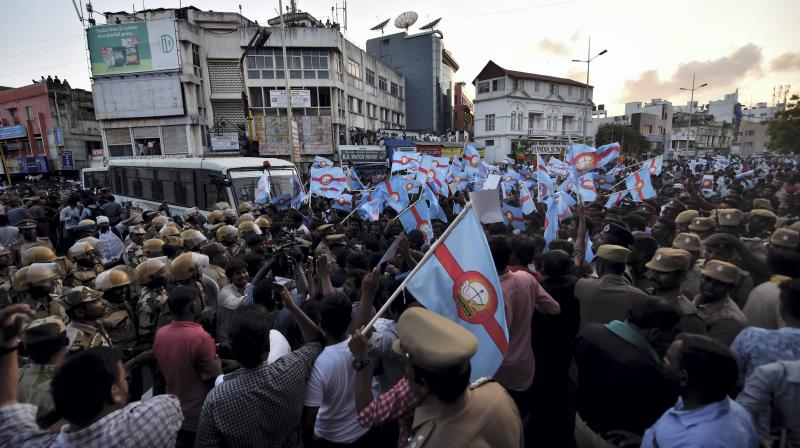 Massive protests were witnessed on Tuesday ahead of the match between CSK and Kolkata Knight Riders. Credit: PTI

With the emergence of fringe groups, Tamil Nadu has been witnessing a new trend over the last seven years. Appearing on the state’s political landscape for the first time since Independence, the trend has gained pace after the death of former chief minister J. Jayalalithaa in December 2016. Though the rise of these fringe groups can’t be described as ‘exponential’ right now, it is nevertheless difficult to ignore their activities. To put it squarely, these fringe groups are setting the political agenda not just of Tamil Nadu’s mainstream political parties, but also of the state government.

The latest example comes from the massive protests around ‘injustice done to Tamil Nadu, in the Cauvery issue,’ led by the fringe groups against the scheduled 1st Indian Premiere League match in Chennai. The intensity of the protests eventually forced the six IPL cricket matches scheduled in Chennai to be shifted outside Tamil Nadu. The IPL management conducted the first match at the Chepauk Cricket stadium in Chennai, by deploying over 5,000 police men and women.

A second round of protests – displaying black flags and black balloons – played out against Prime Minister Narendra Modi, drawing attention to what the protestors believe to be a betrayal of the Centre in getting Cauvery water to Tamil Nadu, despite the Supreme Court’s orders. Besides the fringe groups, participants in the second strike included leaders and cadres of nine recognised political parties, including the state’s major opposition party, Dravida Munnetra Kazhagam (DMK), Congress, left parties, and Vaiko’s Marumalarchi Dravida Munnetra Kazhagam (MDMK). That there is palpable public anger over this issue – and against the Centre – is evident among all sections of society in Tamil Nadu.

Fringe groups and their politics

The rise and growth of Tamil Nadu’s fringe groups constitutes an interesting subject of study. Most of these groups were founded during 2008 – 2009, when the war between the Liberation Tigers of Tamil Eelam or LTTE and Sri Lankan military was at its peak. The assassination of LTTE chief Prabhakaran by the Sri Lanka’s army, ended the civil war on May 19, 2009 with

When the war was going on, the fringe groups regularly staged massive protests demanding intervention by the central government to save LTTE cadres and Prabhakaran.  After the war ended, these groups gradually started taking up various public issues, including protesting against Sri Lanka’s cricketers and athletes coming to Chennai.

The fringe groups were lucky to have in Jayalalithaa government (2011-2016) a tacit if not public supporter of the fringe groups’ activities. In fact, Jayalalithaa government during this period, twice passed resolutions in the state assembly, appealing to the Manmohan Singh government at the Centre to impose economic sanctions on Sri Lanka. The Tamil Nadu government urged the centre to continue with the sanctions till Sri Lanka’s top military officials responsible for the killing of 1.5 lakh Tamils, are brought to justice before a ‘war tribunal.

In fact, Jayalalithaa even said that “the issue of 1.5 lakh Tamils getting killed in the last stages of war was nothing but genocide”, comparing the killings to the Holocaust.  On August 30, 2011 Tamil Nadu assembly passed a resolution unanimously urging the Centre not to hang Rajiv Gandhi’s killers – Perarivalan, Murugan and Santhan – Jayalallithaa appealed to the centre to desist from giving military training to the Sri Lankan army. The few Sri Lankan soldiers who were under army training in Chennai were immediately sent back by the state government. Not just that, Jayalalithaa government event sent back Sri Lanka’s under 14 boys’ cricket team from the Chennai airport itself.

“Such activity has in fact emboldened these Tamil Nationalist groups.  They started slowly tasting blood and their areas of operations expanded.  Originally they were addressing only the interests of Sri Lankan Tamils. But after the end of the war in 2009 May, their areas of operations spread to almost all spheres of life in Tamil Nadu”, says a research scholar of international affairs, in the Madras University.

There are, however, a large number of intellectuals and authors who strongly support the fringe groups. “Who is responsible for this development? It is the government.  For all kinds of livelihood issues (whether it is Kudankulam or GAIL controversy), people are taking to streets to oppose such projects. They are apprehensive that these projects will adversely affect their livelihood. The governments are not responding and automatically a vacuum develop. Then these groups start taking up these issues and fight the government,” says Azhi Senthilnathan, an author and one of the founders of a small Tamil Nationalist group.

He strongly opposes the term ‘fringe’. “The very word ‘fringe’ is itself a derogatory one. In the West, they are called ‘activist groups’. They set the agenda for their respective governments on several issues. In contemporary Tamil Nadu political space is different from electoral space.  The political situation and political discourse are dominated by ‘activist groups’ who are described as fringe parties by the mainstream media.

Thirumurugan Gandhi, convenor of “May 17 movement” (a Tamil Nationalist group) agrees with this view.  “Look at the DMK’s attitude to the recent protests – when all ‘activist groups’ were demanding shifting of IPL matches outside Tamil Nadu, DMK leader M.K. Stalin just said that the IPL players should wear black bands. He did not ask for shifting IPL matches to to any other state. In fact, not a single mainstream political party raised that demand.

But in the wake of our struggle, all mainstream political parties started demanding that IPL matches be shifted out of Chennai. It is our struggle, the ‘activist group’s’ struggle which forced the government to tell IPL organisers that they cannot provide adequate police protection for the remaining six IPL matches in Chennai. It was only then that the IPL chairman announced the decision to shift the matches. This is a classic example of how ‘activist groups’ are setting the agenda not only for mainstream political parties, but sometimes also for the governments.

There are several levels at which these group transact politics. First – a particular group identifies the relevant issues they would take up. This is followed by consultations with other groups preceding the formation of a coalition of activist groups. The agitations they lead are not always successful. Sometimes they do not endure beyond a couple of protests. But sometimes agitations are sustained, forcing mainstream parties to address the challenges, believes, A. Madhan Rao, a political observer and a research scholar of Tamil Nadu politics.

But politicians from mainstream political parties outright dismiss the claims of “activist groups”. Peter Alphonse, a former MP and senior leader of the Congress said, “The mainstream political parties are not able to balance the conflict of interests prevailing among some groups in our society today.  He further says that the support these ‘fringe groups’ are getting from the public is just a temporary one and can disappear any time. And that it’s the end of road for them.”

Alphonse believes that if the fringe groups gather strength and aim to capture power, it would be nothing but the “destruction of parliamentary democracy in India”.