Eight Dead in Kashmir Violence After the Killing of Burhan Wani

The police said that over 30 people were injured in action by the security forces against the violent mobs at several places across the valley. 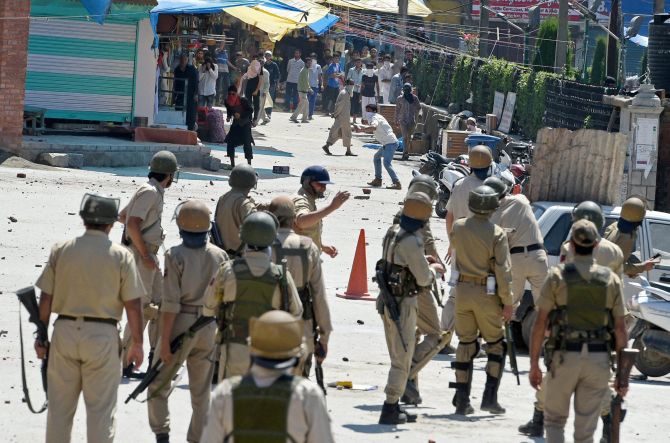 Srinagar: Eight people were killed and 50 were injured in clashes in Kashmir between security forces and protesters who set ablaze five buildings including three police installations and some vehicles to protest the killing of Hizbul Mujahideen militant Burhan Wani in an encounter.

Curfew-like restrictions were imposed in parts of Kashmir, including Srinagar city, and the Amarnath Yatra was suspended as authorities apprehended protests in the Valley. Protesters blocked main roads and entry into the interiors of the city at many places following a strike call by top separatist leaders, who were put under house arrest as a precautionary measure.

Mobile internet across Kashmir has been suspended while mobile call services have been restricted in south Kashmir. Train services from Baramulla in the Kashmir valley to Banihal town in Jammu have been suspended. The Srinagar-Jammu National Highway, that passes through south Kashmir, has also been closed.

Former Jammu and Kashmir chief minister Omar Abdullah took to Twitter and said that Wani had become an icon for the disaffected community after his death.

Aftr many yrs I hear slogans for "Azadi" resonate from the mosque in my uptown Srinagar locality. Kashmir's disaffected got a new icon y'day

Burhan’s funeral in Tral town was attended by thousands of people while violent protests were reported from a number of places in Khadinyar in north Kashmir to Kulgam in south, a day after the militant commander was killed.

A 25-year-old youth, Amir Bashir, was hit by a bullet allegedly fired by security forces on protesters in the Verinag area of Anantnag district in south Kashmir, a police official said. Bashir was shifted to a hospital but he succumbed to injuries on the way, the official said.

Another person was reportedly killed in similar circumstances in Qaimoh area late last night. Zubair Ahmad had multiple bullet injuries in his chest, a doctor at the Anantnag district hospital said on condition of anonymity.

A police official said that a 16-year-old boy, identified as Saqib Manzoor, was declared “brought dead” by doctors at the SMHS hospital.

There were reports that a protester drowned in a river at Ganeshpora as security forces chased a group of protesters. The police did not confirm the incident.

The police said that over 30 other people were injured as security forces took action against violent mobs at several places across the valley. However, sources in various hospitals of the city put the number of injured persons at around 50.

Condition of the two of the injured was stated to be critical.

The police said that protesters indulged in widespread violence and arson and  attacked police posts at several places and also damaged the BJP office in Kulgam area.

The mobs set on fire police stations at Achabal and Damhal Hanjipora while a police post at Kund in Qazigung was also set ablaze.

Two government offices were set on fire by protestors in Tral town of Pulwama district as well while three buses were also set on fire at Qazigund.