Haryana: Pressure Mounts on JJP as More MLAs Come Out in Support of Farmers' Protest

After independent MLA Sombir Sangwan withdrew support from the government last week, five JJP MLAs issued support for the stir and objected to "inappropriate comments" made against farmers. 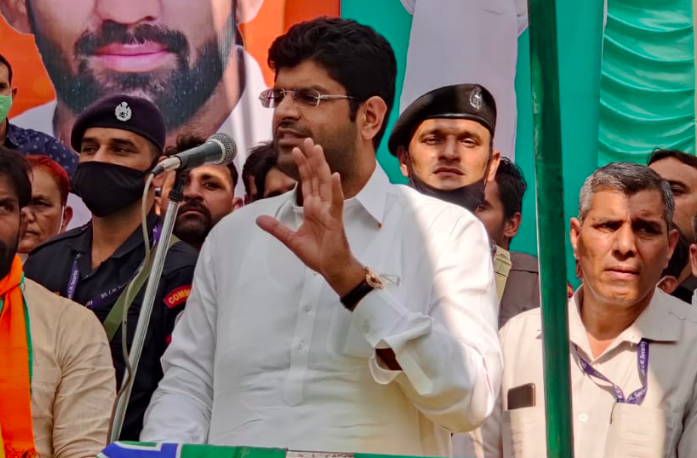 New Delhi: Five MLAs from the Jannayak Janta Party (JJP) have expressed support for the ongoing farmers’ agitation and have demanded that the three recently-enacted farm laws be withdrawn, according to a report in The Hindu.

“While farmers are producing foodgrain to feed the people, their children are protecting the frontiers of the country. Political leaders who are making inappropriate comments about the protesting farmers should be reined in,” Ramkumar Gautam said and added that the Centre should ensure that the minimum support price (MSP) regime will continue.

Last week, independent Dadri MLA Sombir Sangwan had also resigned as chairman of the Haryana Livestock Development Board and withdrew support from the “anti-farmer government”. “This government instead of sympathising with farmers’ cause used all measures like water cannons, tear gas to stop them from marching to Delhi. I cannot continue my support to such a government,” Sangwan said.

In October, JJP MLA Jogi Ram Sihag from Hisar’s Barwala refused to accept an appointment to become the chairman of the Haryana Housing Board. “The government has failed to start a dialogue with the protesting farmers. As a farmer’s son, I know the consequences these farm laws will have,” Sihag told the Hindustan Times.

“If the people of my constituency will ask me to step down, immediately I will resign from my post. This MLA’s position was given by Barwala voters, not any party. I will not accept any position whether it can be a ministry or board chairman till farmers’ grievances are resolved,” Sihag said.

In response to recent developments, JJP spokesperson said that the party’s national president Ajay Chautala had already demanded that a guarantee for MSP should be given to the farmers in writing and that the cases registered against farmers during their march to Delhi be withdrawn.

“The legislators’ support to the agitation is in line with the party’s stand on the issue. Besides, they have not made any assertions against the party or offered to resign. MLAs from all parties have supported the farmers’ agitation in Haryana,” party spokesperson Deep Kamal Saharan said.

Senior party leader Digvijay Chautala told The Hindu that the party was hoping for a positive outcome from the sixth round of dialogue between farmers’ unions and the Centre on December 9. Chautala also said that the party and its 10 legislators stood in solidarity with farmers.

Chautala further added that senior JJP leaders and deputy chief minister Dushyant Chautala had spoken in favour of the farmers with ministers in the Central government and said that there was no need for the MLAs to resign, as all the party’s legislators are supporting the farmers. “For JJP, farmers and khaps are most important. The decisions of khaps are higher than anything else,” he said.

The JJP, which draws a lot of support from farmers, has been under mounting pressure to take a stand on the recently passed laws. In October, representatives of 17 farmers’ organisations held a dharna in Sirsa demanding the resignation of Dushyant Chautala and power minister Ranjit Singh.

The Congress party also slammed the JJP for its “betrayal towards farmers”. “They (JJP) sought votes from farmers against the BJP, promised loan waiver but today that farmer is on the roads facing water cannons and teargas shells. But the JJP is clinging on to power,” senior Congress leader Randeep Singh Surjewala said last week.

The JJP had contested the 2019 assembly polls against the BJP but later formed a post-poll alliance with the saffron party.

Haryana Congress president Kumari Selja said the JJP had betrayed the people by extending support to the BJP last year. “Now, JJP has an opportunity to withdraw its support to the government and stand in favour of the people of Haryana,” she said.

Leader of the opposition Bhupinder Singh Hooda also called on the JJP and independent MLAs to withdraw their support for the government. “Such leaders have shown greater love for power than farmers’ interests,” he said.