Farm Bills: Opposition Walks Out of RS; House Passes 7 Bills in Under 4 Hours

The NDA is doubling down on the Bills, while also trying to use the 'abuse' of the upper house's deputy chairman Harivansh to its electoral advantage in Bihar.

Opposition parties staged a walkout from the Rajya Sabha on September 22, 2020. Photo: RSTV screngrab via PTI

New Delhi: In one of the biggest pushbacks against the Narendra Modi government, the opposition decided to boycott the Rajya Sabha until its key demands are met. The House, though, decided to go on with business as usual – passing seven Bills in under four hours without the opposition present.

The Bills passed include one that removes cereals, pulses and onion from the essential commodities list and another that abolishes the penalty for certain offences by companies. Only members from the ruling Bharatiya Janata Party and its ally Janata Dal (United), and those of parties such as AIADMK, BJD, YSR-Congress and TDP, which have been extending support to the Modi government on various issues, participated in the debates on the Bills.

Speaking about the decision to walk out, senior Congress leader Ghulam Nabi Azad declared that until the suspension of the eight MPs is revoked, and their three demands to strengthen the minimum support price (MSP) structure are not met, his party will not participate in any further proceedings.

The Congress members immediately walked out after the decision, followed by the MPs of Left parties, the Trinamool Congress (TMC) and the Aam Aadmi Party. However, discussions on the contentious farm Bills continued in the upper house.

Azad made pointed demands on Tuesday morning. He said that a Bill should be brought in to prevent private players from procuring food grains below the MSP set by the government on the basis of the formula recommended by the M.S. Swaminathan Committee report. He also demanded that the government or the Food Corporation of India (FCI) should ensure that crops are procured from the farmers at the fixed MSP.

Lastly, he said the suspension of all the MPs, who were barred from the upper house for “unruly” conduct, should be revoked.

Also Read: A Blow-by-Blow Account of How the Rajya Sabha Passed the Farm Bills

As protests against the hurried passage of the farm bills escalated across the country, all the eight MPs – Derek O’Brien and Dola Sen (TMC), Sanjay Singh (AAP), Rajeev Satav, Syed Naseer Hussain, and Ripun Bora (all Congress), and K.K. Ragesh and Elamaram Kareem (both CPI(M)) – have been sitting on a dharna against their suspension since Monday. 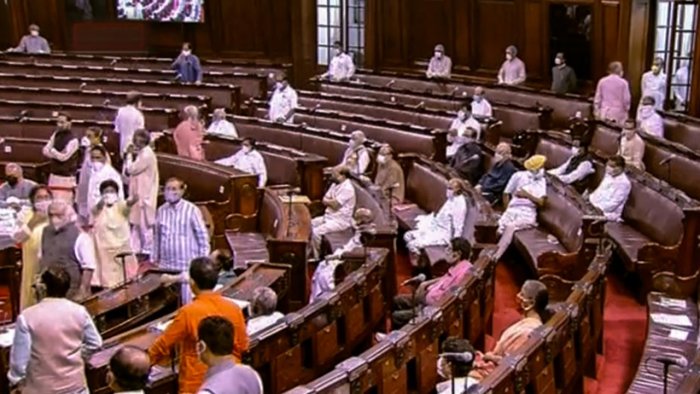 The Rajya Sabha on Sunday as opposition MPs protest the rushed passing of farm Bills during the ongoing monsoon session. Photo: RSTV/PTI

Speaking to The Wire, Ripun Bora said, “We decided to do an overnight sit-in dharna in front of Gandhi’s statue because it is a democratic way to protest. We decided to resort to the dharna because we as MPs are in parliament as representatives of the public. We have to raise the voice of the people in the house, about farmers, youth, everyone against whom injustice is done.”

TMC MP Derek O’Brien also tweeted in protest, “You can suspend me. You cannot silence me.”

Bora, a Congress MP from Assam, said that the entire opposition supports the agitation by the suspended MPs. He added that all the eight MPs have sought an appointment from the president of India to discuss the matter and are waiting for a confirmation from him. So far, President Ram Nath Kovind hasn’t given them time.

Around the same time, Jairam Ramesh, who was also seen as vehemently protesting against the hurried passage of the farm Bills on Sunday, tweeted to list the opposition’s demands.

Here are the 7 reasons why the Congress and like-minded parties are boycotting rest of the Monsoon session of Rajya Sabha: pic.twitter.com/PsfGtnXqGc

The whole episode has now transformed into a competitive political game, with the government under the direct leadership of PM Modi and the BJP hardening their stance on the Bills. While most BJP leaders have said that the Bills were needed for a “21st century India” to boost agriculture, Modi himself tweeted in support of it multiple times.

Also Read: India Needs a Reminder on How Parliament Is Supposed to Function

Alongside its national campaign, the National Democratic Alliance (NDA) has also sought to peddle the opposition protests against the deputy chairman Harivansh, who is a Janata Dal (United) MP from Bihar, as an attack on “Bihar’s pride”.

On Monday, the Bihar chief minister Nitish Kumar, and his deputy Sushil Kumar Modi from the BJP, likened the protests against Harivansh to berating a respected leader from Bihar. The deputy CM even referred to the protests against Harivansh as an assault on the “pride of Bihar”. Nitish Kumar’s comments were more measured, as he left it open-ended by merely criticising “what happened in the Rajya Sabha” on Sunday.

With the polls in Bihar on its mind, the NDA, which reportedly has been facing a strong anti-incumbency stir because of its poor handling of floods, the COVID-19 pandemic, and the migrant labour crisis, has banked on an emotional campaign. It has been invoking “Bihar’s pride” in many of its recent campaigns, including in the tragic death of Bollywood actor Sushant Singh Rajput.

In a similar vein, both Harivansh and Modi have indicated that the protests against the deputy chairman may hurt the “Bihari sentiment”.

On Monday, Harivansh met the suspended Rajya Sabha members in the lawns of Parliament House, where they were staging a sit-in, and offered them tea. The MPs, however, snubbed his gesture, and called him “anti-farmer” and compared his gesture to “tea diplomacy”. They had earlier held him accountable for rejecting the opposition’s call to send the Bills to a select committee for a review or even extend the discussion until Monday. The Bills were eventually passed through a voice vote after Harivansh refused a division of votes on the matter.

Immediately after this episode, Harivansh declared a “one-day fast” to express his anguish over the way the opposition “attacked” him over the issue of the farm Bills. 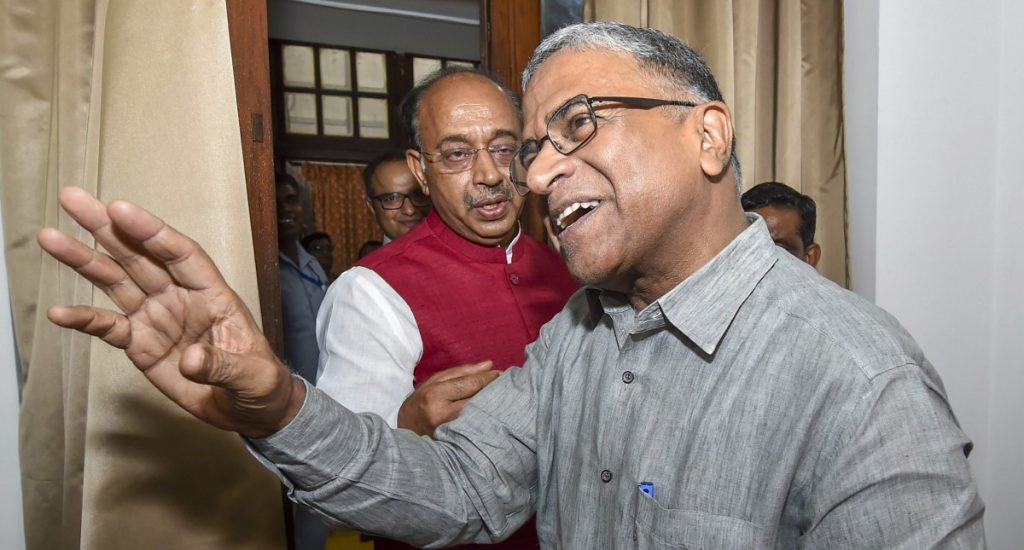 Both Harivansh and the upper house chairman M. Venkaiah Naidu wrote separate letters to President Kovind to inform him about the deputy chairperson’s observation of a one-day fast.

“After what happened on Sunday, I have been extremely anguished, distressed and in mental agony and have been unable to sleep for the past two days. In the name of democracy, opposition members behaved in a violent manner and there were attempts to intimidate the Chair,” Harivansh said in his letter.

“Whatever happened in front of me on September 20 has caused unimaginable loss to dignity of House… The rulebook was torn and thrown at me. Some MPs also stood on the table, used unparliamentary language against me. I kept recalling the entire incident and was unable to sleep,” he added.

Interestingly, he referred to stalwart socialist Bihar leaders like Ram Manohar Lohia and Karpuri Thakur, and said that he hailed from Jayapraksh Narayan’s village. “I learnt a lot from him, I took part in the JP Movement and my political background is from Bihar where the Vaishali Republic is known for democracy,” he said.

In almost a concerted effort, the prime minister was quick to come out in support of Harivansh. “To personally serve tea to those who attacked and insulted him a few days ago as well as those sitting on Dharna shows that Shri Harivansh Ji has been blessed with a humble mind and a big heart. It shows his greatness. I join the people of India in congratulating Harivansh Ji,” Modi tweeted, before invoking Harivansh’s Bihar connection in an additional tweet.

For centuries, the great land of Bihar has been teaching us the values of democracy. In line with that wonderful ethos, MP from Bihar and Rajya Sabha Deputy Chairperson Shri Harivansh Ji’s inspiring and statesman like conduct this morning will make every democracy lover proud.

With the opposition emboldened by the farmers’ protests against the Bills, the Congress has already declared nationwide agitations from September 24. In a rare show of unity, many of the rival opposition parties have come together on the issue. However, it appears that the government, which has only hardened its stance in favour of the farm Bills ever since the opposition parties started protesting, will look to deflect the matter for its electoral advantage in Bihar.

Meanwhile, Union minister Ravi Shankar Prasad told PTI that the government may consider revoking the suspension of the suspended MPs if they apologise for their behaviour in the Rajya Sabha. The opposition MPs have already said that they were at the receiving end of the the deputy chairman’s partisan conduct.

CPI(M) member K.K. Ragesh, for one, said that it is the government which should apologise to them.

“Government should apologise. Not us”-stand of suspended MPs

Meanwhile, political observers pointed out that minister Prasad may be exceeding his brief by speaking for the Rajya Sabha chairman and deputy chairman.

Oh, so Chairman and Vice-Chairman of Rajya Sabha take orders from the Centre? Glad you cleared that up. Very constitutional. https://t.co/bgILyk4YM8

The political battle in parliament appears set for an escalation from here on.