With a Faltering Economy and BJP’s Political Losses, Is the Tide Turning?

The 'vikas' plank has failed and Hindutva is looking frayed, so what will be the strategy for 2024?

A woman walks past a painting of Indian Prime Minister Narendra Modi on a street in Mumbai, January 15, 2021. Photo: Reuters/Francis Mascarenhas/File Photo

The game-changing elections of 2014 were fought on the double axes of vikas, projected as the primary axis and Hindutva as the secondary one. It was also greatly helped by the projected and perceived declining legitimacy of UPA 2 regime in the cacophony of media hype and the Anna Hazare show at Jantar Mantar, sponsored and sustained by the Rashtriya Swayamsevak Sangh (RSS) with a few imaginary statistics implying unbounded corruption thrown in by some constitutional authorities.

Over the past seven years of the Modi government’s unprecedented failure on the vikas front and spectacular success on the Hindutva front has brought into high relief the reality of the double axis; it was vikas that was secondary; social divisiveness was primary. So far, the current regime did appear to have succeeded in getting a substantial segment of Indian society to subordinate its economic aspirations and to be prepared to suffer life’s enormous hardships for the sake of the higher ideal of Hindutva. Of course, the success was duly aided by airtight control over information, severe repression of dissent, and creating fear through government agencies’ midnight knocks or/and mobilisation of ‘non-state’ agencies for attacking unarmed citizens like the ones at Jawaharlal Nehru University and North-East Delhi. Maligning memorably peaceful protests such as at Shaheen Bagh was part of the game, not to forget the massive mobilisation of money power.

But the tide seems visibly turning. Demands of livelihood in terms of ever-growing unemployment, huge losses of small and medium businesses first through the mindless adventures like demonetisation then by the COVID-19, skyrocketing prices, and the indefatigable farmers’ agitation have brought the economy back centrestage. The pandemic has, of course, added to the common citizens’ economic problems, but the government’s neglect of the economy predates the pandemic seen in the sliding GDP since 2014, now running into negatives.

True, one sees no sign of public protests like huge demonstrations that Indian public spaces have witnessed ever since the 1960s and 70s; yet, a silent, less voluble turn is visible in some of the hitherto servile or at least muted media finding its critical voice and being prepared to pay a price for it in terms of government agencies’ raids. The judiciary too is speaking up for the citizens after a considerable silence.

The recent elections in five states, especially in the high-stakes West Bengal election, punched a big hole into the projected invincibility of the BJP electoral machine and opened up spaces for alternatives. For the first time there are irrepressible stirrings within the BJP, unheard of since 2014. The change of several BJP chief ministers midway through their tenure is far from the routine. The stirrings in parliament also fall in place. The Opposition is no longer cowed down by the huge numbers on the other side and is insistent on demanding discussion of problems that are primary for the people: prices, farmers’ agitation, Covid mismanagement, unemployment, as well as for the ‘elites’ like the Pegasus spying, and the government, especially the new, highly educated ministers more than the seasoned ones, fumbling in dealing with it. Calling farmers ‘mawalis’ (ruffians) is how a newly-appointed minister views India’s bread givers. The much touted Rafale deal is also opening up to questions of corruption in France with inevitable reverberations here, the government’s repeated clean chit to itself notwithstanding.

In this milieu, it is reasonable to suspect more than a beginning of the erosion of legitimacy of the current regime. This erosion usually become apparent in many ways—at one time, massive demonstrations used to be a powerful driver of it: Jayaprakash Narayan’s Sampoorna Kranti mobilisation in 1974 was the most devastating challenge to Indira Gandhi’s regime, although there were innumerable others on a smaller though impressive scale that almost all prime ministers had to face. Rajiv Gandhi’s massive majority, thus far unparalleled, in the Lok Sabha could not prevent his loss of legitimacy gradually and silently surfacing after the third year of his tenure in the form of lampooning and generally spreading word of his incompetence as prime minister and of course the (unproven) allegations of corruption. The latter half of UPA 2 came in for this erosion with the BJP preventing parliament from functioning with the late Leader of the Opposition in the Lok Sabha, Arun Jaitley, proclaiming on the floor of the House that disrupting its functioning was part of the Opposition’s democratic rights.

Also read: Between Drone and Pegasus, the Latter’s Flight May Be the More Fatal to India

Demonstrations have been visible during Narendra Modi’s rule — and these have been led not by politicians but the people. He, however, has adopted the policy of paying no heed to the protests and not being answerable to anyone in parliament or outside; it worked until now by virtually silencing dissent and even friendly suggestions from anyone outside his circle of select few. The pandemic also came to his aid in creating the ecology of silence.

The present opening up of voices, hard-hitting like the exposure by some brave souls in the media of the utter mismanagement of the pandemic, the scene of thousands of dead bodies floating in the Ganga after claims of the prime minister of vanquishing Covid before any other country, the loss of thousands of livelihoods at the lower strata, the series of bails to most of the accused in the North-East Delhi riots cases due to court-certified shoddy investigations by the police, functioning directly under Amit Shah’s ministry, the incessant lampooning of the government and especially the prime minister in the social media and small news channels and not least the Opposition’s resolve to take on the government head on in parliament are signs that can be ignored only at one’s peril. 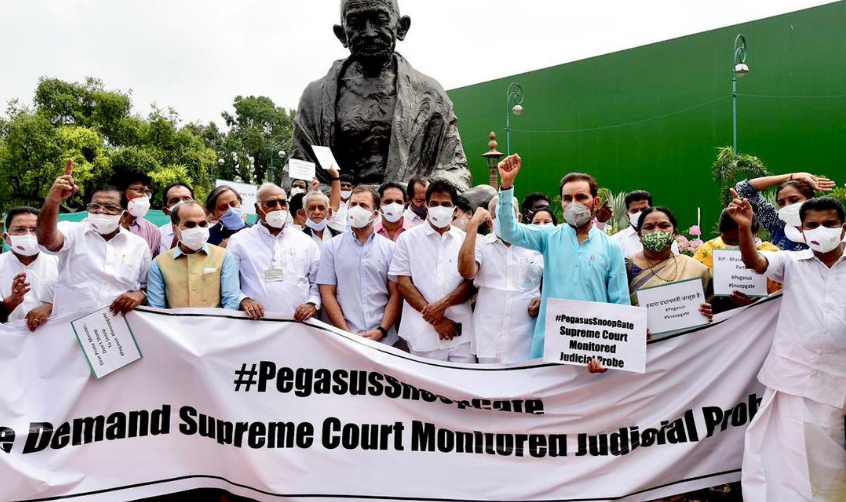 Are we reading too much in this small opening? Can’t be sure either way. The reports of Opposition parties’ realisation that the 2024 election is a do-or-die fight is a sign that it is unlikely to be a walkover for the BJP, even as there is still a long way to go. The calls that the Opposition must start preparing for 2024 from now itself is a significant lesson learnt from the BJP which begins preparations for the state or national election two years or more ahead of it.

As it is, BJP has by and large run out of its options, with the vikas plank having fallen flat. Perhaps the only vikas it will have been left to show off at the end would be the wrecking of the breathtaking heritage and beauty of Raj Path. If not Modi then Who, which fetched it handsome dividends in 2019 will have become greatly subject to diminishing, perhaps even diminished, returns. Its Hindutva boast has also been sullied a bit both by the floating bodies in the Ganga and the exposure of corruption in land deals in Ayodhya, although the boast is unlikely to die down. A massive communal conflagration á la Gujarat 2002 is not an unimaginable scenario in combination with the equally massive celebration of the building of the Ram temple. This will be the last resort option.

BJP might also hope to receive help from the Congress if the venerable old party in its arrogance refuses to tie up with others, barring on the plank of ‘you support us to wage a united fight’. The national scenario as already enunciated by a few leaders is that an Opposition front without the Congress will remain weak and with Congress on its terms is unlikely to come through. That looks like the best case scenario for the BJP, although an open-ended one for the nation.