The debate over the functioning of the EC has been so high-pitched that it even forced former president Pranab Mukherjee to express his concern over alleged security breaches in strongrooms. 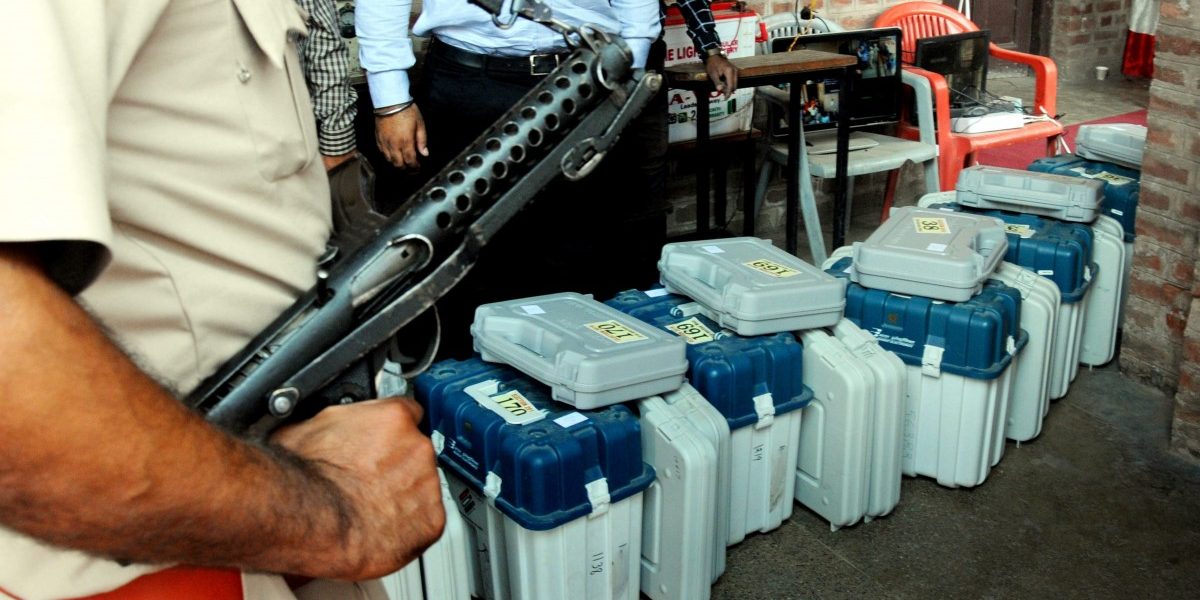 Police officers guard EVMs in Amritsar on the eve of the seventh phase of polling on May 18, 2019. Credit: PTI

New Delhi: Even as analysts continue to point out various discrepancies in the exit poll results, reports of possible security breaches in EVM strongrooms have started pouring in.

In many places across north India, workers of opposition parties alleged that unauthorised vehicles were allowed to enter the premises of the counting centres where EVMs are currently stored. In some other places, political workers said that the EVMs were brought to counting centres without security. There are also reports of official delay in depositing the EVMs in strongrooms.

In Ghazipur, Uttar Pradesh, opposition party workers had to sit on a dharna to get more security forces deployed at the agricultural mandi.

Speaking to The Wire, Samajwadi Party leader Umar Ansari said, “Our workers saw multiple SUVs owned by the local BJP leaders entering the premises of the mandi. On the other hand, our workers are not being allowed within 50 metres periphery of the building. Despite complaints to the authorities here, no action was taken.” Samajwadi Party-Bahujan Samaj Party joint candidate from Ghazipur Afzal Ansari stages a protest, alleging that the administration had attempted to change the EVMs, outside the strongroom in Ghazipur on May 20, 2019. Credit: PTI

This forced, Ansari said, the opposition workers to sit on a dharna. Almost 12 hours after they protested, the EC deployed forces in the building and decided to give passes to one person from every party to monitor the strongroom.

Similar incidents of security breaches were reported from Chandauli, Jhansi, Mau in Uttar Pradesh and a few constituencies like Saran in Bihar.

The EC, meanwhile, delayed its response but eventually said all the matters were resolved. In most cases where people had captured videos of EVMs being deposited late or without security, the poll body said that those were reserved EVMs which were not used for polls.

However, many have pointed out that even the reserved EVMs, according to the EC’s own rules, should have been deposited along with the ones which were used.

Here is the EC guidelines for the storage and transportation of reserved EVMs during and immediately after the election.https://t.co/U8LQuErcDK pic.twitter.com/wGzYeOenjk

While most experts have said that EVMs cannot not be tampered with, many in civil society say questions regarding the safety of the EVMs are very valid.

I don’t understand why 1) Valid questions about the safety and integrity of EVMs fall under ‘conspiracy theory’ and 2) Why, in the face of reports of missing EVMs, and of EVMs being moved without explanation from the EC, journalists are not raising hell. #ElectionResults #EVMs

At a time when there have been strong calls for the “back to ballot” system, it is the duty of EC officials, who have been strongly opposed to the demand, to ensure maximum transparency to belie any suspicion over EVMs.

Former Chief Election Commissioner S.Y. Quraishi seemed to concur with this view. He thought that the EC, instead of giving vague replies, should clearly state their findings in each of these complaints.

You should simplify it. State in one line what’s the finding. https://t.co/h7evx46OIY

Why is EC not clarifying what the facts are? Speed is extremely important. https://t.co/XaHSnpE497

Over the past two months, the EC’s functioning has been frequently questioned. The poll body is battling allegations of being partisan towards the ruling party BJP, over its lackadaisical approach towards possible poll code violations and its opaque functioning.

The debate over the functioning of the EC has been so high-pitched that it even forced former president Pranab Mukherjee to express his concern over various reports of security breach in strongrooms.

It is perhaps time for the ECI to realise that only with prompt and convincing interventions can it dissipate all doubts.