Large sections of Left/Communist Party of India-Marxist supporters are voting for the BJP, just to teach Mamata Banerjee a lesson. A BJP supporter wearing Modi's mask at a rally in Bengal. Credit: The Wire

Kolkata: After the Election Commission slashed Bengal’s campaign time by 24 hours, Prime Minister Narendra Modi held his last rally at Dum Dum Central Jail Maidan on Thursday evening. He addressed “Didi” in his usual dramatic tone, warning that her time in Bengal was up. He invoked Mamata Banerjee’s quintessential slogan, Jai Maa Kaali, in the same breath as he did Jai Shri Ram. He then said, “Youths are being jailed just for chanting ‘Jai Shri Ram’ and ‘Jai Maa Kali’.”

Those familiar with Mamata Banerjee know her to be an ardent worshipper of goddess Kali.

At the back end of the rally, a man went around distributing postcards. He handed one to me. “Write Jai Shri Ram on it and drop it in the nearest post box,” he said. The postcard had Banerjee’s residential address written on it: 30B, Harish Chatterjee Road, Kolkata – 700026 (W.B.) All around me chants of Jai Shri Ram filled the air.

Strangely, after almost a two-hour-long wait in the heat, large numbers of people started leaving the ground as soon as Modi began speaking. Puzzled, I asked a local resident sitting next to me why they were leaving. “They came simply to see him,” he replied. 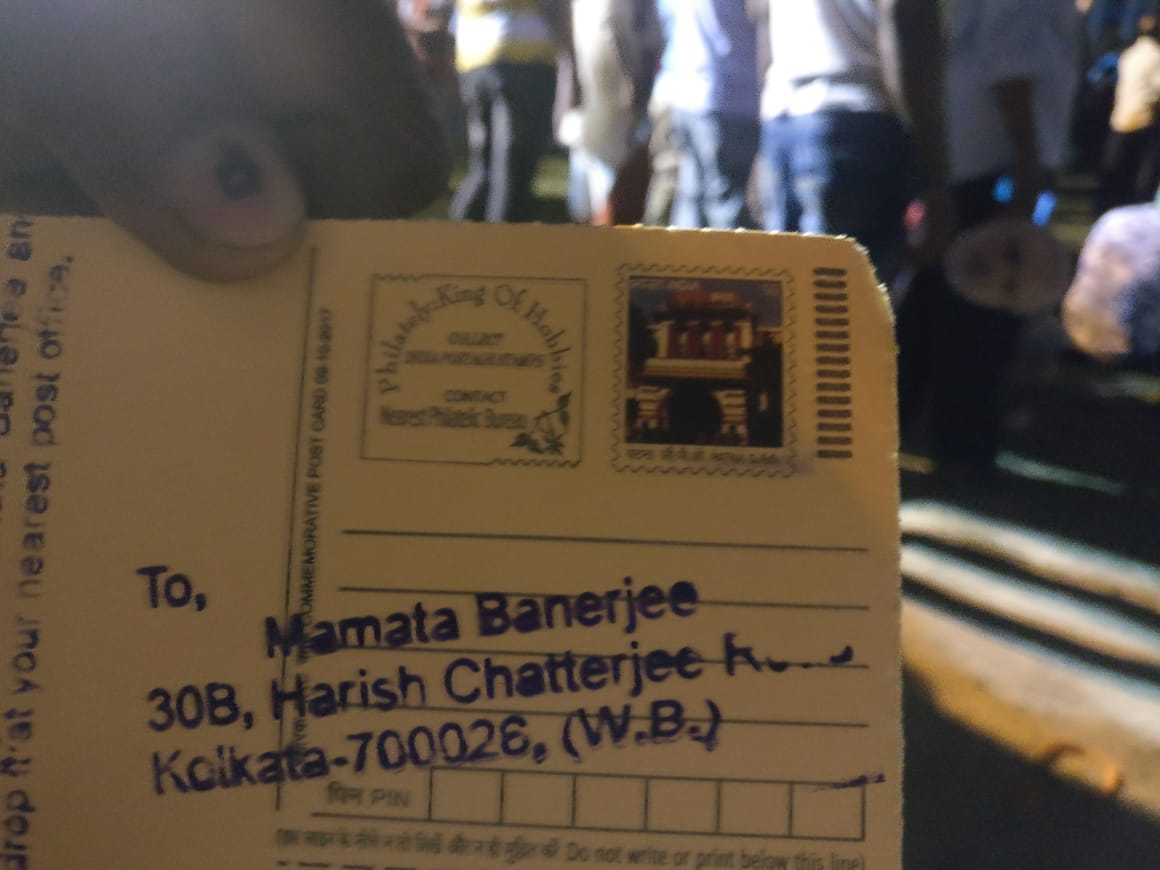 The postcard distributed at a BJP rally in Kolkata. Credit: The Wire

Standing there, images of a rally addressed by Banerjee at Behala Chowrasta just a day ago, floated in my mind. A crowd, spellbound by a fragile woman, clad in a white saree, pacing up and down the stage, reminding people of the heritage of Kolkata and Bengal. The heritage of Vidyasagar and Rabindranath Tagore.

That was a different kind of meeting, held the same evening when rallyists in a procession led by BJP president Amit Shah vandalised the statue of Vidyasagar in the college named after the legendary Bengali personality. The following day, blaming Trinamool Congress workers for the act of vandalism, Modi – with his characteristic desire for big things – promised to build a huge statue of Vidyasagar.

Caught between different political imaginations, Kolkata – if not Bengal as a whole – is changing. The former red bastion, whose infrastructure has now been painted white and blue at the dictates of Banerjee, is now going saffron in a large number of places. Large sections of Left/Communist Party of India-Marxist (CPI(M)) supporters are voting for the BJP, just to teach Banerjee a lesson.

The CPI(M) is barely visible on the ground. In its place is the once non-existent and now on the upswing Bharatiya Janata Party (BJP).

On Tuesday, Sayantan Basu, BJP candidate from the Basirhat Lok Sabha constituency – which polls on May 19 – said people trying to capture booths on election day should be shot to death. Caught on video, Basu threatened, “If goons try to capture booths on polling day, I will tell the CRPF that their bullets must go through the heart and not at the feet.”

On a street corner in Santoshpur, a neighbourhood in South Kolkata, a group of young and middle-aged men were discussing politics. The state’s usual poll calculus seems to be going all awry. A city where politics is to its people what water is to fish, Kolkata can’t stop talking about elections. The city is holding its breath, waiting for May 23. The early evening humidity is, typically, killing. But a scorching sun has never been a deterrent to Kolkata’s legendary street addas. Not in ordinary times. Nor in extraordinary ones, like the times we seem to be living through.

During Tuesday’s evening adda near Santoshpur lake, local residents, with varying political leanings, fumed over Basu and Shah’s remarks. Part of the Jadavpur constituency, Santoshpur, with its large refugee population, used to be a Communist stronghold. That narrative and those alliances have come to wear thin.

“I can see in my local area (Santoshpur municipal ward number 103) that the maximum number of former CPI(M) activists are now with the BJP. The erosion started after 2011,” says Lab Sengupta. Does this mean the CPI(M) has lost the political will or capability to function without being in power? “Definitely,” Sengupta replies.

Suman Sengupta, another local resident, has a somewhat different take on the subject. “The committed CPI(M) voter in ward 103, who has stayed loyal to the party, belongs to an older generation, starting from 60 years. That’s one thing. The other thing is that even if the CPI(M) has an edge in the Santoshpur segment of Jadavpur constituency, CPI(M) votes are going to the BJP in other Jadavpur segments like Baruipur and Sonarpur.” Sengupta underlines the generational political shift the state is going through: “Voters in the 20-35 age-group, even in traditional Left families, are leaning towards the BJP. They haven’t seen either Siddhartha Shankar Ray’s regime or Nandigram.” 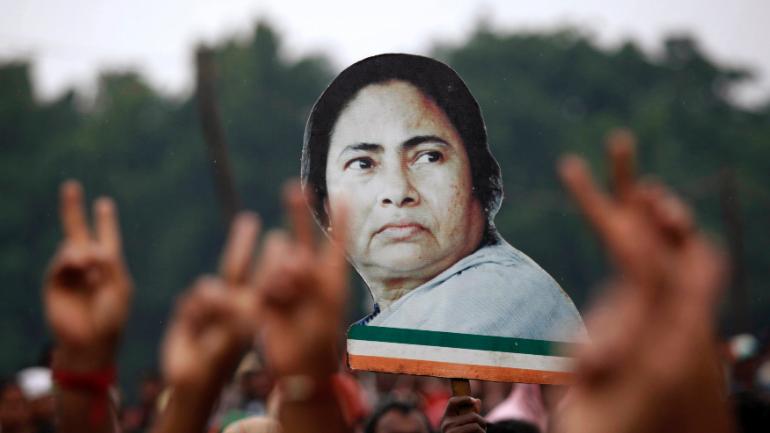 As late as the 1970s, Santsohpur used to be a marshy land, dotted with agricultural fields. Today, it’s a bustling, vibrant locality. Streets and alleys are well lit; footpaths neatly paved. Even a quaint coffee shop and pubs have come up in the locality. Not just that. Significant attitudinal changes are visible in an area which, till not so long ago, would have worn its social conservatism on its sleeve.

“If you walk around the Santoshpur lake in the evening, you will find women smoking and couples being intimate. Nobody gives them a moral lecture,” says Suman. This was unthinkable even during the CPI(M) era. When the party was in power, it would interfere in disputes between couples, in family matters and personal issues more generally. “If the BJP starts gaining influence, they, too, will start dictating personal choices and interfering in personal life,” Sanjay Pramanik, another Santoshpur resident who works in a printing press, tells me.

However, the overwhelming domination in the political, social and cultural life of the state that the CPI(M) exercised for over 30 years is what renders its sudden disappearance so perplexing. But you can perhaps acquire some sort of clarity by talking and listening to people with different shades of political affiliations.

Tapas Bose, former whole-timer in the CPI(M) and its Bengal state committee member, quit the party sometime in the late 1990s. He regrets that the CPI(M) did not ask its followers and sympathisers to categorically oppose the BJP in these elections. In his personal capacity, he is trying to convince those sympathetic to the Left and who want to vote the BJP in this election to not make that dangerous choice. Yet, it’s Mamata Banerjee who he blames for the party’s inertia and invisibility on the ground.

“Why did Mamata Banerjee not allow the opposition to function? Party officers were destroyed, workers threatened. When I talk to the poor people, they tell me how TMC workers are extorting money from them, terrorising them,” Bose tells me.

How the current situation is different

But the culture of political and financial extortion began during the CPI(M)’s reign. Is the current situation, then, not a continuation of the past rather than a new evil introduced to Bengal’s political culture? “I am not saying all this did not happen during the CPI(M) rule. But it has now been magnified a thousand times,” Bose said.

Left-sympathetic hawkers selling their wares on both sides of Rash Behari Avenue echo the same view. “Political violence or extortion – what it was then – was structured. Now it’s unstructured violence, much worse,” according to one person.

But most of the Santoshpur residents I spoke to do not buy that argument. “The fact is that Mamata Banerjee and not Narendra Modi is the main enemy of the CPI(M),” said Raja Banerjee, a Trinamool sympathiser. 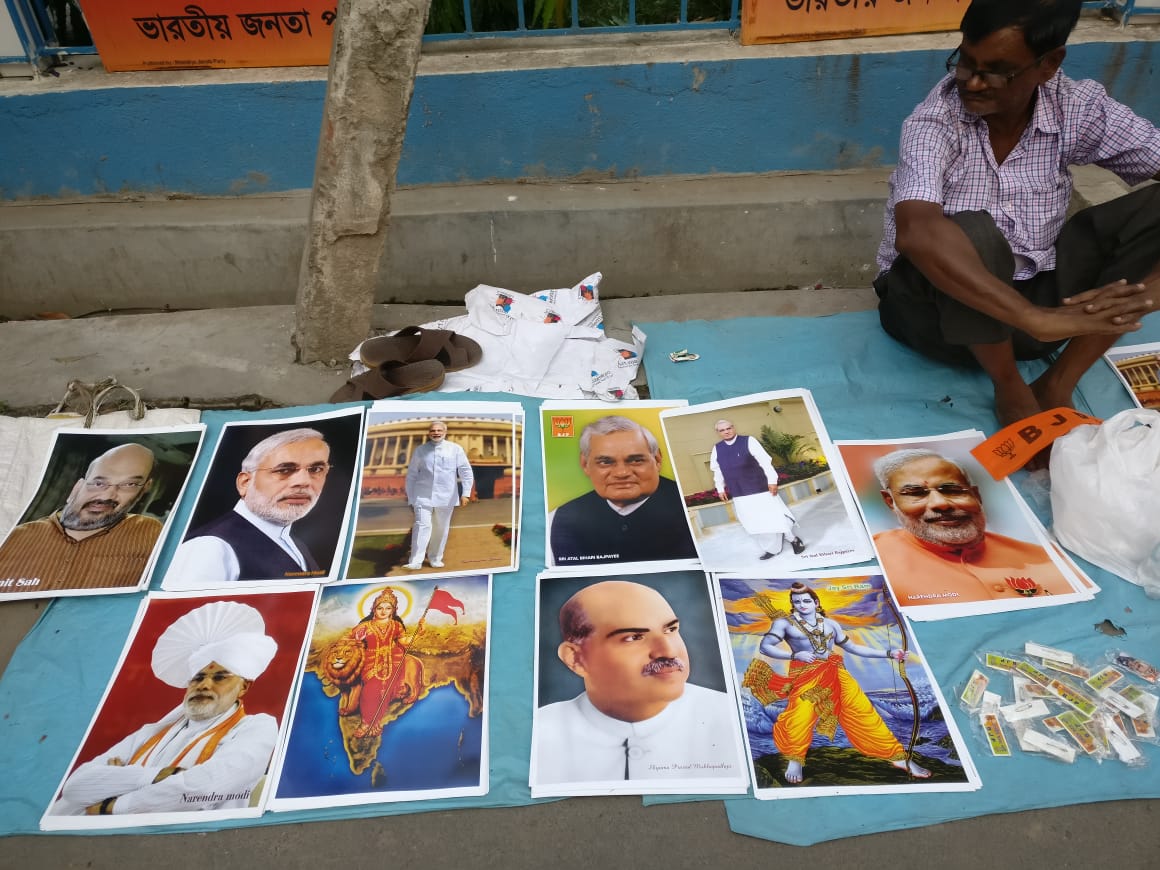 Posters of BJP leaders and ideologues being sold at a rally in Kolkata. Credit: The Wire

His sense of this political alignment is borne out by a lot of people I speak to on the ground.

Breaking his long silence, Bengal’s ailing former chief minister, Buddhadeb Bhattacharjee of the CPI(M), in an interview to the party mouthpiece, Ganashakti, last week, urged people not to vote for the BJP. The lukewarm appeal couched as a warning to not “jump from the frying pan to the fireplace,” came a little too late and hardly displayed much vigour to enthuse party loyalists into voting against the BJP.

Whatever the BJP’s ultimate tally from Bengal turns out to be, the CPI(M) will have, no doubt, contributed a great deal to mainstreaming a marginal political outlier in the state. The party, as C.P. John, the general secretary of the Communist Marxist Party (CMP) in Kerala, has rightly said, has committed a second historic blunder.

The first time was 1996, when the CPI(M) refused to allow its then Bengal chief minister Jyoti Basu to become prime minister of the third front-led United Front government. Basu himself said that the party’s negative decision was tantamount to committing a “historic blunder.”

One wonders today what India’s present might have looked like had someone like Basu been prime minister, even for a while. At the same time, one gets the feeling that the price paid for the blunder in 1996 will pale in comparison to the costs the country and its people might have to bear after May 23.

Note: In an earlier version, Sanjay Pramanik, a resident of Santoshpur, was wrongly identified as Sanjay Das.