“People here don’t talk about elections. We remember our dead. They are our legacy.”

Pulwama/Shopian: In the recently concluded elections in the Valley’s two Lok Sabha constituencies, Baramulla and Srinagar, the poll campaigning was intense – and bitter too. The restive southern segment of Anantnag, which goes to polls next, stands distinctively apart.

Not only is the election atmosphere missing altogether in the region, but even the occasional ‘rallies’ by politicians are also organised in fortified dak bungalows and town halls of Anantnag and Kulgam districts – in a desperate bid by parties to give some semblance of an election in the constituency, the centre of Kashmir’s renewed militancy.

For each such programme, the workers are bused to the venue and frisked thoroughly before they are made to listen to the speeches of their leaders. After that, they quietly disappear into the lanes.

In the other two districts of the constituency, Pulwama and Shopian, none of the parties has held any poll-related activity in public – not a single one – ever since the election dates were announced on March 12. In fact, the local representatives of rival parties hold closed-door meetings with small groups of workers to strategies for the election.

Unlike in northern and central Kashmir, the roads and streets in the south are colourless this poll season. There is no competition among supporters of rival parties to deck them with buntings, posters, hoardings – the symbols of an election – and pictures of their favourite politicians. In fact, there are no supporters to be seen at all on the roads.

“They (mainstream politicians) don’t dare to venture here,” said Javaid Ahmad – who this reporter offered a ride to from his native village of Wurwan up to Pulwama town. Then, justifying his statement, Ahmad added that for past over three years, none from “their” side have been seen in public, in the town or in any of the villages.

His mention of mainstream leaders as “they” speaks volumes about the growing chasm between local population and politicians in the region and could well explain the missing poll fervour.

“People here don’t talk about elections. We remember our dead, young and old, students and teens. They are our legacy,” Ahmad, who works as a salesman at a shop in the main market of the town, responded to a question.

Known as the rice bowl of Kashmir, Pulwama includes over 327 villages with a bustling market. It also includes Pampore town – located on Srinagar-Jammu highway – which is known for growing saffron, world’s costliest spice.

Stranded tricks on the Jammu-Srinagar highway on April 7, 2019. Credit: PTI

In the past three years, however, the stories coming from Pulwama have been about death and destruction. Dozens of young educated men, who disappeared from their homes to pick up guns, have gotten killed in gunfights with security forces since the uprising in the summer of 2016. Like other districts, Pulwama too has seen civilian causalities during these encounters, occurring when people rush to help trapped militants escape.

While the number of gunfights has now gone down, the ground continues to swell with anger. “Everybody knows why there is no poll activity here. It doesn’t need any explanation,” a senior leader of a regional political party told this reporter at his residence in Pulwama.

Though he described himself as a party “loyalist”, this election he has chosen “to stay quiet”.  “These are hard times. There is no mainstream politics here. In fact, it has long died in the district,” he said, putting part of the blame on “leaders from Srinagar” too.

Since 2016, political parties have been pushed to the margins in the south. None of the senior leaders have visited the hinterland fearing peoples’ ire, limiting their activities to official spaces only, like dak bungalows and government buildings.

“There has been a complete disconnect,” the political leader tried to reason. “May be visits by leaders and occasional meetings with workers could have helped.”

Not on the people’s mind

But his assertion has no takers in the villages where people see mainstream politics as a “disgrace”. Take the example of Karimabad, a village located just 8-10 kms from the town. On Friday (April 19), a group of youth sat on a roadside debating the ban on civilian traffic on Srinagar-Jammu highway and its impact on life in villages dotting state’s principal road.

Will people vote in this village, I asked them. “Vote for whom…those who are responsible for filling these graveyards?” one youth who identified himself as Iqbal responded, pointing towards a local graveyard.

Karimabad hogged headlines in March 2015 when a policeman from the village, Naseer Ahmad Pandit, escaped along with two rifles. Three other boys from the village, including, Afaq Ahmad, went missing the same day and joined militants along with Pandit. Both Pandit and Ahmad were among 11 militant who later posed with young rebel commander Burhan Wani in an iconic picture in 2015.

The duo was later killed in separate encounters and lay buried in the Karimabad graveyard along with several other militants from the village. “Nobody comes to ask for vote here. They know what they will get in response,” said Iqbal as a group of youth burst into laughter.

This anti-poll atmosphere runs through the surrounding villages. In Drubgam, the native village of slain militant commander Sameer Ahmad Bhat, alias Sameer Tiger, banners of fallen militants still hang in market and streets. Sameer, the long-haired youth with piercing eyes, and the main recruiter for Hizbul Mujahideen was killed in an encounter last April.

“The lines have already been drawn. Indian politicians are banned in this part of the world,” Mushtaq Ahmad, a neighbour of Sameer told The Wire.

In neighbouring Shopian district, at least 57 militant were killed in gunfights last year. In its villages, pro-freedom graffiti and names of militants written across boundary walls of houses and shop shutters, although withered, remain as the most visible sign of the conflict. 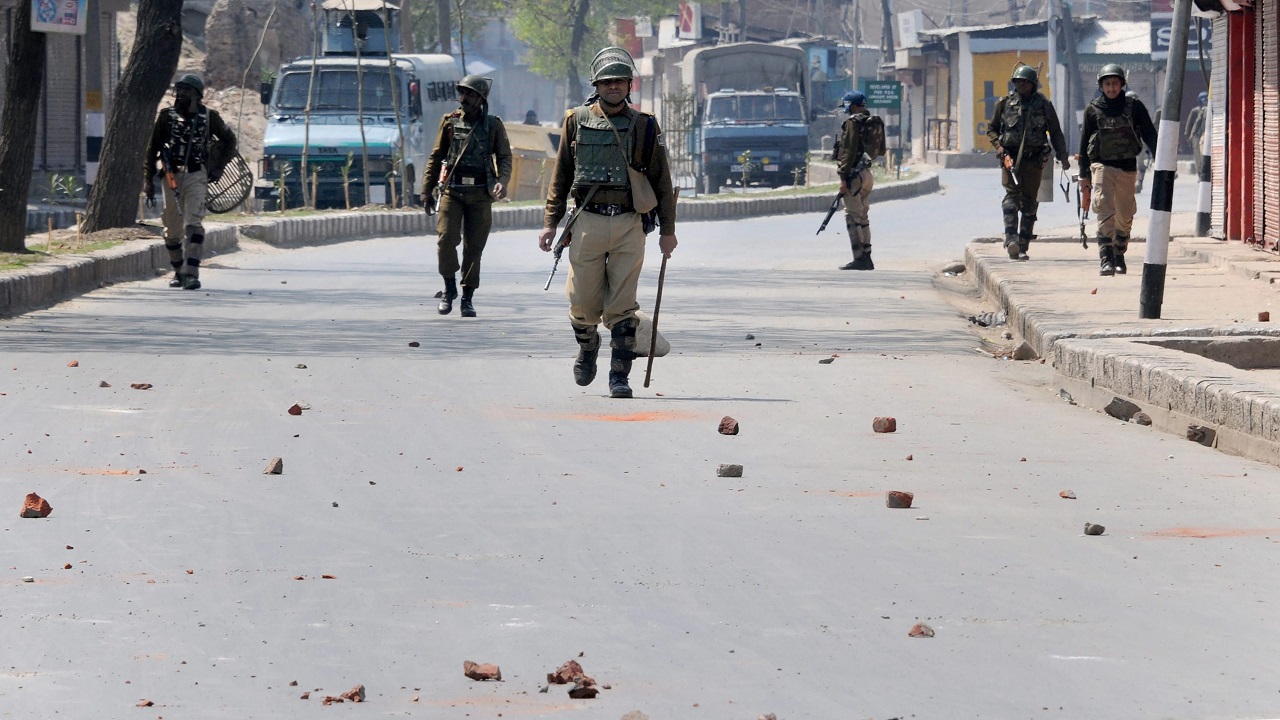 ‘We can’t betray our heroes’

Tucked deep inside orchards, around 12 kms from the Srinagar-Jammu highway, one such village is Heff – the native place of slain district commander of Hizb, Saddam Padder. Lashkar-e-Taiba district commander Wasim Shah alias Osama, who remained active for six years also hailed from Heff. In the past three years, at least seven militants from Heff have been killed in gunfights.

Today, these militants have become a part of folklore, and people, young and old, engage in discussions about their decision to give up comforts and “sacrifice lives for a cause”.

Also read: Has Kashmir’s Militancy Entered its Most Lethal Phase Yet?

“They are our heroes. How can we betray their cause and vote for those who brought miseries in our lives?” a youth, Ishfaq Ahmad said. He said he was a close friend of Shah.

Like Pulwama, local politicians in Shopian don’t come out in public to campaign for their candidates, and senior leaders from all parties have not even entered the district that sits in the lap of Pir Panjal mountain range and is one of the more prosperous districts of J&K. The fruit industry drives the economy of people here – hence, the name the ‘apple bowl’ of the state.

In the renewed Kashmir militancy, Shopian has emerged its epicentre. People here openly espouse the separatist cause and young boys talk proudly of their “heroes” from the neighbourhood who have joined the ‘tehreek‘ – the resistance movement – or lost their lives in it.

Aijaz Ahmad Mir, the former legislator of the PDP who represented Wachi constituency of the district, candidly acknowledged the missing election atmosphere. “The situation was not conducive for polls in Kashmir,” he tried to argue, sitting with a few dozen workers at his home to strategies for the election.

His party president, Mehbooba Mufti is contesting the seat in what is being described as the most decisive battle of her career. She is facing a challenge from Congress’s G.A. Mir and NC’s Hasnain Masoodi, a retired high court judge. 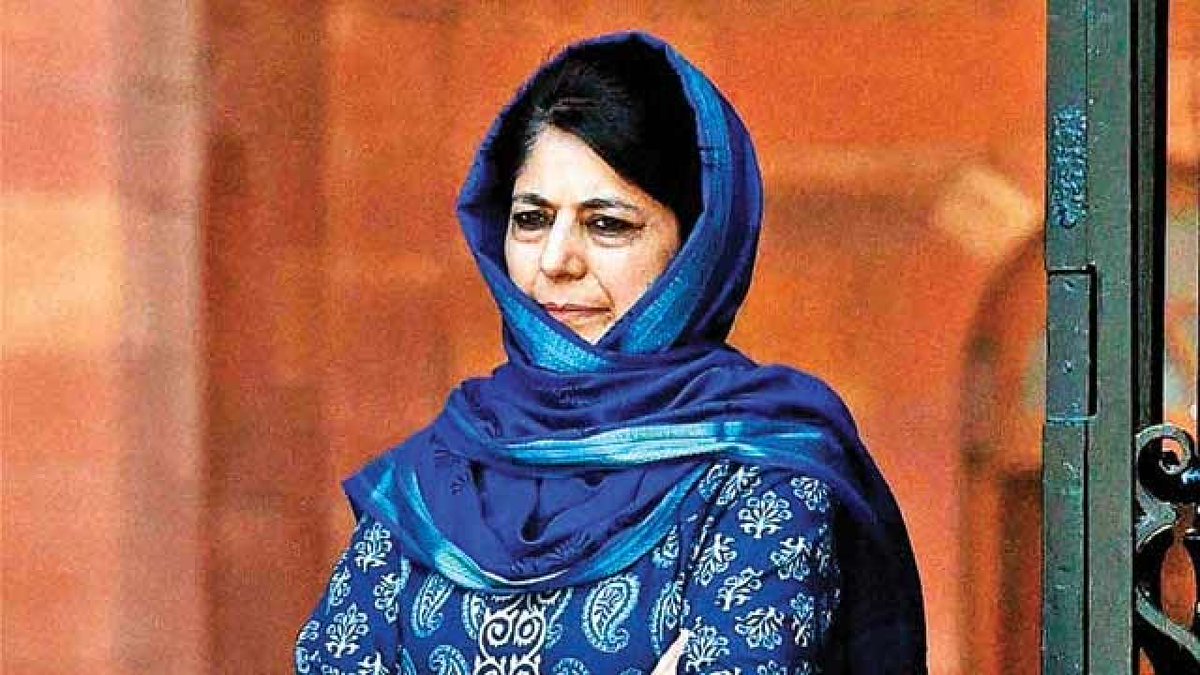 “There is also fear of militants,” Mir said, referring to the latest threat by Riyaz Naikoo, Hizb’s operational chief and most wanted militant in Kashmir.

When asked why none of the parties including PDP has held even a single rally in the district, Mir said his party was planning one next week.

But across the district, which has been categorised by security agencies in three zones – Zainapora, main Shopian and Keller – mainstream politics is the least talked about during discussions among people.

Will it be another first?

The situation is no different in Kulgam where “electioneering” hasn’t moved beyond the four walls of the town hall. In areas like Redwani, Khudwani, Qaimoh and Yaripora, the 2016 uprising and the killings, of both militants and civilians, are still fresh in people’s memories.

“We stand with our martyrs and not the traitors who remember people in times of elections only,” said Zareefa of Rampora, a village known by locals as “Shuhadapur” (the village of martyrs).

Also read: Anger Brews in Kashmir After Militants’ ‘Unpardonable’ Use of Young Boy as Human Shield

Among the militants from the area is Hizb commander Muhamad Abbas Sheikh. The Sheikh family has seen 18 of its men join militancy and get killed during the past 27 years.

But it is not only the “memories” of recent years, the sweeping arrests made by the authorities across south – many among them in Kulgam – in recent weeks have also added to the fresh wave of anger against the state parties.

These arrests are seen as being in line with the “plan to ensure smooth voting” in the south where authorities couldn’t hold a by-election to the seat for three years after it had fallen vacant in April 2016. The process had to be later cancelled, a first in the electoral history of Kashmir.

This simmering anger and the experience of 2016 may well have prompted Election Commission to divide polls to the constituency in three phases. While Anantnag will vote on April 23, Kulgam will go to polls on April 29. The elections for twin districts of Pulwama and Shopian are slated for May 6.

Will southern Kashmir write another first in the electoral history of Kashmir – an election devoid of a full-fledged campaign? “We are ready to ensure all arrangement for any political parties intending to hold the (election) programme anywhere in the constituency, but so far we haven’t got any such requisition from anyone,” a senior police official told The Wire.