Sadhvi Pragya Was First Arrested in Terror Case by BJP Government, Not Congress

The BJP candidate for Bhopal was charged in 2008 by the Madhya Pradesh police with the murder of RSS activist Sunil Joshi, whose name figured in a number of terrorist acts against Muslims. 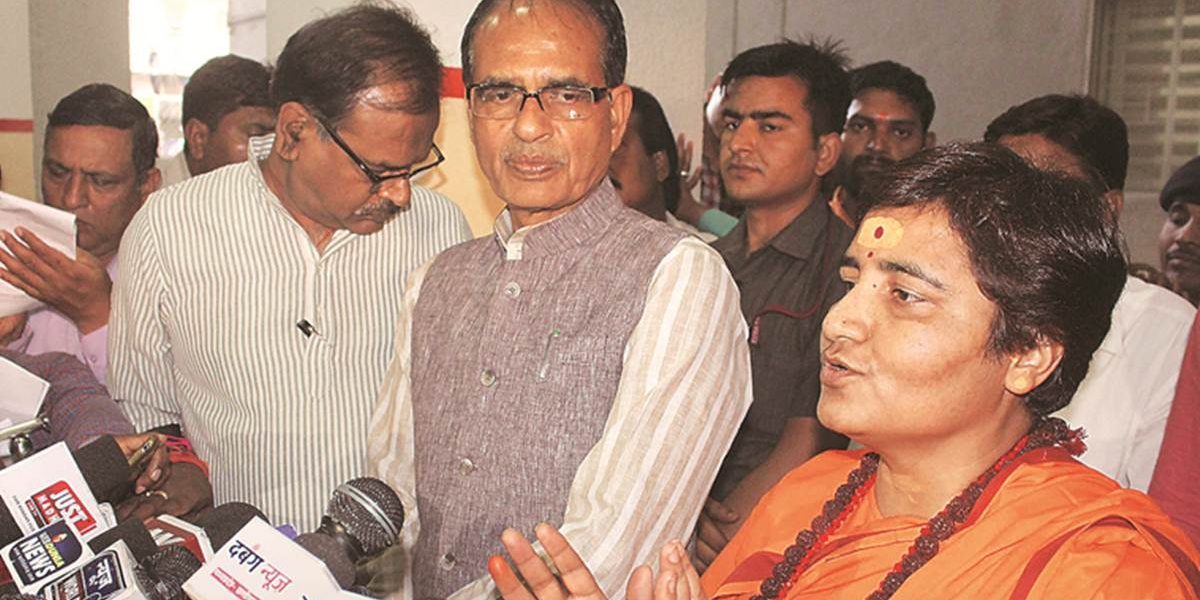 Bhopal: While announcing Malegaon bomb blast accused Sadhvi Pragya Thakur as the BJP’s candidate for the Bhopal parliamentary constituency on Wednesday, former Madhya Pradesh chief minister Shivraj Singh Chouhan described her as someone who was born to keep the nation secure.

Other BJP leaders have described Thakur as a victim of a Congress conspiracy to “defame Hindus”. In a campaign speech in Wardha, Maharashtra earlier this month, Prime Minister Narendra Modi said Hindus would never forgive the Congress for this and would punish the party for the ‘Hindu terror’ slur.

The irony is that the Sadhvi – seen by her critics as an exemplar of Hindutva extremism and by the BJP as the poster child of the defamed Hindu – was first accused of a terrorism-related crime by the BJP state government in Madhya Pradesh when Chouhan was chief minister.

In September 23, 2008, Chouhan’s own police arrested Sadhvi Thakur and eight others for their alleged involvement in the murder of RSS man Sunil Joshi in Dewas district of Madhya Pradesh.

“While announcing her candidature, former CM Chouhan forgot that the person is accused of the 2008 Malegaon blast and is out on bail, so how could she be the protector of the nation?” asked Congress spokesperson Pankaj Chaturvedi.

He further said, “Shivraj should not forget that his own police had arrested her twice for her alleged involvement in Sunil Joshi’s murder in 2008 and 2011, respectively. Shivraj should explain how a terrorist and murder accused can protect and strengthen the nation?”

Sadhvi Thakur has been pitted against Congress heavyweight Digvijay Singh from the Bhopal constituency.

Since 1989, BJP has never lost Bhopal – which has a sizeable Muslim population. Digvijaya Singh was asked by his party colleague, chief minister Kamal Nath, to contest from tough seats like Bhopal or Indore, where the Congress hasn’t won in years. Digvijaya Singh accepted the challenge.

Sunil Joshi, whose name figured in the Mecca Masjid, Samjhauta and Malegaon blast cases was killed on December 29, 2007 in Dewas. On October 23, 2008, Dewas police arrested Thakur and others in connection with the murder case. However, on March 25, 2009, the police closed the case on the order of Dewas SP and Thakur, along with all other accused, was released.

Joshi had been chargesheeted by the National Investigation Agency (NIA) in connection with the 2007 Samjhauta Express train blast case. He was shot dead on December 29, 2007 when he was walking back to his hideout at Chuna Khadan locality in Dewas town of Madhya Pradesh.

A year later, on July 9, 2010, the Madhya Pradesh police reopened the murder case and filed a chargesheet alleging that Sadhvi Thakur – arrested in the Malegaon blasts case – and four others had killed Joshi fearing he might expose the entire conspiracy from Samjhauta to Ajmer blasts.

On the basis of the chargesheet, police issued an arrest warrant against Thakur on February 26, 2011, however, she was already in jail due to her alleged involvement in the Malegaon bomb blast which claimed six lives and left 100 people injured.

During this time, the MP police arrested the other accused in connection with the case from Rajasthan, Gujarat and Madhya Pradesh. In 2011, the Indore high court transferred the case to the NIA.

In the 432-page chargesheet filed before judicial magistrate Padmesh Shah, the police said that RSS activist Sunil Joshi was eliminated by fellow Hindu hardliners, including Malegaon blast accused Sadhvi Thakur for his “high-handedness and the fear” that his arrest would unmask those involved in explosions in several parts of the country.

The chargesheet further state: “Sadhvi was peeved with Joshi as he had personally misbehaved with her and ‘his overall behaviour was something not expected by a woman'”.  The chargesheet also contains statements from 124 witnesses, according to a March 2011 News18 report.

The chargesheet against Thakur, Anand Raj Kataria, Harshad Solanki, Vasudev Parmar and Ramchandra Patel, Mehul and Rakesh was filed under various sections of the IPC including 302 (murder) and 120B (criminal conspiracy) besides the Arms Act.

According to the document, another reason that provoked the accused to kill Joshi was the “ill-treatment” he meted out to Harshad, Mehul, Rakesh and Ustad – involved in the Best Bakery case in which 14 were burnt alive in Vadodara on March 1, 2002, at the height of post-Godhra communal frenzy in Gujarat. The four, who were hiding with Joshi in Dewas, were often abused by him, it said.

The chargesheet also claims that on the day of Joshi’s murder, Thakur was in Indore and her mobile call records show that she was in constant touch with the accused.

After Joshi’s death, Thakur emerged as a major suspect after his relatives claimed she had come to their house on the day of the murder and had taken away his suitcase. She was also seen in the hospital where Joshi’s body was brought.

Three years later, on August 19, 2014 – just months after Narendra Modi become the prime minister – the case was again transferred to the Dewas district court. In September 2015, the Dewas court framed charges against eight people, including Thakur – who was charged under section 120 (B) (criminal conspiracy) and other relevant sections of the IPC.