Why the BJP’s Hindutva Experiment Failed in Kerala

For opposition parties in the rest of the country, Kerala's voting pattern holds rich insights into effectively countering the BJP electorally. 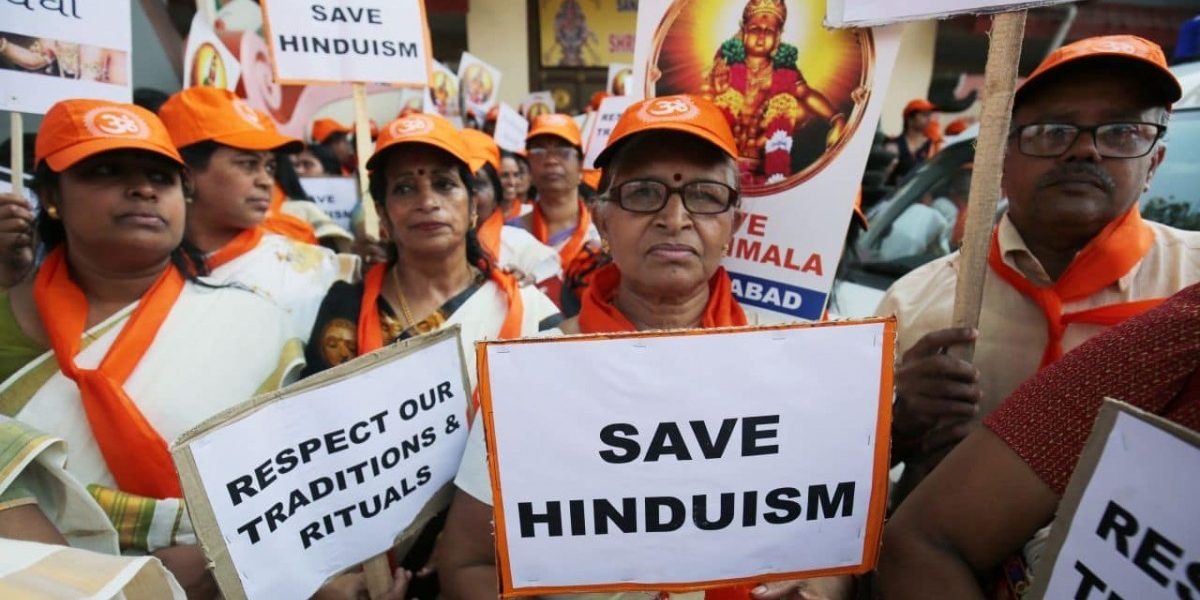 The BJP could not get a single candidate elected in the state and could increase its vote share by only two points to 12.93%. Credit: Reuters

This election cycle, the Bharatiya Janata Party (BJP) in Kerala followed the standard protocol to replicate the Hindutva experiment that had catalysed the party’s rapid rise in the north. By the book, the party pivoted its campaign on a temple issue.

The “game plan,” as the state BJP president explained to his foot soldiers, was to exploit the court-sanctioned entry of women to Sabarimala temple as a “golden opportunity” to mobilise Hindu voters in the state.

As elsewhere in India, an array of film stars, cricketers, retired bureaucrats and police chiefs, Sangh operatives and saffron-clad men campaigned on the issue. However, unlike elsewhere, the experiment fizzled out and the BJP failed to reap electoral dividends in the state. The party could not get a single candidate elected and could increase its vote share by only two points to 12.93%.

The reasons for that failure lie in how Kerala voted. Most people in the state voted strategically, with textbook precision, to defeat the BJP. Much like immune cells that converge to check the effects of a foreign toxin in the body, Kerala voters coordinated to neutralise the electoral effects of Hindutva politics in the state.

For oppositional politics in the rest of the country, it is important to understand the voting patterns in the state, for they hold rich insights into effectively countering the BJP electorally.

The voting pattern in the state reveals three trends. First, voter turnout in the state increased in constituencies where the BJP had better electoral odds – that is, in constituencies where the saffron party had gained more votes in the last parliamentary elections and narrowed the gap in vote shares between it (usually finishing third) and the second largest party (Fig. 1).

The strategic increase in voter turnout in these constituencies, it seems, was a response to the prospect of a growing BJP displacing the Congress-led United Democratic Front or the Communist-led Left Democratic Front as one of the two leading parties. 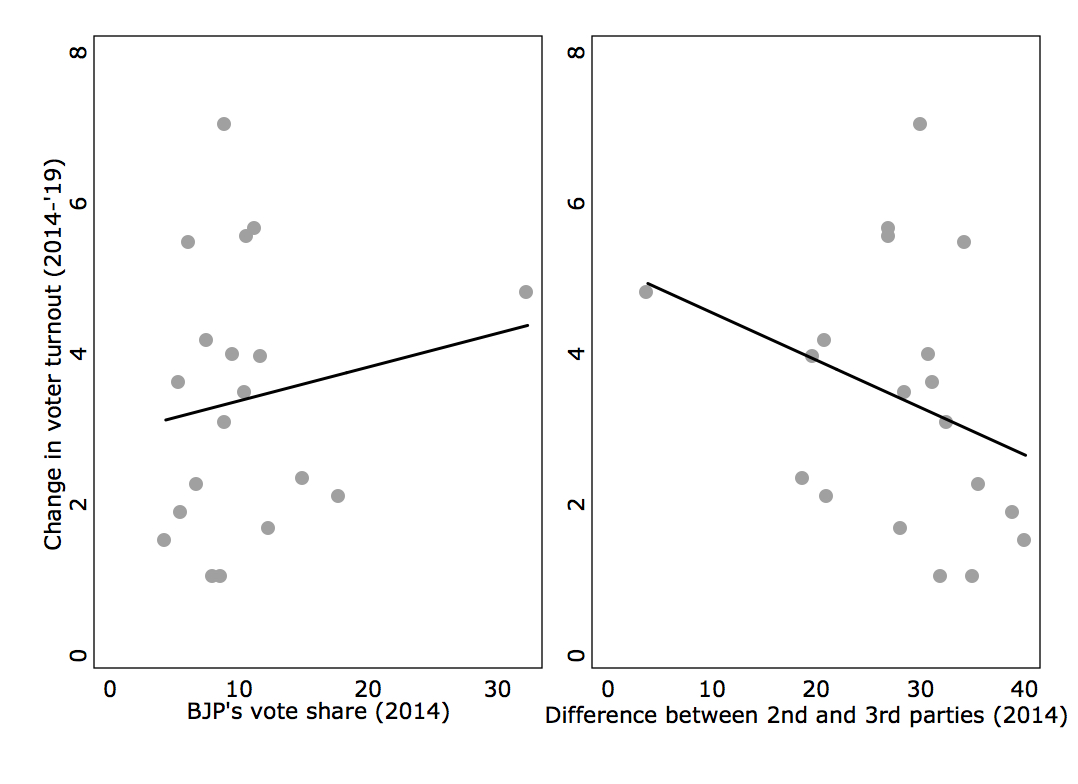 Figure 1: In 2019, voter turnout increased in constituencies where the BJP’s vote share in 2014 was greater (left), and where the gap in vote shares between the saffron party – which usually finished third – and the runner-up was narrower in 2014 (right). Data source: Election Commission of India.

Second, to prevent the BJP from displacing one of the traditional parties, most people who turned out in greater numbers on polling day also voted for either the Congress alliance or the Communists. Thus, in constituencies where the voter turnout increased, a wider gap in vote shares set apart the second and the third parties (Fig. 2).

Barring Thiruvananthapuram, where the BJP had emerged as the runner-up even in 2014, this strategic voting made sure that the BJP remained a distant third in most constituencies even when the saffron party increased its vote share. Such was the case even in Pathanamthitta – the locus of the Sabarimala temple – where the BJP candidate had campaigned dressed up as a pilgrim. 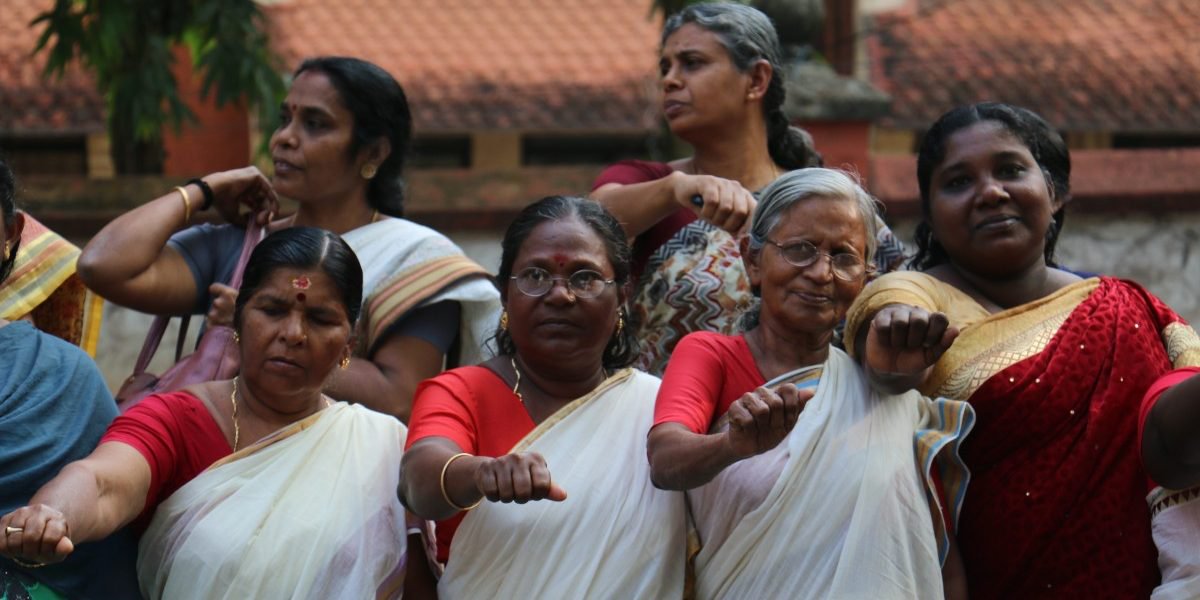 On Jan 1, 2019, millions in Kerala formed a 620-km-long Women’s Wall, to demonstrate for gender equality and assert support for the ruling LDF after the bruising politics of the Sabarimala Temple opening. Credit: PTI

This general trend of increased voter turnout sinking the BJP’s electoral prospects stands in contrast to the pattern in the 2014 parliamentary election, when increased voter turnout generally benefitted the BJP (Fig. 2). That lesson from 2014 seems to have been well understood in Kerala. Any increase in the BJP’s vote share in constituencies this time around was outmatched by even greater turnouts in favour of the two traditional parties. 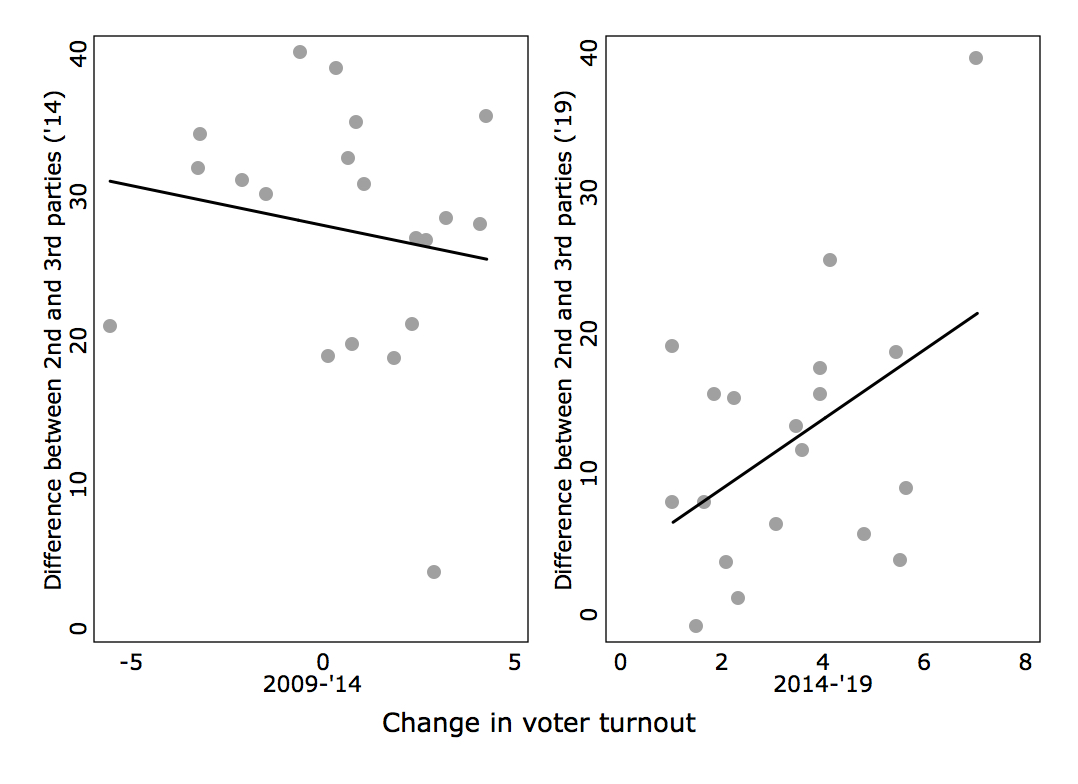 Figure 2: In constituencies where the voter turnout increased in 2019, the difference between the vote shares of the third party and the runner-up was greater (right). This was not the pattern in 2014 (left).

Third, to ensure that the BJP does not inadvertently win due to votes being split between the Congress and Communist fronts, people also chose to vote for the front that was most likely to win the seat. The wider victory-margins in constituencies that witnessed increased turnout speak to this strategic coordination in favour of the winner (Fig. 3).

In the 2014 parliamentary election, such electoral coordination did not exist. Then, increased turnout often meant more intense contest between the Congress and the Communist alliances (Fig. 3). This time, voters did not take any chances; their primary goal seems to be to ensure the BJP’s defeat. Therefore, increased turnout translated into decisive support for the winner – this time around, for the Congress front.

(As to why the Congress alliance benefitted from this strategic voting, and whether the Communists miscalculated are questions for another day. In this essay, the question is about why the BJP’s Hindutva experiment failed.) 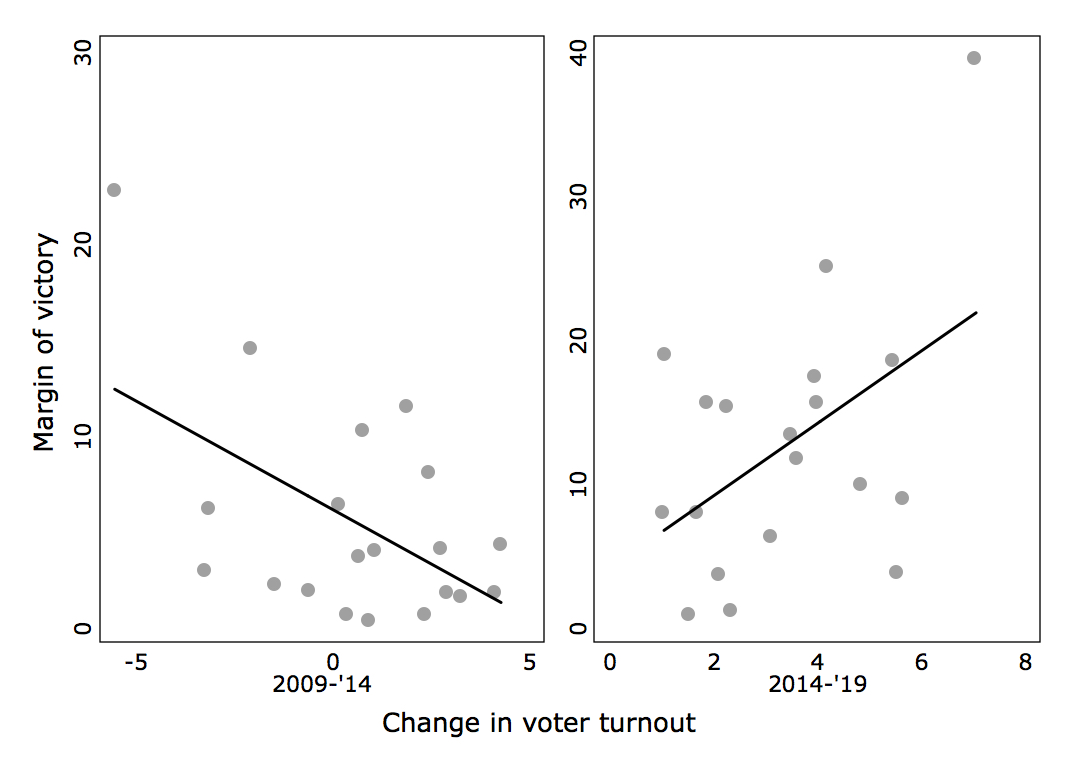 Figure 3: Constituencies that registered increased turnout in 2019 also recorded larger victory margins (right), distinct from the opposite trend in 2014 (left).

Taken together, the three trends show how people in Kerala voted singularly to defeat the Hindutva party. More people turned out to vote in constituencies where the BJP had better electoral prospects, and they voted to ensure that the party remained in the third position and to see to it that the party does not win even by chance due to split votes.

For these reasons, the BJP’s loss in Kerala cannot be attributed just to a consolidation of minority votes; it was brought about by an overall higher turnout across the state, including in constituencies where Hindus constitute the majority in the electorate.

The cumulative effects of Kerala’s historic turnout unravelled the BJP’s Hindutva experiment and rendered the party a diminished electoral presence across the constituencies in the state. Higher turnout across Kerala now relates to both meagre increases in the BJP’s vote share over time, and to overall lower vote share for the party (Fig. 4). 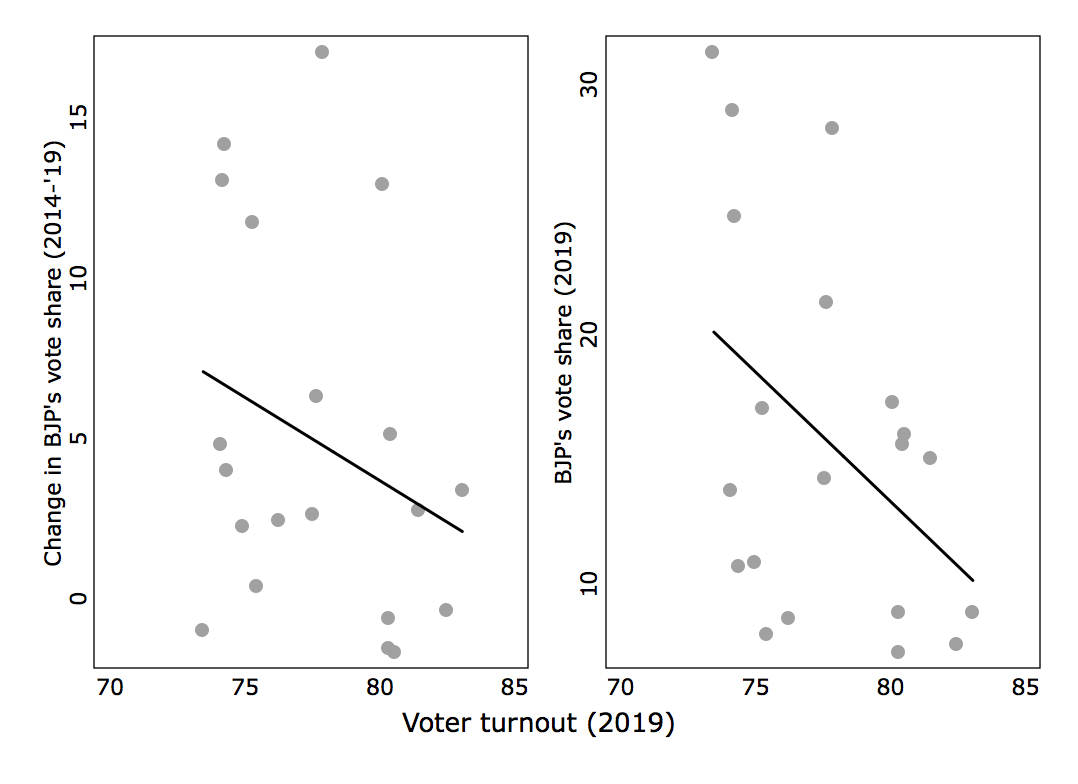 Figure 4: Higher voter turnout in the state is now negatively associated with increases in the BJP’s vote share (left), and the party’s overall vote share (right).

The voters in Kerala acted on their own to deal with the exigency of the Hindutva experiment. There was no mahagathbandhan or grand coalition congregating voters against the BJP in the state – and the cacophony of the media was pulling the voters in different directions. In several constituencies, the election was presented to the voters as “three-cornered”. Yet, the voters themselves strategically coordinated to counteract the BJP.

High literacy helps voters of Kerala in such strategic voting, but it is only one factor that facilitates electoral coordination (And the effects of literacy on strategic voting are not limited to the state).

Kerala also has a long tradition of public discussions about politics in teashops, libraries and reading rooms that generate common knowledge about the electoral context and political exigencies. Although that tradition has changed over the decades, and new arenas such as social networks have emerged, public discussions still help voters share information on the relative strengths of parties and coordinate on candidate choices.

For most Indians who did not vote for the BJP in 2019, but had their votes split among many opposition parties, Kerala demonstrates how they can strategically coordinate their voting decisions even in the absence of a mahagathbandhan or a unified opposition to effectively counter the BJP. That calls for greater political discussions and shared political knowledge among the voters.

Anoop Sadanandan is a political economist at the University of California, Berkeley, and tweets at @SadanandanAnoop.