Interview | 'I Had to Compromise With Congress to Save Democracy': MP Raju Shetti

In conversation with Shetti, who quit the NDA in 2017, about farmers' issues, the Modi government's record and more.

Shiroli (Kolhapur, Maharashtra): In 2014, Raju Shetti, president of the Swabhimani Shetkari Paksha, a two- time member of parliament from Hatkanangale constituency in Maharashtra’s Kolhapur district and the only “farmers MP”, had faced sharp criticism for joining the National Democratic Alliance. After a brief stint, in 2017, he was back in the news once again as the first MP to have quit the alliance.

Since then, Shetti has been actively working as an opposition leader, criticising Prime Minister Narendra Modi and his government in parliament for failing to pay heed to the acute agrarian crisis facing the country.

Taking a break from his election campaign at Shiroli village in the outskirts of Kolhapur district, Shetti spoke to The Wire last week about his reasons to have quit the NDA, his recent decision to join the Congress-Nationalist Congress Party alliance in the state and the “compromises” that he has had to make in the process.

The interview was conducted in Marathi and translated to English. It has been edited and condensed.

You were the first MP to have stepped out of the NDA. What were your reasons for calling it quits?

There were at least two-three solid reasons for my exit. They happened at different times between 2014 and 2017, when I finally left the party. In 2014, I decided to join the NDA coalition because of the efforts made by late Gopinath Munde (Munde died in a road accident in June 2014). Munde invited me to Ahmedabad to meet Modi. I was told that the party was ready to concentrate on the issues of development and farmers.

My instinctive response to this proposition was, “Your (Modi’s) image is of a hardcore Hindutva man. Godhra carnage is still fresh in the memories of the voters.” I wanted to know his agenda. I remember having asked him if he is going to go on Vajpayee’s path or take the old Hindutva image that he has worked on for two decades.

Modi had promptly responded that their party, with its sole Hindutva agenda, has not managed to go beyond 190 seats and that it would rather focus on the issues of development, corruption, unemployment and good governance this election (the 2014 general elections).

What were these promises made to you at that time?

I had demanded the implementation of two recommendations made in the Swaminathan Commission report. One was that the minimum support price (MSP) be raised to 1.5 times the entire cost of production, including the cost of land, and [the other was a] complete loan waiver to the farmers. I was clear that the state government alone cannot do much in such situation, when policies are made at the Centre’s level. When I laid down these demands before Modi, he said it is within the government’s capacity to offer relief to farmers.

He was a chief minister of one state for 12 years. The expectation is if a person has been the head of the state for such a long time, he would know his people’s plight. And as a head of state, he will also know if certain expectations can be fulfilled or not. I trusted his words.

The Bharatiya Janata Party had never before had much acceptance in the rural belt. And with us and many other regional parties coming together, BJP made its presence felt in the rural belt too. But once the government was formed, things changed. The development language was soon compromised and Modi was back to being his usual self.

The first blow came with the amendment in the land acquisition Bill. The main clause of consent was thrown away. The provision ensuring five times more compensation for the land acquired was removed. His ministers had taken the very soul of the law away. The process of social assessments at the time of acquisition was also compromised.

The Bill, which was painstakingly drafted and presented by several land rights activists like me and Medha Patkar after several rounds of negotiation with Jairam Ramesh (former Union minister and Congress leader), was diluted in no time.

Forget about working on the assurances he made at the time of the elections, he was out there to snatch away even what belonged to the farmers. I immediately brought the disapproval motion in parliament and eventually they could not pass the amendments.

Later, the government filed an affidavit in the Supreme Court claiming that they can’t implement Swaminathan Commission’s recommendation. If they knew they can’t take care of farmers, why did they make such blatantly false assurances at the time of the elections?

On the one hand, Modi failed to keep his promises and on the other, his men had gotten back on their job. Sakshi Maharaj was seen spewing venom at one place, at another his senior Union minister Anantkumar Hegde was seen openly claiming that his government was here to change the constitution of the country. Things that were promised in the common minimum programme was no more their agenda. 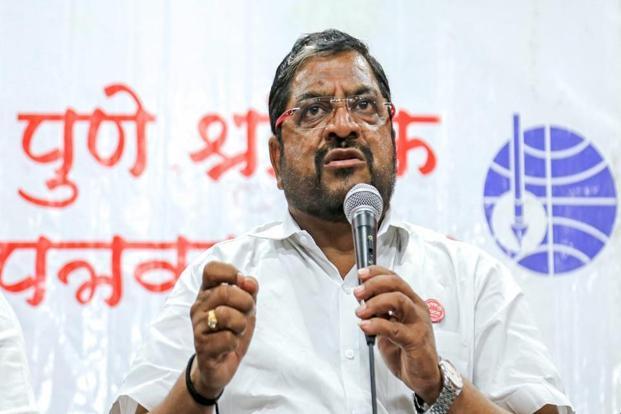 Their Hindutva agenda was back to the fore?

Exactly, they slyly got it out in the public. I had not joined them for this. I was warned by many that I would soon be decimated, I would not survive without Modi’s support. But I still decided to walk away. Others followed too, eventually.

In 2014, when you went with the NDA, several progressive fronts had frowned at your decision. You had then conveyed to your voters that Modi is here for development. Now that you are a part of the Congress- NCP alliance in the state, how are you convincing your voters this time?

I had told them then and I tell them the same thing today too. I have entered electoral politics for my farmers. I am not in the support of any “ism”. It is not like I was in support of the BJP then or in love with Congress now. Should the need arise, I will go against the Congress too, if my demands are not considered.

You had demanded seven seats where your party is strong. Later you brought your demand down to three. But at the end you got only two. Is this a compromised equation?

Well, we had hoped at least for three seats. But looking at the situation and the usual allegations that are made against smaller, regional parties that we are here only to eat into Congress’s votes and to help BJP, I decided to compromise here. Someone had to make some compromises, it was us this time.

Smaller parties that work at the grassroots level always have a better reach and visibility among people. But they don’t necessarily get similar importance while striking a deal with the bigger national parties. Weren’t you too treated badly by the Congress-NCP?

Of course, it is. Me and my people ensured the opposition was kept alive in the parliament. Others, including the Congress, jumped onto the bandwagon much later. But what can be done? We have to ensure democracy is saved. I decided to compromise with the Congress to save democracy.

How do you look at the surge of the Vanchit Bahujan Aghadi (VBA) and its decision to go alone? Prakash Ambedkar (head of the VBA) did not want to compromise on his demands and is contesting all 48 seats in the state.

I met Balasaheb (as Prakash Ambedkar as popularly known) several times. I visited his residence Rajgruha in Mumbai and tried to convince him. I kept calling him and also sent out a message through different influential persons. In the beginning, we both were keen on working something out. But later, Balasaheb was not convinced and he went his own way. And I decided to go with the Congress.

Your politics has, from the start, been against the cooperative sugar factories in the state and you have been very vocal against “dynasty politics”. But your candidate from Sangli, Vishal Patil. stands exactly opposite to each of your political stands. Is this not a double standard? He is both the chairperson of the cooperative and also comes from an influential political family – he is the grandson of three-time chief minister Vasantdada Patil.

Well, you are right, there are contradictions. But even if he is a chairman of a sugar cooperative, he has given it out on a lease to someone else to run it. So you can’t really look at him as an owner.

And what about his political lineage, which you have opposed in the past?

(Laughs.) See, his grandfather is very popular with the masses. They wanted the family to be given another chance. I too have to oblige with people’s sentiments. I decided to give him a chance.

To be honest, he still is not. But we have decided to support his candidate wholeheartedly now that we have nominated him.