Under Modi Govt, India Has Turned Into a 'Designer Democracy'

Apart from designing a Hindus-as-friend versus Muslims-as-enemy distinction, there is trickery and deception in BJP's portrayal of Modi as the only choice to lead India. 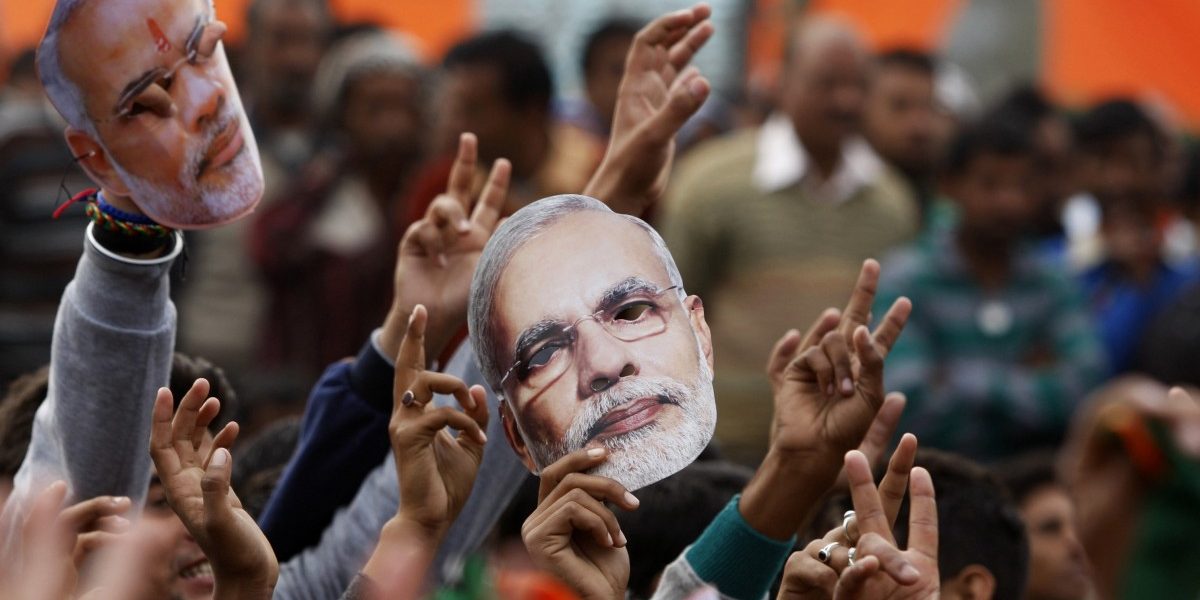 Everyone curious about the 2019 election process senses it as a radically different, even an unusual, phenomenon. However, they are uncertain what name to give it. Designer democracy is that apt name.

Like the 2014 election, the current one is also designed as a fight between friend and enemy. Enumerating the “achievements” of the government, BJP president Amit Shah wrote in its manifesto that under Narendra Modi’s leadership, we made “an India that our friends praise … and our enemies fear.”

Beyond the manifesto, the Hindus-as-friend versus Muslims-as-enemy distinction pervades recent election speeches of Modi, Shah and others.

Along with designing friends versus enemy distinction, a designer democracy has other features too. Before illustrating the Indian case, let us note that as a global phenomenon while some features of designer democracy are common across the nation-states, others are specific to each context.

The term designer is derived from design, which as a noun means a plan of a building, garment or such objects. As a verb, it means to “signify, designate, name, style”. In the field of design – in architecture, industrial design, engineering, communication, marketing, computer design and so on – it means to draft, sketch, shape and simulate.

Designers who see themselves as “scientists” maintain that design is about solving problems. However, anthropologist Tim Ingold rightly observes: “Every object of design sets a trap by presenting a problem in the form of what appears to be its solution.” One can indeed say that problem in itself rarely exists. In a democracy, something becomes a problem only when it is mobilised as one to arrest voters’ attention.

There was no specialised designer in the Indus Valley civilisation because the craftsmen who made objects were also mostly their designers. As a specialised activity, designing is typically modern, unleashed by industrialisation. So is a modern democracy. With increasing technologisation and mediatisation of lives, both design and democracy changed.

The Swiss-French architect Le Corbusier who designed Chandigarh described a house as a “machine for living.” Likewise, a society itself began to be viewed as a machine, and so were political parties. To journalist Prashant Jha, BJP is the “greatest election machine.”

What is designer democracy?

As we argue in The Algebra of Warfare-Welfare: A Long View of India’s 2014 Election, a designer democracy signifies “an electoral polity under a neo-liberal economy where voters are viewed as consumers and parties/contestants as salesmen, and the communication between them is mediated predominantly by modern electronic and visual media, including social media.” Structurally, it fully crystallised in the early 1990s with the privatisation of the economy and the growing influence of media, mobile phones and digital media included.

Integral to the structure of designer democracy is the datafication of politics. In 1956, Eric Da Costa, an Oxford-trained economist, established the Indian Institute of Public Opinion in Delhi. Likewise, political scientist Rajni Kothari copied American-style behaviouralism to use survey research to study election.

However, it was from the early 1990s that Prannoy Roy – a pioneer of opinion polls and psephology – and others accelerated the datafication of politics. Today, companies and institutes conducting election surveys, exit and other polls are numerous.

Replication of economic model in politics

The foremost feature of a designer democracy is the replication of the economic model in politics. In its 2019 manifesto, BJP views India primarily as an economy aspiring “to be the world’s third largest economy by 2030.” This aspiration echoes BJP’s 2014 manifesto where it resolved to “revive Brand India.” That is, India has always been a brand, what it needs is a revival.

In the fashion industry, a brand means “the personality of a product.” India is thus a market product in need of a salesperson. On April 15, the Times of India did a video story titled: “Why Brand Modi Remains BJP’s Biggest USP in UP?” USP stands for unique selling point/proposition, a term in marketing.

Replicating market model into politics runs on the logic of political marketing and permanent advertising central to which is the primacy of image or simulacra over reality and truth. Modi took to marketing as no one else did before. To K.N. Govindacharya, once a key BJP leader, Modi’s “forte is political marketing” informed by “images, messages and signaling.”

The BJP-RSS combine as well as the compliant media marketed Modi’s image as the only choice to rule India. Fashioning such an image, however, entails, as in marketing the ‘Iron Lady’ image of Margaret Thatcher, use of guile, perception-building, pretension, half-truth, rumours, lies and more. Like the concept of design enunciated by Vilém Flusser, trickery, image-staging, deception and plotting characterise a designer democracy.

The sheer amount of money spent on elections demonstrates it. In 2014, BJP spent Rs 5,000 crore on advertisement alone. In 2018, when five state elections were held, BJP spent more money than Netflix, Colgate or Dettol did on television advertisements.

In a designer democracy, ordinary people have little to choose from. Often they choose from more of the same. Importantly, issues of justice, truth, civic participation, the pursuit of the common good are reduced to the ratings of politicians by polls and to the calculus of mammon. Honest, ethical people cannot even think of contesting elections, let alone win them. Clearly, this damages democracy in its original meaning of demokratia in Greek: capacity to do things – by individuals and cultures.

The regnant design: The algebra of warfare-welfare

With politics as a mediatised market, what is its leitmotiv? It is polarising politics of friend-enemy dualism, intensified after the Cold War and with the designing of a new enemy in the form of terrorism. The fear of terrorism – later substituted with Islam – became a hot commodity in the political market.

Australian democracy illustrates this well. Before 9/11, Australia had no anti-terror law. By 2008, it had made 45 even as no significant terrorist attack happened on its soil. Working at Australian universities between 2009 and 2017, I witnessed many elections. Though Muslims constitute 2.6% of Australia’s population, Islam/terrorism figured prominently in elections.

In India too, terrorism became the pivot of politics after 9/11 unleashing a more dangerous version of the friend-enemy dualism. In a televised debate after 9/11, Modi congratulated the media for speaking “the truth” about “Islamic terrorism.” He held that the world had witnessed terrorism “for 1,400 years” (since Prophet Muhammad’s time).

He proudly stated that “we have succeeded in dividing the country into two camps: those who are against terrorism and those who are in support of terrorism.”

This politics of enmity marked his tenure as Gujarat’s chief minister as well as the 2014 election campaign as demonstrated by sociologist Manisha Sethi. 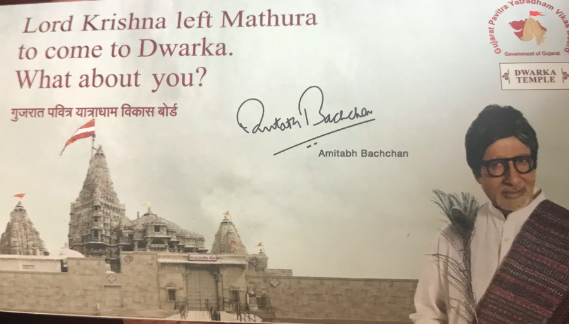 Gujarat government’s ad on the back of Air India’s boarding pass, 2019

Politics of enmity abound in 2019 election speeches by BJP leaders. Modi is determined to teach the Congress a lesson for using the term “Hindu terror” (how is “Islamic terror” justified?). While embracing illegal Bangladeshi Hindus, Shah terms their Muslim counterparts as “termites.” Maneka Gandhi openly threatens Muslims for not supporting her.

Such politics of warfare co-exists with welfare or development. However, welfare-development itself is also largely religious-ethnic. The advertisement by the Gujarat tourism department on the back of boarding pass, issued on January 8, 2019, by Air India for Delhi-Patna flight, read:

“Lord Krishna left Mathura to come to Dwarka. What about you?”

Surely, many non-Hindus and Hindus would like to visit the Dwarka temple. However, their reason might differ from the one scripted by the government.

Like the text of the government’s advertisement, democracy too can be designed differently. And humanely.

Irfan Ahmad is a Political Anthropologist and Senior Research Fellow at Max Planck Institute for the Study of Religious and Ethnic Diversity, Göttingen, Germany. With Pralay Kanungo, he is the co-editor of The Algebra of Warfare-Welfare: A Long View of India’s 2014 Election (Oxford University Press, 2019). He tweets @IrfanHindustan.