Farmers' Suicide Dictated Her Marriage, and Now Drives Her to Fight an Election

Veerpal Kaur, who lost her father and then husband to the growing spate of farmer suicides in Punjab, says neither the SAD-BJP alliance nor the Congress is addressing the issue.

Bathinda: In 1999, when the match of Veerpal Kaur and Dharamvir Singh was being considered, one thing played in their favour – both the bride and groom had lost their fathers, both farmers, to suicide. Kaur’s father drank poison in 1995 and Singh’s hanged himself in 1990.

“That was what clinched it. It was thought that the families of suicide victims could understand each other’s pain better,” said Kaur.

Her pain was not behind her yet, however. After four years of marriage, they had a three-year-old daughter and an 18-month-old son. Then her husband, burdened by new debt and failed crops, set himself on fire in 2003.

“It was horrifying. Imagine my children seeing his body,” Kaur said as she stood by a multi-seater Mahindra auto rickshaw, asking people to vote for the matka – her election symbol. Having found politicians uninterested in her woes, she decided to take matters in her own hands. 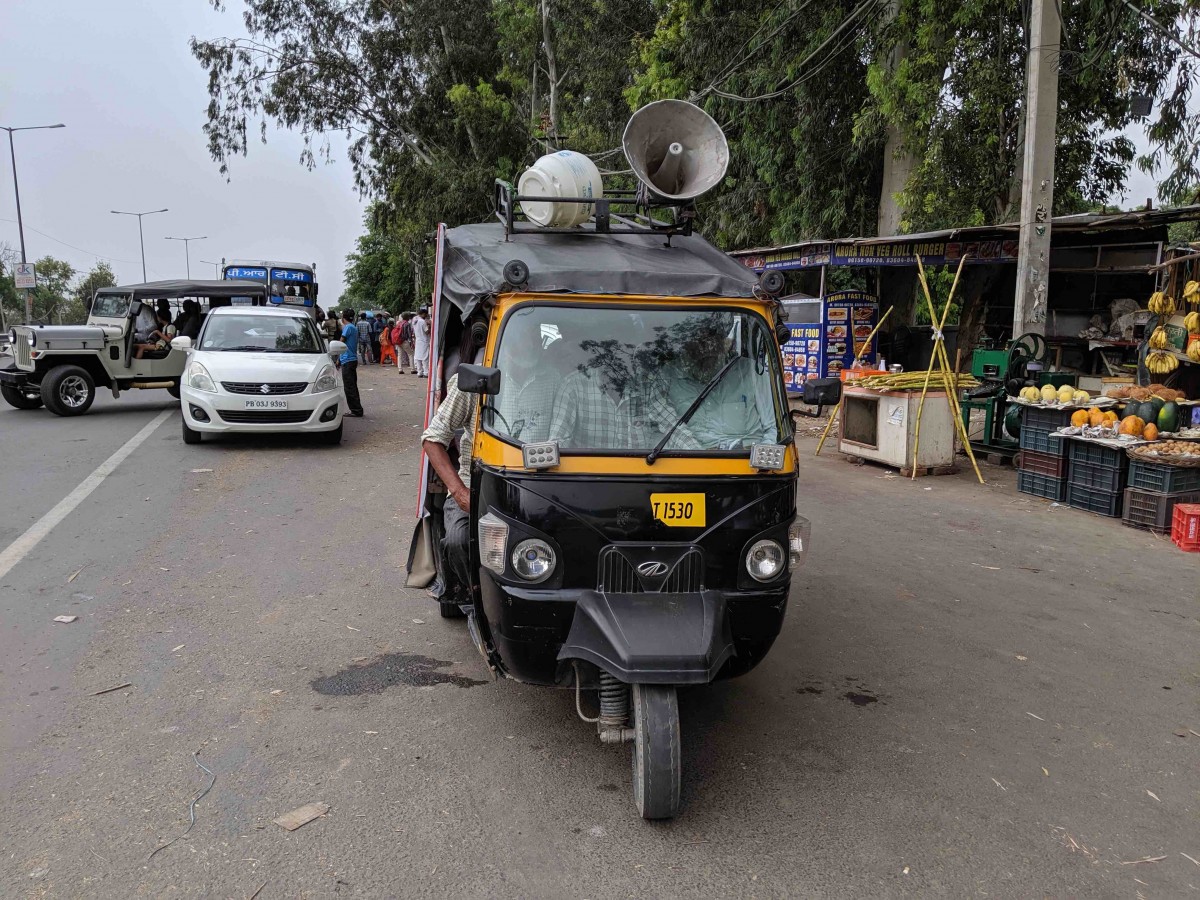 The auto rickshaw used by Veerpal Kaur for her campaign. Credit: Mohammed Mehroz

“For very long, I hoped that our representatives would do something for me and others like me. Now I realise they are here only for their personal gains. They are the modern-day Britishers,” she said. “I have to fight for myself and for the issue on my own.”

She is contesting the 2019 Lok Sabha polls from her home constituency, Bathinda, where she is challenging Shiromani Akali Dal’s (SAD) Harsimrat Kaur Badal and Congress’s Amarinder Singh Raja Warring.

Kaur knows her candidature is only symbolic. “I know I am not going to win. But I am not worried about that. I have lost a lot in life, what is one election?” she said, dressed in a printed pink kurta, with a dupatta draped around her head and blue slippers. “My fight is bigger than just an election. I want to bring the focus to the plight of the suicide victim families. Maybe I can give hope to others – that ‘If she can fight, we can too’.”

In Punjab, families whose members have committed suicide due to farm distress are referred to as “victim families”. In the last couple of decades, Punjab has become home to thousands of them.

According to data compiled by three state universities in Punjab, 16,606 farmers and farm labourers committed suicide in the state between 2000 and 2015.

“You look at the productivity of crops like wheat and rice in Punjab. They are among the highest in the world. Then, 98% of the crop area is irrigated. On the other hand, there are more than a thousand suicides every year. You pick up any local paper, and there are at least three or four reports of farmer suicides every day,” he told The Wire at his home.

Also read: Punjab – and India – Need a Voice in Parliament Like Bibi Khalra’s

The problem is not equally distributed across the state and is particularly acute in the south. According to the three-university study, 88% of the suicides took place in six districts of the Malwa region, and 3,388 in Veerpal Kaur’s home district of Mansa – a part of the Bathinda Lok Sabha constituency.

It is a problem not addressed by either the SAD-BJP alliance or the Congress, the two formations that have held power in the state, said Kaur to a small group assembled in Jeeda, a village on the outskirts of Bathinda city.

“No candidate discusses the problems faced by farmers,” she said, struggling to be audible as rain hit the tin sheet overhead. “Both parties have made promises and they haven’t been fulfilled. But we have to fight. We have to ensure that no party can ignore farmers and farmer suicide victim families. By supporting me, you are supporting the voiceless farmer who is the heart of Punjab.”

Her audience, comprising entirely of men, was receptive but unsure about what impact she is likely to have. “What she is saying is right. We understand her pain and her struggle. But the two parties (SAD and Congress) are strong here,” said Sukhbir Maan, a 58-year-old farmer.

Everyone gathered contributed to her campaign. So far, she has raised a little over Rs 14,000. The idea is to be able to cover the cost of the security deposit (Rs 25,000) that she has incurred to contest.

Kaur has been campaigning since May 4. Her day begins at 7 in the morning when she sets off in the hired auto rickshaw from her village Ralla in Mansa district. She has a light meal and a glass of lassi. She does not carry any meals with her and relies on langars in gurdwaras and the hospitality of residents in the villages she visits.

Her 19-year-old daughter, Diljot, and 17-year-old son, Abhishek, accompany her. They are both writing their college exams and divide duties between them. “When he has an exam the next day, he doesn’t travel and the same goes for me. But we ensure that one of us is there every day,” said Diljot, who is studying for a Bachelor of Arts in political science and is in the third year. The day we trailed Kaur’s campaign, Abhishek was preparing for an exam that he had to write the next day. The auto rickshaw in which Veerpal Kaur travels to campaign. Credit: Mohammed Mehroz

A couple of patrons, originally from Ludhiana and now based in Canada, are funding the education of the siblings. “When they heard about my father’s suicide, they offered to fund our education,” said Diljot.

Next, she wants to do an LLM from Punjabi University in Patiala. “I want to be able to legally help farmers who are struggling with land and payment issues,” she said. 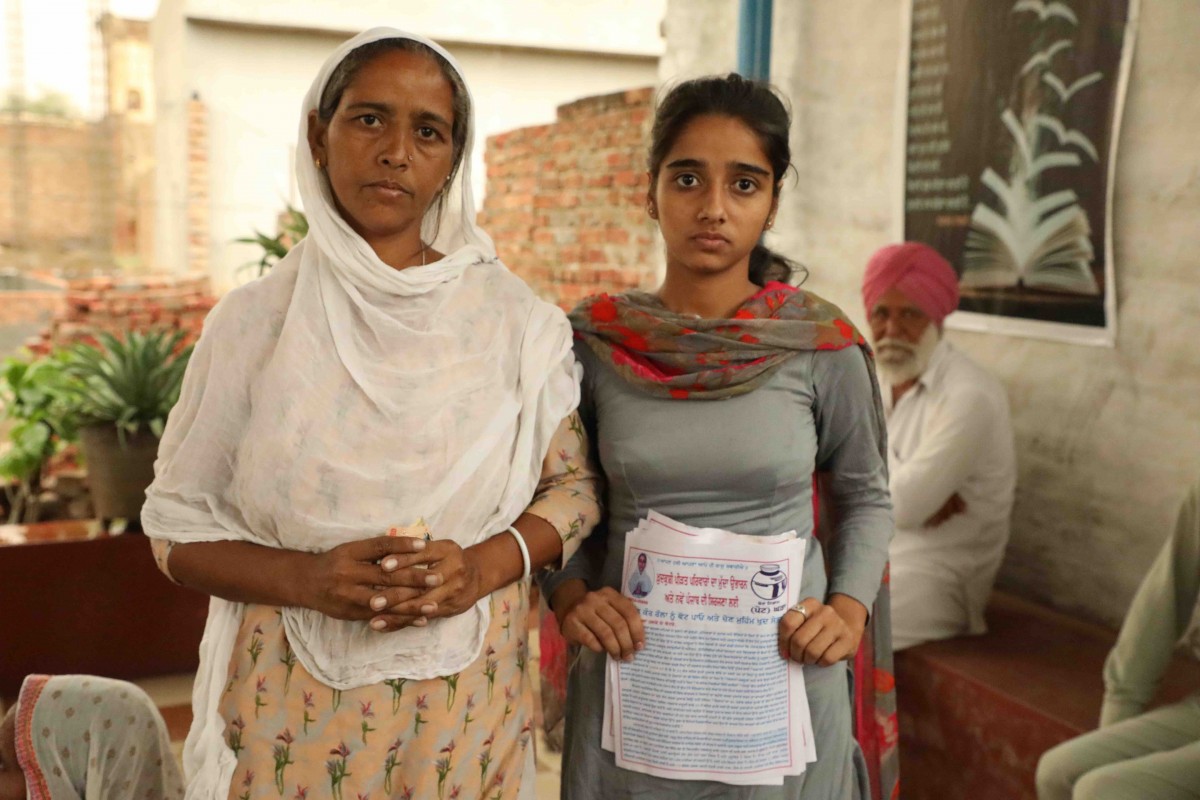 Also assisting Veerpal Kaur’s campaign are a few activists from across Punjab. The auto rickshaw they travel in is accessorised with two large flex posters with Kaur’s picture, her election symbol (matka) and the text of her appeal – and armed with a loudspeaker.

One of the activists supporting Veerpal Kaur is Kiranjeet Kaur, a gutsy and determined postgraduate student. Her father, a cotton farmer in Mansa, committed suicide in 2016. He had been burdened by Rs 8 lakh in debt after a year of crop loss and a subsequent medical emergency that cost the family Rs 2 lakh. Soon after her father’s suicide, Kiranjeet started realising that her plight was shared by several others in her village. She said, “I talked to people and I realised that around 40 families in my village alone had lost at least one member due to suicide.”

She then went to meet the ‘victim families’, as she refers to them, in neighbouring villages.

“You enter any village in Punjab, you will find a victim family. They will take you to another ten families and so on,” she said. Slowly, other people joined her and she formed a village committee, then a block committee, a district committee and finally a state level organisation called the Kisan Mazdoor Khudkhushi Pidit Parivar Committee. 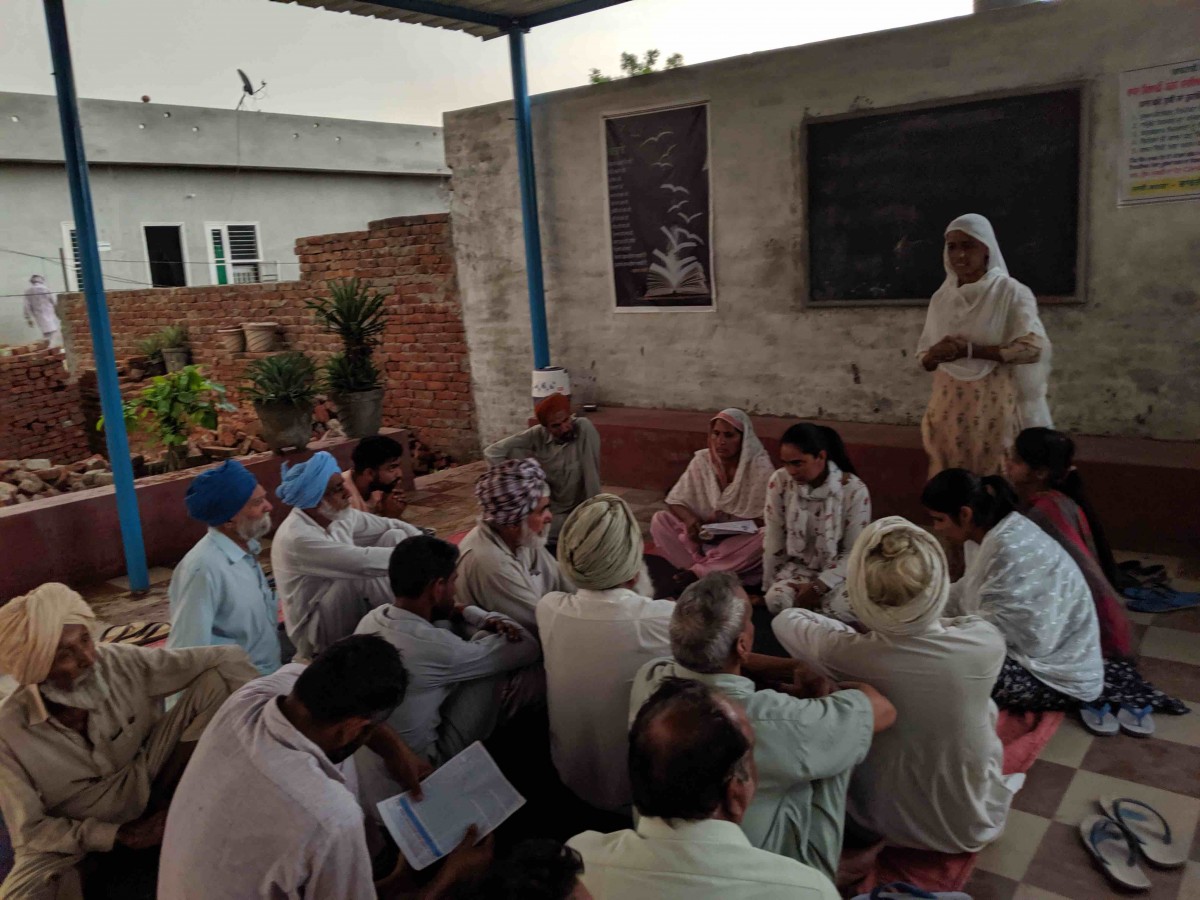 On her own, she has visited 4,500 victim families and collected information on their incomes, property owned, status of the widow pension and of children’s’ education. “We also help the families get their widow pensions and other entitlements,” said Kiranjeet.

The organisation is also a source of mutual support, where the victim families can meet each other. “We have regular meetings, and providing emotional support has become one of our major functions.”

“Saara Punjab aaj victim hai (The whole of Punjab is a victim today),”

Karan Dhingra helped with the translations from Punjabi to Hindi/English.