While some have alleged Navinchandra Bandivadekar has links to the Sanatan Sanstha, the party has denied this. Bandivadekar, who has been associated with the Congress since 2005, was seen participating in protest rallies last year opposing the arrest of Vaibhav Raut, a member of the Hindu Govansh Raksha Samiti. The state Anti-Terrorism Squad (ATS) had arrested Raut and his associates in August last year for allegedly assembling explosives at his residence in Nalasopara, north Mumbai.

Bandivadekar, in September last year, had come out in support of Raut and claimed that he was wrongly implicated in the terror case. He had participated in protest rallies organised in Nalasopara, where over 6,000 people had gathered in support of Raut.

Both Raut and Bandivadekar belong to the OBC Bhandari community. They are active members of the All India Bhandari Samaj Mahasangh, of which Bandivadekar is a president.

Although there is no evidence available to show Bandivadekar is associated with Raut’s ‘cow-protection’ outfit called the Hindu Govansh Raksha Samiti, his name has emerged on several occasions on the official web portal of the right-wing organisation Hindu Janajagruti Samiti (HJS).

Diptesh Patil, a close friend of Raut’s who is also associated with the Hindu Govansh Raksha Samiti, told The Wire that Bandivadekar knows Raut well and so decided to support him. “Bandivadekar is a well-known leader. He has seen Raut’s work from close quarters and had come for the protest meet to support him. He knows Raut, like other men, has been wrongly implicated by the police,” Patil claimed.

In a statement issued on the HJS website on September 9, 2018, Bandivadekar is quoted as supporting Raut both as someone who belongs to the Bhandari caste and also for the work he has done to “protect cows” in his vicinity.

“We are proud of Vaibhav Raut, not only because he belongs to Bhandari community but also because he works for protection of cows and protection of ‘Hindutva’. He has our full support, stated Shri. Navinchandra Bandiwadekar, the President of ‘Akhil Bharatiya Bhandari Samaj Mahasangh’; while addressing public ‘Janasamvad Sabha’ held at Dhanajay Talkies Hall at Nalasopara on 9th September,” the website states. 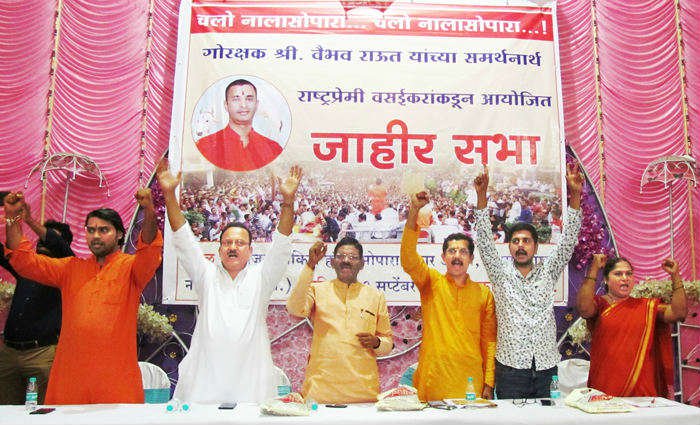 Bandivadekar’s alleged link with the HJS and its sister organisation, the Sanatan Sanstha, was first pointed out on Twitter, after which the party stepped in to defend him.

Sachin Sawant, the party’s Maharashtra spokesperson, told The Wire that the party has verified the allegations and that they are “unfounded”. “Along with being a Congressman, Bandivadekar is also an active leader of his community. Raut too belongs to the same Bhandari community. Initially it appeared as if Raut was wrongly implicated and as a community leader Bandivadekar had participated in the protest. There is nothing more to this,” Sawant said.

Bandivadekar too told The Wire that he was “intentionally attacked” and that this was a “well-crafted conspiracy” against him. “Since there is nothing else to malign my image, the BJP has launched this campaign against me. Yes, I had participated in the protest and I had sought Raut’s release. But that was done in the capacity of a community leader and Raut was a known activist of the Bhandari community. I did not participate in any Sanatan Sanstha event. I am in fact opposed to the organisation’s stand point,” Bandivadekar claimed.

Even as the Congress party issued a press statement in support of Bandivadekar, several senior leaders have approached the party high command seeking a different candidate. In response, Sawant said, “That is their individual standpoint and they have approached the party high command in their individual capacity. The party has made its official stand clear and has decided to go ahead with Bandivadekar’s candidature. He is our winning candidate and has prominence in the Ratnagiri district.”

Hours after a press statement was released in support of Bandivadekar, however, Maharashtra congress president Ashok Chavan issued another statement “clarifying” that the party is still considering his candidature and the decision will be taken only after “proper scrutiny”. “The party is opposed to radical groups like Sanatan Sanstha. Through media, we have been informed about the candidate’s alleged link with Sanatan Sanstha. We will be deciding about his candidature after further inquiry,” Chavan claimed in his tweet.

Bandivadekar joined the Congress in 2005, after spending over a decade in the BJP. In the Congress, he was a close associate of Narayan Rane’s until the latter floated his own party, the Swabhiman Party. Now, Bandivadekar will be contesting against Rane’s son Nilesh Rane from the Ratnagiri-Sindhudurg Lok Sabha constituency in coastal Maharashtra.