If Modi-Shah Return to Power, Only Rahul Gandhi to Blame: Kejriwal

Releasing the Aam Aadmi Party’s manifesto, Kejriwal hit out at the Congress president for failing to form an alliance in Delhi. 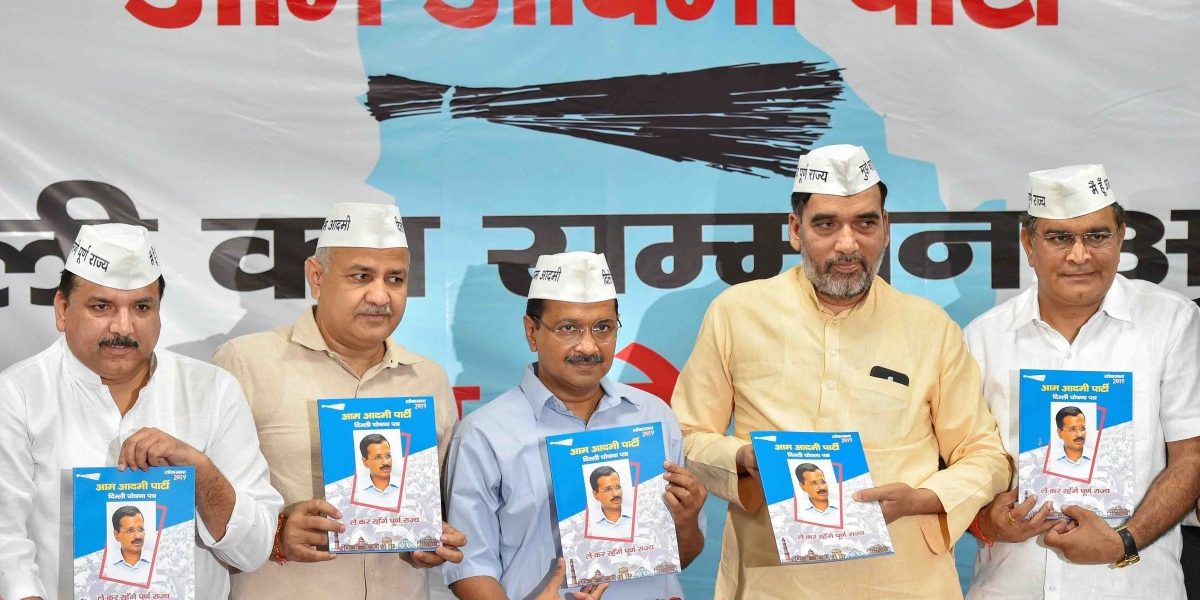 Arvind Kejriwal along with senior party leaders at the release of AAP manifesto on Thursday, April 25. Credit: PTI

New Delhi: Delhi chief minister Arvind Kejriwal today tore into Congress president Rahul Gandhi for failing to form an alliance with Aam Aadmi Party (AAP) in the state. At the launch of AAP’s manifesto, he vowed that the party “will do everything to stop the Shah-Modi duo” but held that “if Modi, Shah return to power, only Gandhi will be responsible”.

Releasing the manifesto, Kejriwal addressed a larger audience since his party is also contesting elections in other states like Haryana and Punjab.

He declared that he wants to stop the Modi-Shah duo at all costs. “We will support any grand alliance government. The 2019 election is to save nation, save constitution. We are Indians first, then Hindu or Muslim,” he said.

Since no major alliance has been formed as yet, he said, his party would support any “secular mahagathbandhan” following the elections.

The party’s manifesto has made full statehood for Delhi its main plank. It states that “AAP will fight to get statehood for Delhi” as several powers would flow through it. “With statehood, we will get Delhi Police answerable to state chief minister,” it pointed out.

Kejriwal also noted that “We will fight our battle on the issue of getting full statehood for Delhi.”

Further, the party has also promised to fill vacant government posts. It said: “Two-thirds of posts in Delhi Police are vacant”. It also seeks that “85% of Delhi government jobs should be reserved for those who are staying in Delhi.”

Similarly, it ignores the cosmopolitan nature of the capital city and demands greater reservation for people living in Delhi. “We seek reservation for students who will clear 12th standard from Delhi in Delhi University.”

The party has also promised that within a week of getting statehood, it would make all contract workers permanent.

On the issue of the three municipal corporations not reporting directly to the elected Delhi government, it said full statehood would address this issue and help in making the city cleaner.

Also, the party said it would build more houses for the people of Delhi if the demand for full statehood is met.

During the press conference, Kejriwal also accused the BJP of playing divisive politics. “Our unity is being challenged. The country can be saved only if we don’t get divided across religion and caste lines,” he said alluding to the need for the opposition parties to unite against the BJP.

Kejriwal also reminded how BJP president Amit Shah stated that the BJP would remove all “infiltrators” except Hindus, Sikhs and Buddhists. Seeing this as a direct affront on Muslims, Kejriwal said: “This proves that the BJP plans to remove all other religions except these three religions.”

On why the alliance with Congress failed to materialise in Delhi, he quipped: “Want to ask Rahul Gandhi which alliance is formed on Twitter?”