The election results show Modi has overcome his poor track record in office, but the fact that he has done so with a heady cocktail of communalism and nationalism, obscene amounts of money, unstinting media support and pliant institutions is bad news for Indian democracy. 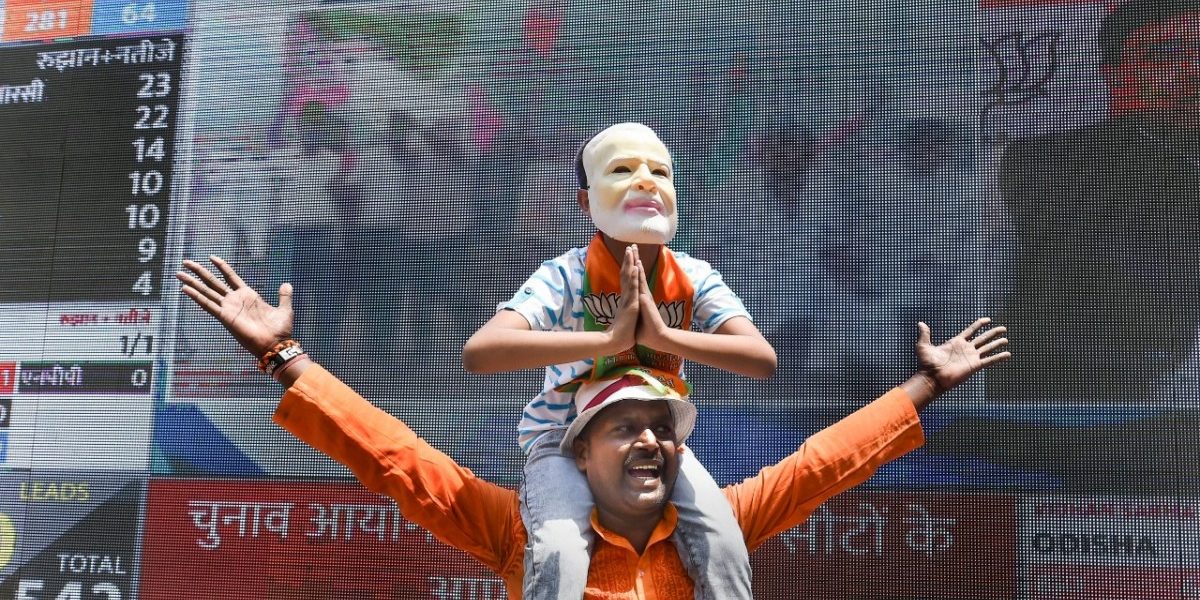 A BJP worker celebrating outside the party headquarters in Delhi. Credit: PTI

With 300 seats and a vote share that is higher than the Bharatiya Janata Party polled in 2014, Narendra Modi has every reason to feel satisfied with the results of the 2019 Lok Sabha elections.

More than anybody else, he knows how this result was produced. His extremely well funded campaign carefully avoided any reference to the promises of development he had made five years ago and relied instead on stoking fears about Muslims in the minds of Hindus and marketing himself as the only Indian leader capable of defeating terrorism.

Modi blatantly used the paramilitary victims of the Pulwama suicide bombing as an electoral prop, stooping so low as to canvass for votes in their name. It helped that the principal opposition party, the Congress, did not know how to counter this cynical strategy.

At Wardha, Modi openly sought votes on the basis of religion from Hindu voters by claiming their faith had been maligned by the prosecution of Pragya Singh Thakur for terrorist offences. He ridiculed Rahul Gandhi for fighting from the Wayanad seat, “where the minority is the majority”, as if Muslims are not equal citizens of India.

These polarising statements were shown live on television and amplified across the country by the BJP propaganda machinery, ensuring that the poison spread far and wide. In Assam and West Bengal, this helped feed into the BJP’s toxic proposal to have religion-based citizenship for migrants from Bangladesh.

When the Election Commission made it clear that it was not interested in pulling him up for these blatant violations of India’s campaign laws, Modi and BJP president Amit Shah went one step further and fielded Pragya Singh Thakur as the party’s candidate from Bhopal. Her candidature symbolised not just the valorisation of Hindu chauvinism but also of violence and terror against Muslims.

Her first public comment after being nominated was to endorse the November 2008 killing of the senior police officer Hemant Karkare (by Pakistani terrorists, ironically) because he had charged her with planting a bomb to kill Muslims. Her subsequent praise for Mahatma Gandhi’s assassin proved embarrassing enough for Modi to try and distance himself from her. Yet Modi carefully avoided making any criticism of the politics that Nathuram Godse represented. Like Pragya, he too has no time for Gandhi or his ideals; but his strategy is to co-opt and deploy Gandhi where possible, not try and justify his killing.

It would have been one thing for Modi to have won a clean fight, relying solely on his ‘accomplishments’, the public’s perception of them and their lack of faith in opposition leaders. That didn’t happen, perhaps because he knew it wouldn’t be enough and that some kind of nitro charge was needed. How is it possible for anyone to call the BJP’s victory in the election ‘Vijayi Bharat’ – as Modi wants us to do – when that means accepting Pragya Singh Thakur’s win from Bhopal as the ‘victory of India’? BJP apologists are now ‘predicting’ that Modi will disown her even more forcefully than he attempted to do just before the final phase of polling, but this makes no difference. Thakur may be cast aside the way Pravin Togadia was in Gujarat, or she may even become a minister. Modi’s aim is to inject a virus into the country’s bloodstream; once that purpose is served, the fate of the individual vector is of no consequence.

Three other aspects of Modi’s spectacular win ought to worry us. First, the use of money power on an unprecedented scale, lubricated by the new rules he himself wrote which prevent the public from learning the identity of the prime minister’s rich and powerful friends. It is these corporates who bankrolled the BJP’s lavish election campaign and advertising budget, including a 24×7 TV propaganda channel that came and went mysteriously without the Election Commission doing anything to restrain it from breaking the law. Since we don’t know who paid for the BJP’s campaign, it will be hard to pin down what the payback will be in terms of policies.

Also read: We Are Witnessing a Defining Moment in West Bengal’s Political History

Second, a major section of the media has been a willing accomplice in the marketing of the Modi cult and the over-selling of the government’s performance on its various ‘schemes’. Disproportionate time was given to Modi and Amit Shah’s rallies by private television channels. Beyond this, big media actively helped the BJP market its divisive and diversionary agendas pretty much throughout the past five years, vitiating the public sphere and helping to blunt critical assessment of the government’s failed policies. This section of the media served as a conduit for both the Sangh parivar’s communal messaging over the years – from ‘love jihad’ to Ayodhya – and the BJP’s exaggerated claims on the national security front.

Blatant lies by ministers – such as Nirmala Sitharaman’s claim that there had been no terrorist incident during Modi’s tenure – were allowed to pass unchallenged. No hard questions were asked about the security and intelligence failure at Pulwama, or about the government’s questionable response at Balakot – which led to the loss of an Indian MiG, the capture of a pilot and the killing of six air force personnel and a civilian when a helicopter was brought down by friendly fire.

Media which didn’t cooperate with the Modi government’s agenda found itself targeted with defamation suits, CBI or tax investigations and the like. Several journalists and editors lost their jobs. The country’s cyberlaws were routinely and wrongly invoked by party activists and pliant policemen across the country to create a chilling effect on social media – a source of criticism that is otherwise difficult to contain.

Third, the Election Commission’s functioning has been the most partisan in recent memory. Not only did the EC fail to act on blatant violations of the Representation of People Act and model code of conduct by Modi and the BJP but it also took various decisions that favoured the party – such as invoking Article 324 of the constitution to curtail the campaign in West Bengal on the grounds of urgent threat to law and order but then timing the curtailment to accommodate the prime minister’s rallies in the state.

Also read: Rahul Gandhi’s Big Failure Was to Not Promote Fresh Faces in the Congress

Taken together, what does a victory of this kind mean for India? To the extent to which it allows Modi and the BJP to claim everything they have done in the past five years has now been endorsed by the electorate, the stage could well be set for greater communalisation of the country, greater centralisation of decision-making, more capricious policymaking, greater leeway for big corporates and multinationals, greater hostility towards independent media and, of course, more intolerance towards dissidence.

During the campaign, for example, Union home minister Rajnath Singh promised more stringent laws on sedition. It is also clear that the Modi government’s war on institutions will now be taken to the next level. Two fortresses remain somewhat unbreached despite Modi’s efforts these past five years – the higher judiciary, and Centre-state relations, and this is where his attention will turn next. The economist Nitin Desai apprehends that Modi will use his renewed majority to try and give the Centre greater power to act as an ‘implementer’ at the state level, perhaps using the Finance Commission as a battering ram. As for the judiciary, it is certain that the BJP will make inroads over the next five years by influencing appointments.

It will take more than the lacklustre campaign the opposition put on to fight back against this disastrous agenda. The electoral machine Amit Shah has assembled cannot be fought at the tactical level with caste- or cohort-based alliances. The BJP’s strategy has been to break down the salience of caste allegiances and convert the members of all castes into ‘Hindus’. The earlier Mandal politics countered this ‘kamandal’ strategy with clever caste arithmetic but today this is no longer possible. If the BJP looks at voters as Hindus (and Muslims), perhaps the opposition has to appeal to the worker or woman or farmer or youth in them. But that is a debate for another day.