A New India Has Emerged and Narendra Modi Is Its Voice

The old order is vanishing. It had a lot of weaknesses and had become distorted, but it held true and at least held out a promise of a just and equitable society. 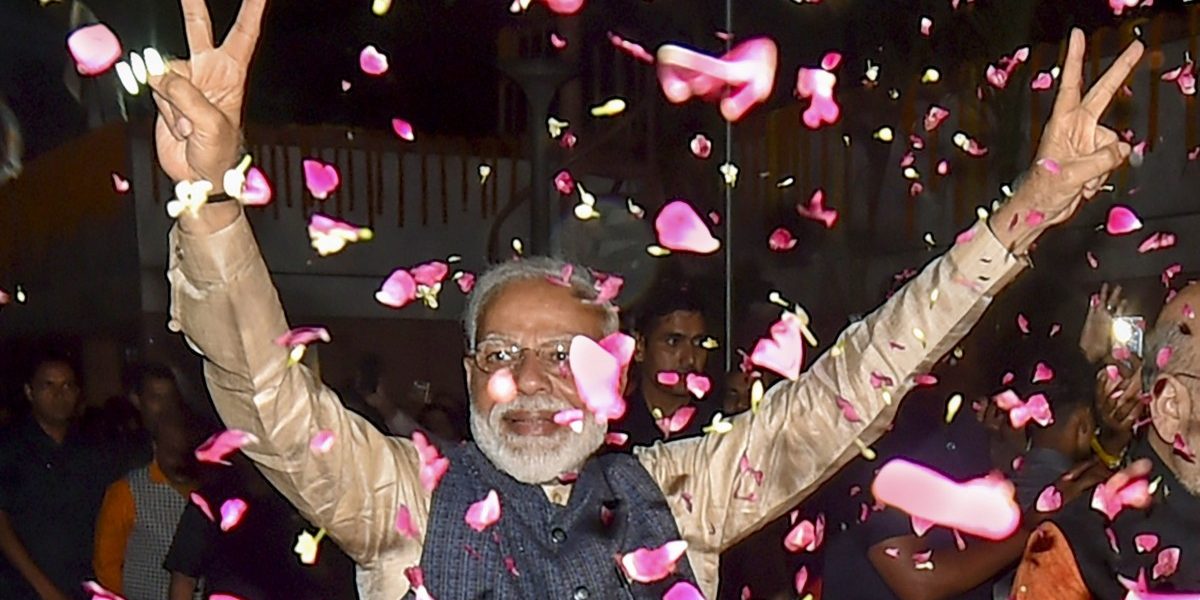 Among the many reactions on social media to the victory of the National Democratic Alliance were tweets and posts pointing out that while Atishi Marlena of the Aam Aadmi Party had lost her seat in Delhi, Pragya Singh Thakur of the Bharatiya Janata Party had won in Bhopal. The former is Oxford educated and had worked to improve government schools, the latter is an accused in a terrorism case and is currently out on bail-their respective electoral performances were contrasted with each other.

Atishi lost to Gautam Gambhir, who in his short pre-poll political career has shown he can be as hyper-nationalistic and aggressive as anyone else in his party, while Thakur defeated veteran Congress politician and former chief minister of the state Digvijay Singh. What did these results suggest about India, asked these posts.

The comparison is a bit off the mark since the voters of Delhi and of Bhopal are not the same and other local factors may have played a role, but the point is well taken. Neither did Atishi’s commitment to education impress voters nor did Thakur’s controversial remarks about Gandhi’s killer bother her constituents. While voters disregarded Thakur’s hate-filled statement, and they showed no interest in Atishi’s achievements. Atishi weakly tried to invoke her caste, thinking it would help her, but no one paid the slightest attention.

It is a sobering, even troubling thought that Thakur is going to be in the Indian parliament, the symbol of the country’s democracy; she will swear allegiance to the constitution, which stands for a secular India which she and her fellow party leaders object to. What other views will she express as a representative of the people?

On a broader level, this contrast parallels with the battle between the BJP and the opposition, mainly the Congress. The BJP has made no secret of where it stands on the question of minority rights, on Hindu dominance, on patriotism; the Congress, with its allegations about corruption and crony capitalism, its constant attacks on Narendra Modi, found no takers. Nor did its well-thought out manifesto with a plan for the future impress anyone or indeed the ‘soft Hindutva’ that the party’s brains trust came up with as a strategy to take on the BJP on its own turf. Modi’s success shows that he had the measure of the voter’s pulse, whether he asked for a vote in the name of Indian soldiers or talked loosely about the nuclear weapons. Growth, development and jobs were nowhere mentioned. Yet voters gave him a thumping majority. What indeed does it say about India?

More than the systemic problems in the Congress and in the regional parties — lack of money, poor candidate selection, weak messaging, lack of alliances — the key learning from these election results is that the emergent Indian voter is looking for something that no other party but the BJP has to offer. The BJP not just articulates this new Indian’s thoughts – often in ways that must alarm anyone concerned with the values that have been central to India so far – but is part of that new narrative. It emerges from the very social order it speaks for – the BJP is emblematic but also a product of that mindset that has taken root in modern India.

The Congress during its heyday wanted to mould the nation in a particular way; the BJP is a product moulded by the nation. Those who have voted for the BJP – and mainly for Narendra Modi – don’t merely think he will bring them whatever he promised, but also because they see themselves in him. He is not just their representative, he is one of them because he has risen from among them. The chaiwallah story, true or not, is a compelling one, because it not just inspires, it exemplifies the feeling that a humble man has shown the privileged their place.

Modi, over the last few years, has not let go of any opportunity to talk about how he has broken through the ranks of those who have controlled power  – political, social but also cultural – in India and how he has breached those elitist citadels. Phrases like Lutyens Delhi, Harvard educated or even Khan Market gang, all signal the same thing – what do these insular, refined and deracinated big shots think of themselves? I will show them. And he has shown them.

In this image, the elite is Left-liberal, secular (i.e. pandering to the minorities) and remote from the masses, i.e. the ‘real’ Indian. To this real Indian, the Muslim, the Dalit and the poor in general are needlessly asking for too much instead of working hard and making a good life for themselves. They need to be kept in their place, even if this means occasionally lynching or killing a few. The real Indian craves for order, not chaos; a powerful Centre, not noisy regionalists and structured caste hierarchies where each one knows their place. Merit is the way to rise up in life, which these Indians think they have in large measure.

Also read: How BJP Held off the Mahagathbandhan in Uttar Pradesh

It is no surprise that Modi enjoys such support even among educated professionals, especially in the cities and overseas – they all see themselves as people who have achieved everything on their own without help from anyone, by sheer talent and diligence, and not through well entrenched family networks. The possibility that they may have class and caste privilege simply does not strike them.

The successful businessman will boast about how he came from a humble background and worked day or night, ignoring how community networks may have played a role in his success; the IIT graduate who made it big in the US has no time for homilies about subsidised education in institutions of higher learning set up by Jawaharlal Nehru or the fact that he may be from the upper caste where education and access were taken for granted. Modi strikes a chord with him when he talks about his own journey from being a tea seller to becoming the prime minister–they see themselves in his image. In contrast, Rahul Gandhi looks to be a man who has done little in his life except being born into a powerful family.

Resentment is a powerful emotion and Modi not just channels it but also owns it. He speaks for the resentful because he is one of them; he – like many in the BJP and the larger Sangh parivar – has always harboured a grudge against the Nehru-Gandhis not merely because of their policies but because of their privileges. The patrician Nehru is contrasted with the earthy Sardar Patel – it is not merely their political differences but their socio-cultural ones that matter–the first went to school and university in England and mingled with the high and mighty, the second was a trade unionist who wore Indian clothes and remained in touch with his modest but ‘Indian’ roots.

This sense of alienation from the old order and the feelings of inferiority is garbed in religion. Simply being against something or someone cannot unite people; the binding factor has to be a higher cause which can provide direction and sense of purpose. The Sangh’s Hindutva project fits the bill, because it evokes something that is familiar to everyone in India. To be Hindu is the natural order of things – those who are not, are not real Indians. Decades of hammering home this point has finally borne fruit, as newer generations have grown up with no sense of history or the country.

Modi has cleverly exploited this, because he understands this sentiment. His own upbringing in the Sangh environment means he heard such propaganda from an early age. Add to that his communication skills and the crafty shaping of his persona. The optics of his meditation in a cave in Kedarnath was carefully crafted – Modi portrays the ascetic who does not want anything for himself, who is ready to live an austere life without craving from material goods and who goes back to India’s great religious traditions; At the same time he can bomb the troubling neighbour Pakistan and take on the Gandhi family.  It is all fake, of course, but for his followers, blinded by devotion, it is real. There is nothing, but nothing, that Rahul Gandhi, with all his talk of Rafale or his promise of a universal basic income, can offer as a counter to this level of symbolism.

The new Indian has spoken. In the coming months and years, he – and in many instances, she – will demand more and more. Their own man is the prime minister; he instinctively knows what they want and he will deliver. The minorities, already crushed, will be completely sidelined and their citizenship and loyalty will be questioned; dissenters will be punished and every institution will be suborned for the higher good – the greater glory of Mother India. They have a dream for India, and Modi, one of them, is the implementer of that dream.

The old order is vanishing. It had a lot of weaknesses and had become distorted, but it held true and at least held out a promise of a just and equitable society. The new India wants to discard it in toto – and from among these new Indians, Modi has arisen to take them to their true destiny.